I didn't know it would be a landmark day in Fitzwalkerstan, but I got a good hint it might be early on. That's when I saw the Wisconsin DWD leak their unconfirmed numbers on the Quarterly Census of Employment and Wages (QCEW) this morning.

You may remember this survey, it's the one that the Walker Administration used to lie to the public during the recall elections, and Walker also bragged about the numbers in the QCEW last month, while leaving out the context that the same survey showed Wisconsin to have the worst 12-month job growth in the Midwest.

Anyway, they threw out this propaganda, and the Journal-Sentinel predicatbly ran with it as a headline, trying to make it sound like a 1.5% year-over-year increase in jobs is something to crow about. It's not, and in fact, it's below the rest of the U.S., showing that it's more likely to be Obama and not Walker whp would be responsible for any increase.

But the bigger thing I noticed is that the Walker DWD released this report a few hours ahead of the monthly jobs numbers that come out on the 3rd Thursday of the month. And I knew immediately that these numbers would SUUUUUUCK.

I was right. So much so that even the J-S had to change their headline to tell folks that Wisconsin lost 7,500 jobs in October. Even then, the article goes out of its way to diminish the numbers, using Walker-like spin about how it's derived from different surveys. But the bare truth of these numbers remains- Wisconsin continues to be left out of the Obama jobs recovery in the Age of Fitzwalkerstan.

The job loss looks especially bad when you realize that the U.S. gained 171,000 jobs in the same month that Wisconsin lost 7,500. So with this awful October jobs report, the Walker jobs gap has ballooned again, and now has surpassed 100,000 jobs. 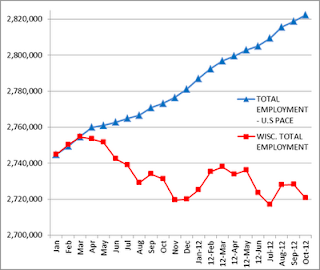 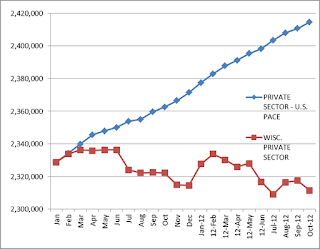 In fact, we're still nearly 34,000 total jobs and 25,000 private sector jobs BELOW where we were in March 2011, when Act 10 was passed. There is no way you can look at those charts and not notice Wisconsin lagging the naton once that (now illegal) "bomb" was passed. It also shows that the state is down over 15,000 jobs since walker won the recall election in early June, which Walker famously predicted would "open up the floodgates." Apparently he wasn't kidding, because jobs have headed to the exits since 53% of Wisconsin voters chose to retain the governor.

These stats are not "he said, she said" matters of spin- Wisconsin lags our neighbors in pretty much any jobs-related metric, and the failing policies of Scott Walker and the Wisconsin GOP are the Number 1 reason why. That trend promises to continue when the state-by-state jobs numbers come out tomorrow, with Fitzwalkerstan likely to be bringing up the rear for our area and our nation yet again.