What to look for in Wisconsin's election map tomorrow

I had a few posts along these lines before and after the recall elections this June, but I'll give sort of a quick review in advance of tomorrow's election. First, let's compare which counties have the highest amount of votes in Wisconsin, using both the 2008 presidential election and the 2012 recall election (the 2 largest turnout elections in the last 4 years). Wisconsin's 2 largest Dem areas were the top 2 turnout areas in both elections, and the top 10 places for turnout accounted for a little over half of the overall state vote in both elections.

The big shifts you see is the most Republican county in the state (Washington County) jumping over Blue-leaning Kenosha and Rock Counties. I'd also count on Winnebago County jumping back up a bit, as college students are back in Oshkosh for this election, and that also could play a role in the hotly-contested King vs. Gudex State Senate election (where an absurd amount of jack has been thrown in- this wasteful election spending has to be stopped).

So that's where the turnout game could have an effect, especially if Dane County and the City of Milwaukee pull nearly 20% of the vote between the two of them and Waukesha County is diluted down below 8%. If Rock and Kenosha Counties can outvote Baggerific Washington County, this is also an advantage for Obama.

I also want to show the contrast in the two electoral maps from 2008 and 2012. First I'll give you Obama's blowout in 2008, and you'll see that the real secret behind Obama's large margin of victory was how well he did in rural and especially Western Wisconsin (shown by the darker shade of blue). 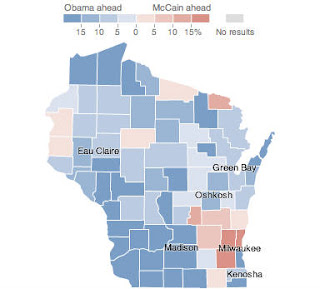 Now compare that map with the Walker victory in June's recall election, and look at how many counties flip over. 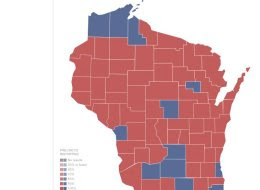 You may also remember I did a on the eve of the recall election showing which districts swing the most in Wisconsin. In particular, I pointed out 4 (2002-2010) Senate districts that had flipped and flopped a lot between 2008 and 2010.

And I'd imagine those areas play a big role this year. The other ones that clearly stand out are the Green Bay and Fox Cities-area counties, especially the big ones like Brown, Outagamie and Winnebago. Marathon County (Wausau and nearby area) is the other one I'd look for. It's traditionally blue-collar Dem and Obama won it by nearly 9% in 2008, but Walker pulled 62% in the same county in the recall election.

So those are the quick numbers to look for. Going directly in the middle between the 2008 prez election and the 2012 recall election would put it around a 4-point victory for Obama in Wisconsin. Nate Silver says 5%, both seem about right. The real one to look for is the Baldwin-Thompson Senate election, and that's where the turnout numbers in Dane and the City of Milwaukee could be very big.

And it better be clean tomorrow, without something that turns Wisconsin into a Florida or Ohio-style national laughingstock. (I'm looking at you, 262 area code). Get out, VOTE, make sure your friends VOTE, and make it happen folks!