Last week, we saw another illustration of how rural Wisconsin continues to die in the age of Fitzwalkerstan, and the same study illustrated how people are choosing progressive, growing places to work and live in, both within the state, and in heading outside of the state. 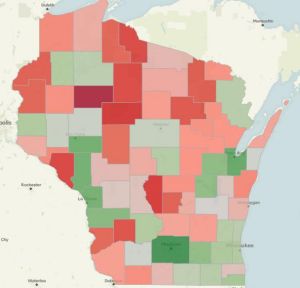 Look at the heavy green concentrated around Madison, as Dane County was the fastest-growing county in the state at 1.42%, and now has over 500,000 people. By comparison, look at the huge swaths of red in the northwestern 2/3rds of the state- people all over that part of the state are taking off and not being replaced.

Let's start with Dane County's growth first. More than 7,000 more people live here now than in 2011, and the county grew for all 3 major reasons that the Census Bureau gives- a younger population, attracting people from other parts of Wisconsin and the U.S., and in getting immigrants from other countries to settle here.

Dane County accounts for more than 40% of the state's total increase in population of 16,555. It is also by far the county that with the largest number of people moving into it for 2011.

You can see that number gets small very fast, and in fact, only 22 of Wisconsin's 72 counties had more people moving in than moving out in the first year of Fitzwalkerstan. This is an obvious problem when it comes to creating jobs, as you have to have people wanting to live somewhere in order to improve your chances of finding qualified employees.

Interestingly, Milwaukee County was the second-fastest growing county in the state (+3,288), but also had the highest number of people LEAVE, with net domestic migration at -5,236. So how did it gain? A young population that 6,776 more births than deaths, and an net increase in immigrants of 1,752.

Compare this to Waukesha County, which gained 1,142 move-ins, but only gained 484 people in births vs. deaths, despite having a population not much less than Dane County. And Ozaukee County is even older- births vs. deaths are nearly even. Sorry Charlie, but the long-term demographics are moving against you guys in Redland, and toward us goofy libs in Madison and Milwaukee. No wonder why WisGOP is so desperate to grab power in the dwindling time they have left.

And older demographics are a big reason behind the 44 Wisconsin counties that lost population in 2011. 19 of those counties are now estimated to have more people dying in them than being born, (and the same is true of 3 more counties that actually had population GROWTH, due to more people moving there). You will find these counties heavily concentrated in northern and eastern Wisconsin, including many retirement areas.

The other reason these places are losing people are move-outs. Milwaukee County may have been the biggest loser in net migration, but of course there are also a whole lot more people in Milwaukee County. When you look at it by percentage, it shows that the real places where people are leaving are around the Highway 29 corridor, the non-retirement areas of the Northwoods, and the poor areas of southwest Wisconsin.

I've pointed out before that rural Wisconsin is an area that's taken some of the biggest hits in the Age of Fitzwalkerstan, and with people continuing to leave, and only older people remaining in these places, it means property tax rates are likely to rise and lead to more decline. This is especially true when you consider these areas of Wisconsin were built on quality public education and services, which kept it afloat while a lot of rural areas in other states died. Now combine the lack of jobs and lack of people with this administration's lack of respect for the natural beauty that is part of many of these areas, and you can see where folks would see no use in staying. If this trend is to continue, we will see an even more uneven distribution of population than we see today in Wisconsin, and a loss of this state's rural flavor that helped make it the unique place that it is.

So the Census is indeed telling us a story- small-town Wisconsin declined in the Age of Fitzwalkerstan, while the larger-population areas of Wisconsin continued to grow. Some grew due to favorable demographics, like Milwaukee, and some grew by attracting people to move there, like Waukesha County, Green Bay, and La Crosse. And Madison got the best of both worlds- good demographics and a high quality of life that encouraged the most move-ins in the state. Sorry right-wing radio, but Dane and Milwaukee Counties don't seem to be changing this direction of higher population any time soon, which is brutal news for any Republicans that think they can diminish and isolate these blue counties. More likely, we'll be the ones calling the shots in the very near future, especially if young people contunue to leave rural Wisconsin, and red-voting suburban Milwaukee stalls out and literally dies off.