I figured there was more to the story when the Wisconsin DWD threw out a press release on Thursday bragging about new benchmarking stats which added tens of thousands of jobs from the previously brutal state figures. This benchmarking happens every March and tries to correlate the figures with the Quarterly Census on Employment and Wages (the same stat Scott Walker lied about right before the recall elections), and it also explains why there was such a delay on these figures from the last report in December.

But the revisions still only result in tepid private sector job growth of less than 1% for all of 2012, and less than 45,000 jobs created overall since January 2011. Even with a big seasonally-adjusted jump for January 2013, there has only been 67,000 private sector jobs created in the 24 months that have elapsed since Walker took over, meaning the state is on pace to fall more than 100,000 jobs short of Walker's goal of 250,000. I also knew that the U.S. and the other Midwestern states had been growing in a faster rate, so I was waiting for the state-by-state report to see some context for where Wisconsin really stood.

It came out today, and yep, our numbers are even worse than we previously thought. Mike Ivey of the Cap Times put it together and found Wisconsin to be 44th in job growth in Walker's 2 years.


The new numbers, based on the most accurate current measures available, show Wisconsin with an estimated 2,790,000 non-farm positions as of January 2013 — up 44,600 jobs or 1.6 percent since January 2011 when Gov. Scott Walker took office.

As one of the execs at WEDC so accurately put it:  "We suck, we're bad."

The Walker jobs gap charts still show that there's a major drop-off between Wisconsin and the rest of the country. You'll also notice that instead of job creation "taking off like a rocket" after the June recall election, as Walker promised, it actually smacked into a brick wall once Scotty was retained while the country as a whole kept growing. 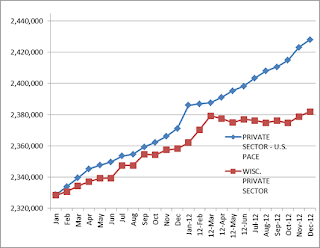 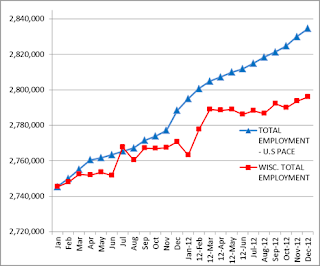 A couple of caveats for the January numbers to keep in mind going forward. First is that January traditionally has one of the largest seasonal adjustments made to the raw, unadjusted numbers. The BLS report indicated that 82,000 fewer people were working overall, and over 48,000 less in the private sector than there were in December. But because these are lower-than-expected seasonal layoffs, it comes in as a "gain." It's kind of sad to note that January and February have been the best-performing months for jobs under Walker, which makes it sort of a "tallest midget" award over actual improving conditions.

Second is that the preliminary numbers showed a "drop" of 19,400 government jobs in January, but those losses are inflated due to the late MLK holiday, so college students and graduate researchers wouldn't be back on the job, so I would think we'll see a large revision upwards in that number for February. On the flip side, with the weather taking a turn for the worse in February and March, I bet we don't see the increases we saw for those months in areas like Construction and Bar and Food services, (we're not having St. Patty's beers on the Terrace like we were this time last year). So let's see where those trends take us in the next 2 jobs reports.

But the bottom line for now is that despite the positive revisions, Wisconsin remains a laggard compared to our neighbors and the rest of the nation. And with these revisions being based on the QCEW figures from much of 2012, I bet it won't be the last disappointing report to come out in Fitzwalkerstan in 2013.
Posted by Jake formerly of the LP at 9:23:00 PM