The week's big news was that Scott Walker's preferred jobs metric confirmed what every other jobs stat had shown- that things had nosedived since he took office, with Wisconsin ranking 44th in the nation in private sector job growth from September 2011 to September 2012, and dead last in the Midwest.

While there are plenty of charts that can sum up the economic debacle in Fitzwalkerstan, I think the J-S's chart explained it quite well. It shows that Wisconsin outperformed the U.S. in year-over-year job performance for the 11 months before Scott Walker took office in January 2011. Since Scotty signed Act 10 in March 2011, the state has been BELOW the U.S. in job creation for 17 of the last 18 months measured. 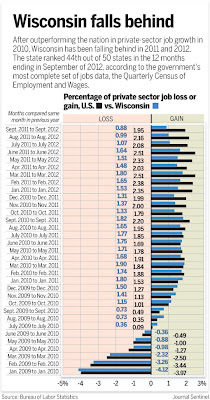 Any question as to why? Not in the above-ground world. Hilariously, if you go the the handy-dandy QCEW interactive site, you'll see that Wisconsin did lead in job growth for one category- State Government jobs.

And even this number is a damning of Walker austerity, as 8,000 state government jobs were LOST between June 2010 and June 2011 (with Act 10 and the passage of the Walker budget going in during that time period), in no small part because of nearly 19,000 retirements from workers who weren't going to put up with Walker taking thousands of dollars from their pockets. Since August 2011 and September 2012, 6,000 of those jobs have been hired back, as state governments have had to cover for the retirements and Walker has had to cover for the administrative failures such as the short-staffed WEDC. So the abuse of state workers in Act 10 hasn't cut much off of the state work force, and cost the Wisconsin economy hundreds of millions of dollars in lost take-home pay for those workers (it's not like anyone got a tax cut or added services from the state-level cuts for Act 10, it just got funneled into future tax cuts for corporations).

And the numbers going forward from end of the QCEW report in September don't help either, as reiterated by Thursday's release of the February jobs report by Walker's DWD, which showed another 2,300 private sector jobs were lost and the unemployment rate ticked up to 7.2%. This occured in the same month that well over 200,000 private sector jobs were created in the U.S., which added another 7,600 to the Walker jobs gap, putting that number well above 40,000 in the Age of Fitzwalkerstan. 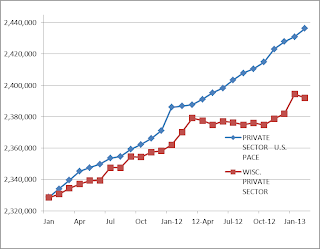 Now interestingly, seasonally-adjusted total jobs went up by 12,100 for February, but that's more to a reflection of MLK weekend and Winter semester starting later than normal for UW System schools, so these job changes weren't caught in the January report like they usually are (causing a "loss" of 10,600 government jobs in January and a "gain" of 14,400 for February- net difference is +3,800, which is more plausible.) This gives a cosmetic uptick for the month, but still puts the total Walker jobs gap at 32,000. 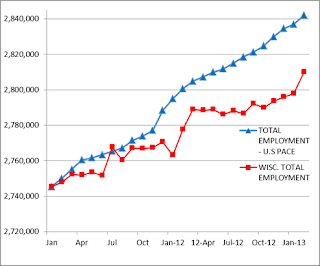 And notice that we had a big bump in March of last year, in no small part to the record 70 and 80-degree temperatures that hit for a sizable amount of that month. That sure isn't the case this year (there's still snow on the ground outside of my window), and you can bet that many of the 9,000 jobs in March 2012 that were pushed forward due to the early Spring/Summer aren't going to show up for this year.

So when you combine this week's awful QCEW report with the medicore-at-best job figures of the 6 months after it, don't count on Wisconsin to pull itself out of its current "last in the Midwest and bottom 10 in the U.S." job stats any time soon.