The swinging Kleefisches! And other GOP corruptions

Couldn't help but notice this strong bit of investigative reporting by the State Journal's Dee Hall, who discovered State Rep. Joel Kleefisch (aka the husband of Lieutenant Governor Rebecca Kleefisch) and Wisconsin GOP megadonor Robert Eisenga teaming up to try to limit the amount of child support that could be paid by rich people. And I'm sure this will shock you, but they aren't doing this for the greater good.

Kleefisch’s bill also would prohibit judges from taking into account a parent’s assets in determining the level of child support.

Court documents show Eisenga, a Columbus developer, owner of American Lending Solutions and the former mayor of Columbus, was ordered to pay a minimum of $15,000 a month for his three children based on his 2010 income of $1.2 million and assets of $30 million.

The bill drafting records, which include emails, letters and handwritten notes, show Eisenga and his attorney, William Smiley of Portage, made numerous suggestions for changes to the bill aimed at helping Eisenga lower his child-support payments.

Eisenga wasn't exactly qualifying for Father of the Year before this bill either, because in May 2012, a Madison TV station reported Eisenga had put his kids on Badgercare after his divorce, despite having assets of more than $20 million. Unlike his kids' health care, Eisenga had no problems paying for politicians, as the article notes he his ex has given over $41,000 to Republicans in the last 8 years, including $3,500 to Joel Kleefisch, $7,500 to Kleefisch's wife, Lt. Gov. Rebecca Kleefisch, and $15,000 to Governor Scott Walker. This includes $5,000 that Eisenga gave to Walker last March, when he allegedly wasn't making enough to provide for his own kids' health care.

We already knew Eisenga's dedication to the Wisconsin GOP went beyond throwing money to candidates. He also was the guy who hired Walkergate criminal Kelly Rindfleisch after the heat from John Doe 1 got too hot before the 2012 recall elections. And what the "business" he and Rindfleisch were in seems as legitimate as United Sportsmen of Wisconsin.

A former aide and campaign worker for Governor Scott Walker who faces misconduct charges was affiliated with a business with ties to the largest alleged violator of the state's No-Call List.

Nevada state records show Kelly Rindfleisch as affiliated with National Lending Solutions, a business with a Columbus address, between December 2011 and March 2012.

Milwaukee County's district attorney has charged Rindfleisch with misconduct in public office for allegedly doing campaign work while on-the-job as deputy chief of staff for then-Milwaukee County executive Scott Walker. Rindfleisch was criminally charged at the same time she was listed as the business reservation holder in Nevada.

And it's not surprising that Eisenga would choose Joel Kleefisch to try to sneak this child support bill through, because we already know J. Kleefisch can be bought, and will go to the wall for those who buy him. This was best shown in late 2011 and early 2012 when he told the Walker-appointed DNR official (and ex-state Rep.) Scott Gunderson to back off fining Herr Environmental as Herr was literally spreading shit near Oconomowoc.

Gunderson and other DNR administrators sought to iron out the problem in meetings with Herr and Herr’s state representative, Joel Kleefisch, R-Oconomowoc, who interceded on his behalf, records show. At one meeting, on Dec. 13, Herr said he spoke with [DNR Secretary Cathy] Stepp who assured him “no citations or forfeitures would be required,” according to [a DNR wastewater specialist's] notes.

Stepp, who declined several requests to be interviewed for this story, denied in an email she made such a claim to Herr. Asked if she knew Herr or had business dealings with him in the past, or if she spoke with him at all during the enforcement case, Stepp responded, “All are ‘no’ answers.”...

At a second meeting, on Dec. 20, Kleefisch — who also received $100 in campaign donations from Herr and whose wife Rebecca received $2,250 from the Herr family during her campaign for lieutenant governor — challenged Gunderson to reconsider the citations the DNR was weighing against Herr.

We know that Joel's wife Rebecca is also free to spread around affection to GOP supporters, as shown last month when she asked oligarchs in Beloit "How can we love you more?" when it came to proposing "tax reform" in Wisconsin. As the Root River Siren well put it, Becky has shown she's more than willing to trade keys with campaign contributors when her and Joel attend their little get-togethers. 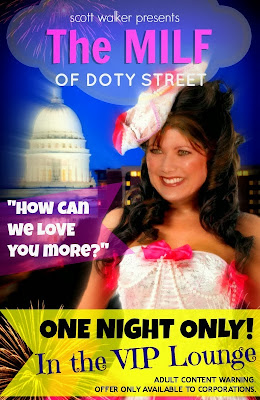 And it all interconnects so well between the Kleefisches, influence-peddlers like Michael Eisenga, and GOP donors and officials. You think I was kidding when I called WisGOP one large, incestuous organized crime family? I wasn't. It makes for quite a bizarre bunch of love triangles, but they inevitably connect back to each other at some point. I just wish we had a real media outside of Dee Hall and a few others to look into those connections further.