This week in Walker Admin hackery

No, I didn't watch a minute of the State-of-the-State last night. Instead I got my quota of swearing in by watching the Badgers fail to play defense for the 3rd straight game and lose by 13 to the friggin' Gophs.

But I can't help but laugh at this story. "Welder lauded by Scott Walker in speech is sex offender." CLASSY! The story refers to Christopher Barber, singled out by Gov Walker at last night's speech, and here's more from Dan Bice.

"These are the faces of an improving economy in our state," Walker said Wednesday of Barber and others. "Wisconsin is going back to work."

But there is a reason that Barber -- a resident of Two Rivers -- has had trouble finding steady work in the past.

Records show that he is a registered sex offender with two felonies and three drunken-driving offenses. Because of his checkered past, Barber has been in and out of jail and prison for much of the past decade, with his probation having been revoked at least twice.

Tom Evenson, a spokesman for Walker, said the administration had contacted employers in the state to see if they could recommend workers hired since Walker took office in 2011 who would be interested in being mentioned in the annual speech.....

Ann Stilp, head of corporate communications for Ariens, acknowledged Thursday that the Brillion-based company -- which makes snowblowers and riding mowers -- had suggested Barber.

"We recommended him based on his performance on the job since he has been employed with Ariens Company beginning December of 2012," Stilp said. "As part of recommending him for the speech, we did not know the details of his record."...

The governor attended the company's 80th anniversary celebration in the fall, and he has received nearly 40 donations from Ariens employees, even though the total income has been a rather modest $4,625. In 2011, Walker appointed company CEO Dan Ariens to the Wisconsin Economic Development Corp. board, where he is now the vice chairman.

And Dan Ariens has another big role, as he's the Number 2 guy at the right-wing Wisconsin Manufacturers and Commerce, and sits on WMC's board. You don't think that had anything to do with using Mr. Barber as a human prop at Walker's speech, do you?

In fact, it's quite reminiscent of another Republican who used the blue-collar workers at a big-time GOP donor's business as the backdrop for an election event. 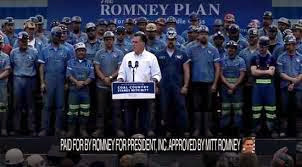 First class indeed. Then again, competence has never exactly been the biggest reason Walker's staffers have gotten hired. After all, this is the same crew that told the Gov, "It's David Koch on line 1!"

See, Bice is under orders from saying this, but I'm not. A prior felon (who's trying to do the right thing) being put on display at the State of the State address is not the big deal. What's significant is that this Administration operates on a pay-for-play basis, with a bunch of dimwits behind the scenes at the Capitol.
Posted by Jake formerly of the LP at 7:27:00 PM