Right before Christmas, we got more indications that the U.S. economy is closing out on a high note for 2014. The Bureau of Economic Analysis revised up the nation's growth in Gross Domestic Product in the 3rd Quarter of 2014, from 3.5% up to 5.0%. Increased amounts of inventories and other business spending raised the number to this high level, and when combined with the 4.6% growth in Q2, it now makes 3% GDP growth for 2014 a real possibility, even with the polar vortex causing a temporary cutback in Q1. It now puts the Obama Recovery back on its track, and you can see the growth picking up over the last two quarters. 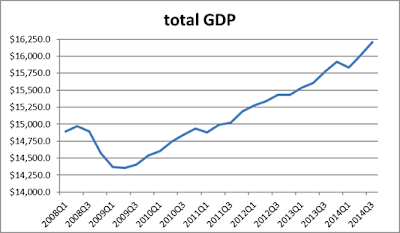 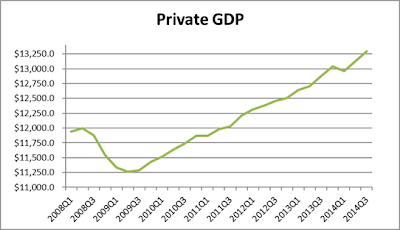 This week also gave new indications of good income growth (up 0.4% in November), and a good rise in real disposable income (up 0.5% for that month). These numbers reflect not only increases in money coming in, but also the drop in gas prices causing slight deflation for November. with the decline in price levels over the last couple of months (especially in gasoline). Combine that with the DOW closing over 18,000 for the first time ever (if you're lucky enough to own the right stocks), and it seems like good times nationwide.

Yes, there are still serious inequality issues and a long way to go before it seems like the 1990s anywhere but Wall Street, and let's not lose sight of that. But 2014's economic performance has definitely killed the idea that newly-installed higher capital gains taxes would lead to people to pull out of the stock market. And it also proves that the first year of Obamacare insurance exchanges haven't exactly been the economy-killer that the Tea Party crowd kept telling us it would. In fact, there's strong evidence coming in that the number of people getting insurance through those exchanges for next year is significantly higher than what the U.S. Department of Health and Human Services predicted.

So why would we ever listen to policy advice from the trickle-down dimwits and anti-Obamacare TeaBags that have gotten it all wrong for the last five years?

P.S. Here's UW Professor Menzie Chinn's take on the strong GDP numbers from the Econbrowser blog.
Posted by Jake formerly of the LP at 6:16:00 PM