One great jobs report, and one bad track record

I found it interesting to see that the Wisconsin Department of Workforce Development put out their monthly jobs release in the morning, as opposed to their typical release time in the early afternoon. As you’d expect from the tactic, those early-release numbers were great, with 16,500 seasonally-adjusted private sector jobs added in November, and October was revised up by another 6,900 jobs. These are blowout numbers that go well beyond the expected increases of around 6,000 that the state should have in a November that added 321,000 jobs nationwide.

We’ve had false starts like this before (we gained more than 10,000 private sector jobs in October 2013 and over 20,000 for the last 3 months of that year, and then quickly fell back to mediocrity) but the gains are still impressive. 35,500 new jobs over the last three months makes up for the bad jobs numbers that we suffered through in the first 2/3rds of 2014, and now bumps up job growth to 45,000 for 2014. If those numbers hold, it would be the best job growth the state has seen in the four years Scott Walker has been in office, and the Walker jobs gap is back below 56,000 jobs- which is still 10,000 more than it was at the start of this year, but certainly the last three months have narrowed the gap. 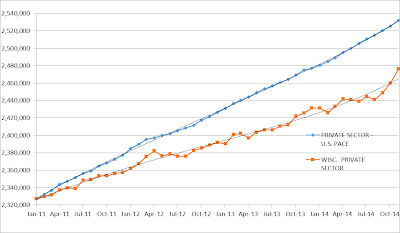 However, I also figured there was a reason the monthly jobs numbers were dropped early in the day by Walker’s Department of Workforce Development. It was because the “gold standard’ Quarterly Census on Wages and Employment came out at 9am, and it wasn’t so hot. This more complete survey covers the June 2013-June 2014 time period, and it shows Wisconsin to be 32nd in the nation for private sector job growth, at 1.47% (just over 35,000 jobs). Even worse, after being 5th in the Midwest for private sector job growth in the March QCEW, Wisconsin has now dropped back into last place among our neighbors for job growth in this survey.

On the positive side, this 1.47% job growth is above the 1.18% job growth that we had this time last year, and it's been a slow but steady increase in the rate of growth over the last year. But job growth should be picking up when 2014 is a year when the country is adding the most jobs in the last 15 years (aka "THANKS OBAMA!"), and Wisconsin's current rate of growth is still below the 1.9% year-over-year growth that the state was at when Act 10 passed the Wisconsin Legislature in March 2011. In addition, we’re nearly 5,000 jobs below the 39,891 jobs that we had added in the year ending June 2011, which was the last month before Scott Walker’s and WisGOP’s first austerity budget went into law. 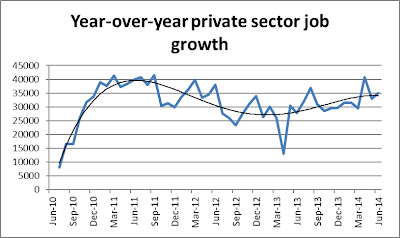 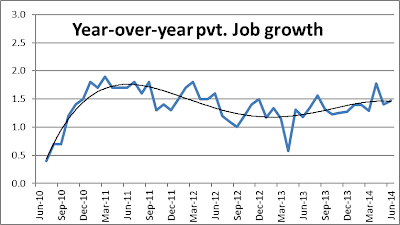 The QCEW report also show Wisconsin to be in the bottom half of U.S. when it comes to private sector wage growth (26th) and in the average weekly private sector wage (34th). That might explain why Gov Walker was warning Senate Republicans yesterday about low revenues that may hamper the state’s budgets over the next 2½ years, even with the jobs numbers in October and November being as strong as they were. By the way, only 2 states in the Midwest had a lower average weekly wage in the private sector than Wisconsin – Indiana (37th) and Iowa (41st), - and yes, both are (right to)work for less states.

And before you start talking up how great things seem in Michigan after they passed (right to) work for less in late 2012, keep in mind that the 93,600 gain they had in private sector jobs is the lowest number of jobs gained in Michigan from June-June in four years. Michigan is still more than 85,000 jobs below where they were in 2006 (!), and is so lacking in tax revenues and services that the state is now planning to ask voters to raise the sales tax by 1% next year and increase the gas tax just to make up for shortfalls in road funding.

So to review from today’s releases.

·Wisconsin had great jobs numbers for October and November, and is finally keeping up with much of the rest of the nation when it comes to the Obama Jobs Recovery for 2014.

·The QCEW shows Wisconsin is still in a massive, underperforming hole when June 2013-June 2014 is considered, and was in last place for private sector job growth from the start of Scott Walker’s tenure through the end of June 2014.

Now we get to see how our major jobs increase from November measures up to the rest of the nation, and if we’re even further in the budget hole due to bad revenues. Both of those sets of information should be out tomorrow.

PS- Chris Walker at Political Heat notes that the QCEW cements Wisconsin in last place for job growth over the 3 years that Scott Walker's budgets have been in effect. It goes into these numbers in more detail if you wish to check it out.
Posted by Jake formerly of the LP at 8:15:00 PM