Kareem and Jon Stewart say it better on cops

Today’s news about a Milwaukee police officer getting off without charges for killing the unarmed Dontre Hamilton in downtown Milwaukee have made an already sad year seem even dimmer. I could say a lot on the recent spate of uprisings against police violence and the right-wing reaction to the sickening murders of two police officers in New York City subject (and did some on Saturday), but others often sum up thoughts better than I can.

One of those is NBA great Kareem Abdul-Jabbar’s piece in Time today, where he gives his usual deep thoughts into an issue that is more complex than the “protestors hate all police” confrontation that our corporate media wants to simplify it down to. It’s also of note that Kareem was raised in New York City, and has a family background that gives him added insight above many others running their mouths today.

The recent brutal murder of two Brooklyn police officers, Rafael Ramos and Wenjian Liu, is a national tragedy that should inspire nationwide mourning. Both my grandfather and father were police officers, so I appreciate what a difficult and dangerous profession law enforcement is. We need to value and celebrate the many officers dedicated to protecting the public and nourishing our justice system. It’s a job most of us don’t have the courage to do.

At the same time, however, we need to understand that their deaths are in no way related to the massive protests against systemic abuses of the justice system as symbolized by the recent deaths—also national tragedies—of Eric Garner, Akai Gurley, and Michael Brown. Ismaaiyl Brinsley, the suicidal killer, wasn’t an impassioned activist expressing political frustration, he was a troubled man who had shot his girlfriend earlier that same day. He even Instagrammed warnings of his violent intentions. None of this is the behavior of a sane man or rational activist. The protests are no more to blame for his actions than The Catcher in the Rye was for the murder of John Lennon or the movie Taxi Driver for the attempted assassination of Ronald Reagan. Crazy has its own twisted logic and it is in no way related to the rational cause-and-effect world the rest of us attempt to create.

Those who are trying to connect the murders of the officers with the thousands of articulate and peaceful protestors across America are being deliberately misleading in a cynical and selfish effort to turn public sentiment against the protestors. This is the same strategy used when trying to lump in the violence and looting with the legitimate protestors, who have disavowed that behavior. They hope to misdirect public attention and emotion in order to stop the protests and the progressive changes that have already resulted. Shaming and blaming is a lot easier than addressing legitimate claims….

In a Dec. 21, 2014 article about the shooting, the Los Angeles Times referred to the New York City protests as “anti-police marches,” which is grossly inaccurate and illustrates the problem of perception the protestors are battling. The marches are meant to raise awareness of double standards, lack of adequate police candidate screening, and insufficient training that have resulted in unnecessary killings. Police are not under attack, institutionalized racism is. Trying to remove sexually abusive priests is not an attack on Catholicism, nor is removing ineffective teachers an attack on education. Bad apples, bad training, and bad officials who blindly protect them, are the enemy. And any institution worth saving should want to eliminate them, too.

This last part sticks with me the most. I’m all for union protections and solidarity with your fellow worker, but there needs to be an understanding that one person doing injury to the profession is doing injury to all in the profession. And these bad cops have made all cops (including the vast majority of them that do their jobs with honor and dignity) into people now viewed with suspicion and mistrust by a sizable amount of the public.

Instead of standing behind the blue line, they need to be speaking out and removing these cancers that cannot handle the responsibilities of the job of being a law enforcement officer, and urging their union not to reflexively support these bad cops. Everyday officers certainly shouldn’t be cool with letting cynical opportunists fan the flames of anger higher with outlandish public statements about how Mayor DeBlasio or President Obama have “blood on their hands.” Those irresponsible (and wrong) statements will only lead to more good cops being put in danger, which I have a hard time believing is something in the best interests of police officers.

Lastly, I’ll leave with an excellent quote given out by another New Yorker, and a rare member of the media who still believes in getting to the heart of a story over providing two sides of spin. Remarkably, the comment was made a couple of weeks prior to this weekend. 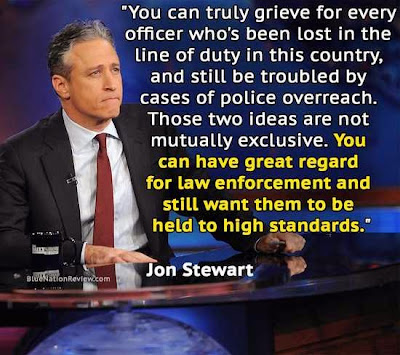 Why are comedians and basketball players the ones saying the most sensible things these days? Where is similar level-headedness, leadership, honesty from most of “legitimate” our media figures? Does money and ratings trump all resemblance of decency and to avoid making sour society even angrier and more divided than it already is? 
Posted by Jake formerly of the LP at 6:30:00 PM