Is Wisconsin lagging in jobs? Or booming? Or what?

Within 2 hours of each other today, we had two bits of reports and analysis that give directly opposite indications of how Wisconsin is faring when it comes to job growth.

On the “bad” side is columnist Bruce Thompson of Urban Milwaukee, who wrote an article titled “Road Map to Economic Failure,” which ripped the job creation approach of Governor Walker and the Wisconsin GOP, using numbers to show just how badly Wisconsin has lagged over the last 5+ years. Thompson’s essay begins as follows.

By this time, it should be evident that Gov. Scott Walker’s job-creating plan has failed. So why does an approach with so little success or supporting evidence for it continue to be followed by Walker and other conservative leaders? 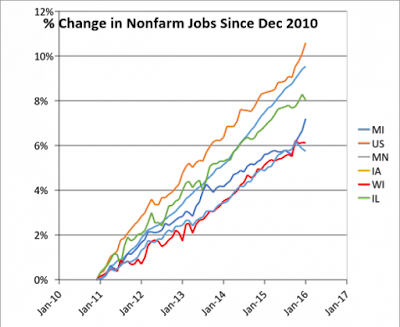 Wisconsin continues to lag behind most of its neighboring states and the nation in job creation. The graph to the right shows percentage growth since the end of 2011 in Wisconsin and states bordering us. While Wisconsin has added jobs since the Great Recession, it has done so at about half the rate promised by candidate Walker in 2010.

Wisconsin’s only competitor for the bottom of the list is Illinois. Illinois has struggled with the worst-funded public employee pension system in the nation. Finding a solution has become nearly impossible because of an impasse between its Republican governor and Democratic legislature. By contrast, Wisconsin’s public pension system has long been among the best-funded in the nation. (a trend that started well before Walker took office, by the way).

And then on the same day, the Walker Administration’s Department of Workforce Development releases a blowout March jobs report, with the following stats.

Place of work data: The state added a statistically significant 13,100 private sector jobs from February 2016 to March 2016 on a preliminary basis, including a significant gain of 4,200 jobs in manufacturing.

Wisconsin also added a significant 47,500 private-sector and 51,200 total non-farm jobs over the year ending in March 2016, the best year-over-year growth since August 2004 in both categories. Additionally, revised February private-sector job counts swung from a gain of 8,000 to a gain of 10,500 private sector jobs, a difference of 2,500.

"Today's report shows that Wisconsin's employment was higher than ever in March, our unemployment rate dropped over the month while the national rate increased, and the state experienced the best 12 months of job growth since 2004," Secretary [Ray] Allen said. "All indicators show that under Governor Walker's leadership, Wisconsin's economy is expanding and adding jobs in 2016.

First of all, that’s classic cherry-picking from Walker’s DWD to say this is “the best 12 months of job growth since 2004.” They’re going on total (alleged) private-sector job gains (47,500), but not the rate of growth, which is 1.92% after this report. Don’t get me wrong, that’s a very good number if it holds, but it’s also not as strong as the 1.94% we had on these same month-to-month reports in April 2014, and other months have been at or near thisrate. And we’ve also seen similarly high year-over-year numbers in other recent years, only to see those gains revised down in the future.

But what gives with these divergent numbers, and why the state jobs report looks so good these days? I took a look inside the March Wisconsin jobs report, and the first item that jumped out at me is the manufacturing number. While some of that 4,200 gain reflects seasonal adjustments (non-seasonal jobs gained were 2,500), February was also revised up by 1,400 manufacturing jobs. That seems like an awful lot of hiring at Wisconsin factories in a month when the U.S. lost 29,000 manufacturing jobs. I literally find that incredible, and I want to see if there are revisions coming over the next few months, as more refined data comes in.

That’s more jobs than were added for the entire 12-month period between Sept 2014 and Sept 2015, according to the Quarterly Census on Employment and Wages (QCEW). Take a look at the Walker jobs gap chart, and look at the right-hand part of the chart, and how the state figures have jumped since the end of 2015. Do we really think things have changed so suddenly and by so much? 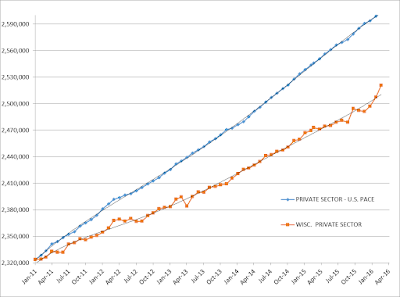 In addition, DWD Secretary Ray Allen tries to claim these alleged job gains are due to “Governor Walker’s leadership.” How can he say that when there were few if any policy changes that went into effect at the start of 2016? The state budget was so screwed up that there wasn’t room for many tax cuts (other than a giveaway for the rich on the AMT, which wouldn’t be realized until tax refunds came back in February and March at the earliest), and most public spending changes started on July 1, with the start of the state fiscal year. You can’t credit (right-to) work-for-less, because that was law in Wisconsin dating back to March 2015, and job creation sucked in the last 9 months of last year.

This huge jobs figure makes me even more antsy to see what the revenue numbers look like for March. You may remember that there was a significant revenue shortfall in February, but that some of that may be due to more tax refunds being sent out in Feb 2016 vs Feb 2015. If that is the case, and if we truly are booming in jobs, then we should see a strong rebound in revenues for March, and not be in danger of having a massive in-year budget deficit spring up.

Likewise, I want to see what the upcoming reports from the “gold standard” QCEW has to say about these alleged job gains. The last QCEW report went through September 2015, and was miserable, with Wisconsin ranking 36th in private sector jobs, and next-to-last in the Midwest. And that’s worth noting because the last QCEW report led to flattening of some of the state’s job growth up through that point, and it’s noteworthy that it doesn’t include the massive jump of 15,400 private sector jobs that was reported by the Wisconsin DWD for October, as well as the alleged gain of over 10,000 jobs a month for this year.

The next QCEW will go through December, and we should see that officially released in early June, with the March 2015-March 2016 report to follow in September. If this job growth is legitimate, it’ll be reflected there. Likewise, if it falls short, there’s going to be some serious ‘splaining for the Walkers and WisGOPs to do ahead of the November elections.

So my best advice is to “stay tuned” when it comes to evaluating how Wisconsin’s economy is really doing in 2016. Especially given that the warm winter we saw through mid-March turned snowy and dreary in the month after, which could skew both seasonally-adjusted jobs figures on a short-term basis (March higher, and April lower).

And lastly, no matter how much the Walker boys try to play a confidence game of “it’s working” and that they claim to be focused in on job growth, Bruce Thompson ends his column by reminding you what this crew is really about when it comes to economic policy. And it tells you why they had such a lousy record in their first five years.

The simplest explanation for the failure of the Wisconsin jobs plan—and others of its ilk—is that it was never really about creating jobs. Rather, the underlying purpose was to further transfer income and resources to very wealthy people.