Washington County, Wisconsin starts on the exurbs of Milwaukee County, and goes up through the heart of the AM radio sheep that the Wisconsin GOP rely on- giving Scott Walker over 75% of the vote in 2012 and 2014, and Bigoted Becky Bradley 72% of the vote in the Supreme Court race of 2016. Both percentages were the most out of any county in Wisconsin for those GOP candidates.

You may wonder what type of place votes in such a way. To get an idea, take a look at the story that came out this week from the biggest city in Washington County. One of the West Bend city fathers was sent to jail...for wanting to be a young girl's daddy.

The city administrator in West Bend has been arrested after police say he tried to entice a 16-year-old for sex. Prosecutors say it started with text messages and only got worse.

According to a criminal complaint, Justice had been sending provocative text messages to a teenage girl for nearly a year -- including offering her money for sex. 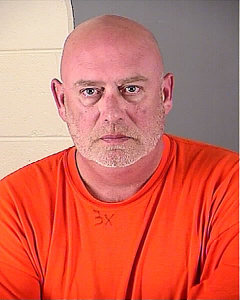 Gotta love the "3x" mark on the orange jail shirt. Typical bully who lived off of "big fish, small pond" syndrome. But wait, it gets better.

The criminal complaint states the girl's mother turned the phone over to police. A detective with the Muskego Police Department posed as the girl to communicate with Justice -- setting up a meeting for sex at a local Dairy Queen.

Police pulled Justice over nearby and found a bottle of Viagra in his car.

A middle-aged bald man hopped up on Viagra who tries to relive his youth by enticing a teenage girl? You couldn't create a better stereotype of a Baggerland shriveldick if you tried. And this guy wasn't just some loser with a dead-end job listening to AM radio so he could blame others for his mediocre life. This guy was the top city official in West Bend, in charge of the city's budget and the hiring and firing of many city department heads.

But having unqualified idiots for public officials in Washington County is hardly unusual. Those same West Bend constituents also the same people that elected Jesse Kremer to the State Legislature, last seen claiming that Wisconsin's jobs problems were due to "entitled college graduates" and workers who won't accept slave wages, and who has introduced a North Carolina-style "bathroom bill" targeting transgendered students. The State Senator for the area is Duey Stroebel, another bald dimwit who was an author of the bill that would have limited the ability of public schools to hold referenda. These referenda are the direct result of cuts in aids to K-12 public schools imposed by Stroebel and Kremer and the rest of the ALEC crew in the Capitol, and then Stroebel decided to impinge on local control in favor of "lower taxes by any means necessary", regardless of how much it damaged the communities involved. Stroebel was also a sponsor of the absurd (and likely illegal) bills that would defund Planned Parenthood and put restrictions on the fake controversy involving illegally-made videos regarding fetal tissue.

And let's not forget who begat all of these goons in present-day West Bend- current Congreessman Glenn Grothman. Grothman is the never-married "family values" fool who lived in his Mom's basement until he carpetbagged his way into a House seat in 2014, and most recently was caught on camera admitting that voter ID was a tactic put in place to help elect Republicans. Among his greatest hits as a legislator included saying that wage gaps existed because men "valued money more than women," and led a charge to get rid of required days off (aka "weekends"), claiming it burdened businesses. Grothman also called pro-union protestors during the 2011 Wisconsin Uprising "slobs" (the bloated, white-haired Grothman is quite the looker, you know), and claimed that already well-off Wisconsinites needed a tax break to send their kids to private school because Grothman said sex education was "radical" and that public school teachers "proselytized a liberal agenda."

This gives you an idea of the type of trash that Washington County and West Bend have signed off on to represent them. Oh, but you in the exurban 262 think that it's the rest of the state that doesn't get it, and you're some kind of low-tax, Christian community that can shut off the 21st Century and be a permanent Pleasantville. Here's a tip for all you in West Baggerland- you're not so virtuous, you're a regressive joke whose mentality is harming the rest of the state, and no one worth a fuck is going to want to live in such a backward-ass place. That's why I don't spend a dime in those parts of the state, and you shouldn't either.
Posted by Jake formerly of the LP at 9:57:00 AM