There have been a few developments regarding highway funding in recent days. So let’s pick up on this week’s proceedings regarding the DOT budget, and see where we stand.

First, let’s go into the Senate Republicans’ plans, courtesy of the Legislative Fiscal Bureau (the DOT plan is on pages 567 to 593 of this PDF). The biggest headline has been the Senate GOP’s plans to throw $350 million onto the state’s credit card to continue roadwork on Southeastern Wisconsin freeways.

Provide $350,000,000 BR in general fund-supported bonding for transportation purposes for the southeast Wisconsin freeway megaprojects program. The estimated debt service on these bonds would be equal to $633,800 GPR in 2017-18 and $7,809,600 GPR in 2018-19. Enumerate the I-94 East-West freeway project as a southeast Wisconsin freeway megaproject. Define this project as the reconstruction of the I-94 freeway in Milwaukee County, from 70th Street to 16th Street, including all interchanges, and including work on local roads as necessary for the completion of this project.

Guess they want to redo and expand I-94, even if Milwaukee social groups and elected representatives in the area don’t want it. But when the greedy oligarchs at the Metro Milwaukee Association of Commerce speak (and gives $362,500 to the Republican Governors’ Association), the GOP follows those requests.

As for the funding part, the Senate GOP would borrow $350 million of General Fund money, meaning that future payments will inevitably take from the available funding for schools, medical care, and other social services. And the extra funding is not offset by much reduction in borrowing from the Transportation Fund side, meaning that there is a total of $712 million in borrowing in the Senate GOP bill, more than Governor Walker’s proposed level of $500 million (which was all Transportation Fund-based).

That’s well above the $200 million that the Assembly GOP wanted for the 2017-19 budget, and leaders of that house said the Senate GOP “didn’t come up with something that we could live with” on transportation.

But with today came news of Governor Walker being OK with getting rid of his stupid $1-a-week income tax cut, and instead using the $200 million in General Fund money that’ll be restored to fund the roads. Assembly GOP leadership quickly leapt to agree with the Governor, saying that the cuts in borrowing that would result from that transfer comes closer to their goals.

We believe this compromise utilizes our current resources wisely by taking all or a significant portion of the proposed income tax cuts from this budget and using the savings to provide funding for our transportation system. In addition, you have offered the possibility of no new transportation bonds, which we appreciate. However, we understand there is a possibility of new bonding based on future federal appropriations and revenue-supported bonding.

That second part of the paragraph requires some more clarification, because I don’t see how $500 million borrowing - $200 million with no tax cut = $0 borrowing. Is the Assembly GOP assuming that all other portions of their prior DOT proposal from Dale (Koo-Koo) Kooyenga are going to go through as well? That plan raised $300 million for the Transportation Fund by making the state's gas tax be susceptible to the 5% sales tax (an increase of about 7 cents a gallon), while reducing the current "base" gas tax by a nickel.

The other option to reduce borrowing to $0 is to cut highway spending by $300 million, which means delays in major projects of 1-2 years. I'd like to see what the formal budget amendment looks like, because Walker is either signing off on a slight gas tax increase (which would put him on the wrong side of DC lobbyist Grover Norquist), or he's causing more delays by striking a "no borrowing" pose.

In addition, while transferring General Fund money is probably better than borrowing it (especially borrowing it from the General Fund, like the Senate GOP wanted to), that doesn’t help anything for the future. It doesn't change our $1 billion structural deficit in the 2019-21 General Fund at all, if you assume $200 million will also be sent over to the Transportation Fund in the next 2-year budget. Combine that with all of the General Fund money that is being proposed to pay for property tax relief in this budget, and it makes me wonder what future programs are going to be cut and which taxes are going to be raised if we get any type of economic or political stagnation over the next 2 years that negates the LFB's January projection of a "Trump Boom" (with a bust getting more likely by the week).

And while media may portray the developments of this week as a method of “shoring up the state’s Transportation Fund,” it looks like it’s merely trading part of the Transportation Fund’s shortfall by the possibility of increasing the one in the General Fund. Yes, it’s better than where we were, and miles better than the Senate GOP’s pile of crap. But it’s nowhere near where we should be or need to be if we’re serious about filling the many (pot)holes in the state budget. And given the mess that is TrumpWorld these days, I'm not thinking Scotty is going to get the help he needs from DC he needs to allow him to stay in GOP BubbleLand while getting the state's road needs take care of. 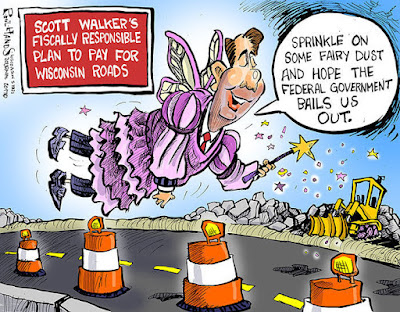