Many parts of the state have been brutalized in the past week by storms, with a lot more rain falling this weekend. Few places got hit worse than the Trempeleau County city of Arcadia, whose residents were literally running for the hills after Wednesday night’s deluge.

The waterlogged city is part of more widespread flooding in Wisconsin and Minnesota that has closed roads and triggered mudslides. The National Weather Service issued a flash flood warning for Winona and Houston counties in Minnesota and parts of Crawford, Vernon, Richland and Juneau counties in Wisconsin. Forecasters say up to seven inches (18 centimeters) of rain fell overnight.

In the Trempealeau County city of Arcadia, several hundred voluntarily evacuated flooded neighborhoods and the downtown area beginning about 2:30 a.m., Mayor Robert Reichwein told The Associated Press. The evacuation included the overnight shift at Ashley Furniture, a major manufacturer in Arcadia, a city of 2,900 about 45 miles (73 kilometers) north of La Crosse. 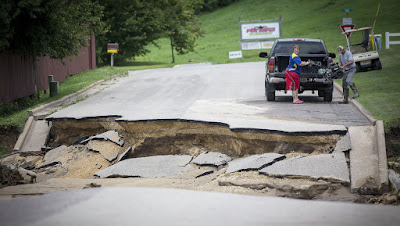 Governor Scott Walker declared a state of emergency in 17 Wisconsin counties in the western half of the state on Friday, and there may be more to come after huge downpours on Friday night.

Buthe words “Ashley Furniture” and the image of rushing waterways made an immediate connection in my mind. And not in a good way. Let’s flash back 3 years to a Scott Walker photo op from 2014.

Walker also said he’s working with the Wisconsin Department of Natural Resources and the U.S. Army Corps of Engineers on a plan to move a creek away from a planned expansion of Ashley’s plant in Arcadia.

“(Those) are things that we can do that are legitimate things that U.S. Army Corps of Engineers and the DNR can work on and help them grow and expand,” Walker said.
Ashley and the DNR came under fire from environmental watchdogs for a 2005 addition there that required filling 13.5 acres of wetlands. Without that expansion, the company said later, most of the company’s 2,000 Arcadia-based jobs would have been moved out of state.

From a table of literature spread out for visitors, [Ashley Fuerniture CEO] Ron Wanek grabbed a flyer decrying federal regulations, including environmental, workplace and health care rules, saying, “This is what’s going to kill industry in the United States.”

Yes, trying to mitigate damage to communities and businesses from an increasing amount of severe floods is absolutely what’s killing industry, Ron. I mean, a company that treats its workers like this is an absolute beacon of corporate responsibility.

OSHA has also placed Ashley Furniture in its Severe Violator Enforcement Program for its failure to fix a number of issues, including 12 repeated safety violations, each of which carries a penalty of up to $70,000.

The agency had previously cited Ashley Furniture in 2014 when another worker lost part of a finger. OSHA opened its investigation after the more recent incident in July, and found that workers had suffered more than 1,000 injuries over a three-and-a-half-year period.

Of those injuries, 100 were caused by similar [woodworking] machinery. Ashley Furniture employs about 4,500 workers at its facility in Arcadia, according to the agency.

Ashley eventually paid a $1.75 million fine to OSHA in June 2016 to settle those allegaitions from the Obama Adminstration’s Department of Labor.

Oh, and did we mention that Ron Wanek and his wife gave Walker maximum donations in 2014 right after the Wisconsin Economic Development Corporation (WEDC) gave Ashley $6 million in incentives for the “expansion” that Walker just happened to show up at 3 months later.

And Scott Walker and Ron Wanek’s furniture company are still finding ways to be associated today, as we found out last month at another “it’s working” photo op in Trempeleau County, celebrating Ashley’s distribution center.

Much of the 500,000-square-foot facility will be located in a floodplain and part of it will sit on the filled-in former bed of Myers Valley Creek. Last year, the city rerouted part of the creek away from the Ashley plant, another business, neighborhoods, and bridges that constricted its flow and contributed to flooding. Ashley Furniture will raise the level of the new distribution center two feet above the 100-year flood level so that it is safe from both Myers Valley Creek and the nearby Trempealeau River, city administrator Bill Chang explained. Ashley donated $300,000 to the over $2 million creek reroute project. A $500,000 state grant and $1.3 million in city debt funded the majority of that project.

Walker praised that flood protection project and said he would support state funding for the city’s next, far bigger flood protection effort: a bid to protect most of the city from flooding on Turton Creek and the Trempealeau River by raising the level of dikes throughout the city. A roughly $1 million study funded by the city and the U.S. Army Corps of Engineers (USACE) is underway to create a plan for that project, and Chang said it should be completed later this fall.

“We’d like to get people out of the floodplain so hopefully they don’t have to buy flood insurance,” (Mayor) Reichwein explained, adding that it would help reduce the cost of living in Arcadia.

Raising those levees will be expensive, and while the USACE will help pay for it, the corps will require some kind of matching funds, Walker said. The match will be more than the city can afford; Arcadia needs a state match, the governor stated. “We’re going to continue to work with you on that,” Walker said.

Isn’t it nice that “small government” Ron Wanek has millions of dollars helping him build this expansion and defraying the costs of locating in such a vulnerable area? And that “low-spending” Scott Walker is working on giving him even more handouts for this project? Oh, but it’s poor minorities that are the “takers” in our society, eh righties?

And hey, look who leapt to his feet to head to Arcadia less than 36 hours after the floods hit!

Ashley Furniture hosted us for a briefing on flood damage to Arcadia - including major damage at their facilities. pic.twitter.com/VGomfw1qYP

Give Scotty this- he always remembers who paid his freight. The rest of you can screw off, but if you pay up like Ron Wanek, you’ll have the Governor ready to help and bail you out any time something bad happens to your business. Even if those damages are predictable and preventable, such as what we’ve seen over the last decade with major floods in Western Wisconsin.