June Wis jobs good, but May revised down. Gap remains

Lost in yesterday’s Nuremburg rally Trump acceptance speech and more crazy storms throughout the state was the release of the June jobs report from Wisconsin. And the topline numbers looked pretty strong, which the Walker Department of Workforce Development made sure to point out.

Place of work data: Based on preliminary data, the state added a statistically significant 49,900 private sector jobs from June 2015 to June 2016, including a one-month gain of 10,900 jobs in June. Other significant changes include monthly and year-over-year increases in manufacturing at 2,300 and 6,600, respectively, a one-month increase in construction by 2,100 jobs, and a 12-month increase in total non-farm jobs at 47,800. Financial activities, and leisure and hospitality also saw significant increases over the month. Total nonfarm jobs grew by 5,300 over the month.

"Over the past year, Wisconsin's private sector created 49,900 jobs, including 10,900 during June 2016, according to the latest monthly estimates," DWD Secretary Ray Allen said. "And while the national unemployment rate increased to 4.9 percent, Wisconsin's rate held at a 15-year low of 4.2 percent during June. As our state economy continues to grow, we need to keep our focus on ensuring Wisconsin employers have access to a robust talent pool to fill their labor market needs."

Well Ray, if you’re trying to keep the talent pool strong, you could convince your boss to invest in quality of life items like education, social policies that accept all people, and protecting our natural scenery and waterways. But I digress, and as Drumpf’s theme song reminded us last night “You Can’t Always Get What You Want.”

However, there’s a fly in the ointment of this report, and it comes with revisions to May’s figures.

That makes it only a 4,600 increase compared to where we thought we were at, which is still good, but slightly below the US pace of growth for that month. And the seasonally-adjusted drop in government employment for June (reflecting larger than normal declines reflecting the end of the school year and other early-Summer factors) means that the overall jobs number barely budged.

So even with this good report, Wisconsin’s total jobs number is still 3,800 below where it was in March, and private sector jobs are only up by 2,800 for the second quarter of 2016. Yes, the strong seasonally-adjusted numbers for January, February and March leave the year-over-year private-sector growth over 2% (good for second in the Midwest, according to the Cap Times’ Todd Milewski’s interactive chart), but take out those 3 months, and it’s not so impressive.

This type of choppiness makes me quite skeptical over whether those strong Q4 and Q1 numbers hold when the next Quarterly Census on Employment and Wages hits in about 6 weeks. That survey will end with the 1st Quarter of 2016, and it’ll tell us if those huge gains actually happened, or if they are set to be benchmarked away in the near future.

And May’s downward revisions mean that even with the nice headlines, the Walker jobs gap has grown a bit from when we last saw it. It now stands at nearly 86,000 private sector jobs, and just under 87,000 overall. 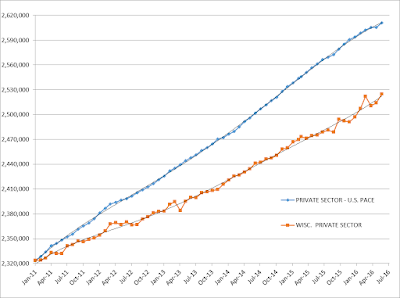 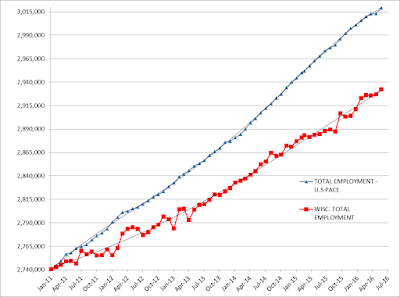 Make no mistake, Wisconsin’s jobs numbers are going in the right direction (“Thanks Obama!”). But the hole of the previous 5 years is still there, and with unemployment allegedly being so low and population growth slowing in the Age of Fitzwalkerstan, I wonder if there’s much more to be gained in the state before things inevitably turn back downward.
Posted by Jake formerly of the LP at 7:10:00 PM