A weekend of Milwaukee Madness

I was in Milwaukee a couple of times during this frenetic weekend to catch some March Madness action. Me and several of my friends decided to return to the Bradley Center Thursday afternoon and Saturday night, and as usual, it was a great time (Saturday night's Iowa State-Purdue game was especially good and intense).

But those games and the festive scene from the out of town fans wasn't the biggest hoops thrill I got out of the weekend.


And Coach Gard's line about how his "water wasn't sweet. BUT THAT WIN SURE WAS!" is a reprise of this classic Gard-o "Dad joke" (around 0:45) from another shocking 2nd round upset that Bucky pulled last year.


Which explains why the dipshit on the right has a juice drink in his hand in this postgame picture from a Milwaukee bar on Saturday afternoon. 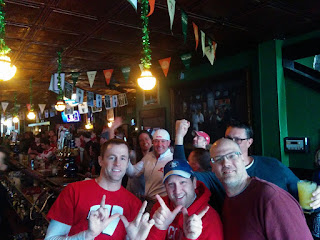 So all of a sudden, things aren't so disappointing with UW hoops are they? And now that these guys are playing with house money, why can't they do some damage in NYC next weekend?

U RAH RAH MUTHAFUCKAS! Now I need to come down from this always-crazy and always-awesome 1st weekend of Madness.

PS- As someone who did quite a bit of driving between Madison and Milwaukee this weekend, the roads are even worse than I recalled it being a couple of weeks back. I know the snow of last week probably is a big reason that things deteriorated further, but it's not a very good look for the many people who traveled into our state's biggest city last weekend. And it probably helps explain why the City and County have put in wheel taxes in recent years, since the state isn't holding up their end of the bargain in either highway maintenance or in giving aids to local communities.