Listen "Liberals"- Step up and tell the truth to rural America

One of the most influential political books to me was Thomas Frank’s What’s the Matter with Kansas? I think I first heard about it while flipping around the radio in the aftermath of Dubya’s re-election in 2004 when a whole lot of us were like “What the fuck is wrong with people that they can’t see through this guy and the destructive garbage he is peddling?”, and Frank’s explanation of why these rural whites continue to screw themselves by voting for these pro-rich, anti-worker Republicans rang very true.

I picked up the book soon after, and constantly found myself nodding my head saying “Yep, know that guy. Yep, I’ve seen that mentality.” Living in a small, post-industrial town in the mid-2000s definitely tuned me into the type of filter these people were seeing things through, and how mushy, half-assed messages from Democrats did not register with them, even if Dem policies were the ones that better fit what they wanted.

Frank is back with another book, and it seems as relevant as ever now that these same rurals voted big-time for a billionaire from Manhattan who has gold-plated toilets. 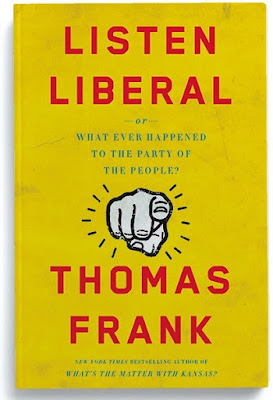 He is heading to Madison on Wednesday to have a reading and book signing, and the Capital Times’ Paul Fanlund interviewed the author ahead of the visit. Frank points to the tactics and “divide and conquer” mentality of Scott Walker as a perfect example of the tactics that Republicans will pull in order to grab and grow power, and how Democrats still don’t seem to know how to respond to it.

“Scott Walker is a textbook case of the kind of conservative that I wrote about in ‘What’s the Matter with Kansas?’ Now, ‘Listen Liberal’ is the other side of the coin. The question is why can’t the Democratic Party beat these guys? Why does the country keep moving farther and farther to the right?”

If Wisconsin reflects themes in those two books, it also shows up in another of his books, he said, the one titled “The Wrecking Crew: How Conservatives Destroyed Government, Enriched Themselves and Beggared the Nation.”

He pointed to Walker’s attack on unions: “That’s very typical of the right. They play the game much better than the Democrats do. One of the things that you find them doing again and again and again in different places is they figure out what props up the local Democratic Party and then they destroy it.

“They either destroy the institution or they destroy the method by which it funds the Democratic Party. There’s a slogan they used to have back in the ’70s — ‘Defund the Left.’ And that’s what Scott Walker is doing. They’re doing this nationally as well. They’ve been going after organized labor for years because unions donate to the Democratic Party.”

Far too many Democratic Party leaders think that 2010s politics is a debating society where being nice and “going high when they go low” will impress enough voters (often mouthed by comfortable elites lite Paul Fanlund) that we can slip by without saying much about economic issues. How’s that strategy working out for us?

Frank goes on to note that too many national and state Democrats have “lost their ability to speak to a huge part of the population in a state like yours,” and that they need to return to populist, bread-and-butter messages focused on the economy and the power of big money. Whether we like it or not, many people vote based on their gut, and they don’t want to hear a message of “you have to get better skills and hope they’ll pay you more.” They want to hear their lives will get better, and they want someone to blame for why their wages and lives have stagnant.

Which gets back to what Frank’s book is titled. “LISTEN, LIBERAL!” Listen to why these people are angry in all of these newspaper and magazine articles that we’ve seen in rural Wisconsin since the elections. They don’t see politicians trying to fix the real economic and social problems in their lives, so they default to politicians that are at least relaying their anger at “the system” and “those people”, and Republicans are craven enough to play to those lesser angels.

One of the people Thomas Frank says is showing the way on how Democrats should act if they want to win with blue-collar voters is someone who far too many DNC and DPW hacks knocked down for “not being a real Democrat”- Bernie Sanders. Here’s a great example from this week, where Bernie says “Hey working-class America- Donald Trump lied to you.” (Bernie comes on around 2:15)


I'll remind you that Bernie won 71 of 72 counties in Wisconsin just under a year ago, and it’s because he connected to everyday people and their problems, and offered solutions to them in a way that people can understand. With the implosion of Trump/Ryancare in DC, now would be a perfect time for Democrats to jump in and say how they will IMPROVE Obamacare, and stop greedy insurance and drug companies from abusing their power over vulnerable Americans.

Speaking of craven, in between hoops, I had on MSNBC Thursday night as they discussed the debacle going on with Republicans in DC regarding the health care bill, and none other than Wisconsin’s own Charlie(tan) Sykes was on (I can’t find the link). But what was striking was that Charlie(tan) admitted that most mouthbreathing right-wing radio listeners GOP voters don’t care about high-minded conservative theories like “returning power to the states over Medicaid.”

And Sykes is correct- the average angry blue-collar voter wants to have the stability of affordable health care, and to be able to make a decent wage at work, and to not have to change their lives in order to have a decent existence. They can’t understand why hard work and playing by the rules isn’t rewarded much these days, while others that don’t follow those rules seem to get away with more. Whether you like that mentality or not, it is there, and for Dems to win those voters (and win many states like Wisconsin in the process) it requires honest, straight talk that redirects rightful blue-collar anger to the people who caused it- greedy corporates and the politicians that have done their bidding.

I did see one release from Wisconsin Democrats that indicated they might be catching on. It related to the Legislative Fiscal Bureau’s release this week which showed that voucher schools get more state funding per student than K-12 public schools. When voucher lobbyists and their Republican puppets tried to claim that property taxes meant that public schools were more expensive (a questionable assertion in itself), Dem legislators shot back

“What’s the difference between $7700-$8400 handed to the voucher industry and an average of $6700 for public school students?,” Rep. Gordon Hintz (D-Oshkosh)asked. “The voucher industry has made their answer clear this week: property taxes.” …

“Wisconsin taxpayers have been on the hook since the GOP started hijacking state aid intended for public school students and handing it to the special interest voucher lobbyists,” saidSen. Jon Erpenbach (D-Middleton).“Republicans have decided to leave it up to responsible school boards across the state to fill the hole the GOP created by handing the voucher organizationsmore per student.”

One of the chairs of the Legislature’s budget-writing committee decried the revelation that the GOP was taking funding out of public schools and handing it to voucher schools by complaining that state funding detailswere “... completely neglecting the funding that comes from our state’s property taxes.”

“It IS time to stop neglecting property taxpayers and start living up to our responsibilities as state legislators,” said Rep. Sondy Pope (D-Mount Horeb).“The simple fact is that we have a constitutional responsibility in the statehouse for state funding of public education, and my GOP colleagues have chosen to hand voucher operators muchmore per student than public school students, and the voucher industry says it’s up to property taxpayers to fill the gap.

THAT is the type of straight-talk messaging that Dems in Wisconsin need to be giving if they ever want to be back in control of the state Legislature. Sure, gerrymandering is part of the problem, but gerrymandering doesn’t explain all of those Obama-Trump counties in rural Wisconsin. Maybe a few more Dems at the Capitol can make their way down to Room of One’s Own on Wednesday to hear from Thomas Frank and see how it’s done. 
Posted by Jake formerly of the LP at 10:01:00 AM