The Kenosha County paradox- more jobs, but not more people

Looks like we have a new way to jump-start our state's economy. YUMMY GUMMIES! 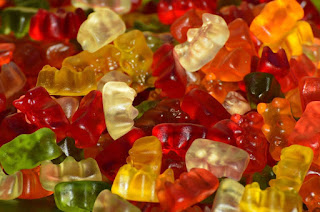 Walker hailed the move by Haribo coupled with the recent opening of a cardboard box factory employing 120 workers in Beloit, a Mills Fleet Farm distribution center employing 325 workers in Chippewa Falls and Thursday's news that the state's unemployment rate dropped to 3.7 percent in February as signs the state's economy is getting sweeter….

Haribo plans to open the 500,000 square-foot facility by 2020, the company's 100th anniversary, in a new office park the village of Pleasant Prairie is developing, Wisconsin Economic Development Corp. CEO Mark Hogan said. The village purchased the 400-acre site for $37.5 million.

Hogan said the state economic development agency has put together an incentive package to help bring the company to the state, but the details won't be released until after the WEDC board approves the deal.

On the face, it appears to be another coup for the apparently booming Kenosha County, which had the highest rate of job growth in the state in the latest “Gold Standard” Quarterly Census of Employment and Wages, and the second-highest addition of jobs overall (behind Dane County), with more than 3,200 new jobs over the 12 months measured.

But another item that came out today that didn’t get as much play from the media was the Census Bureau’s new 2016 population estimates for every county in America (feel free to click here to play around with the numbers). And what’s odd about all of these Kenosha-area job announcements and new factories is that they haven’t translated to population growth.

In fact, Kenosha has consistently been losing people at one of the highest rates in Wisconsin in the last 6 years. Milwaukee is far and away the biggest loser of people to other parts of the state and country (I’ll get into that in the near future), but since the 2010 Census, Kenosha County has lost nearly 2,700 people to domestic migration, the 3rd most of the state’s 72 counties. 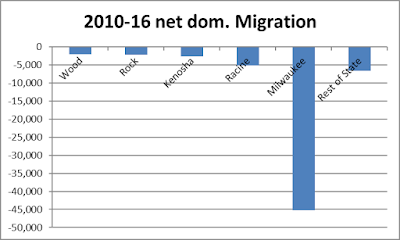 By the way, much of Paul Ryan’s district is shown in this graph. How’s that experience been working out for ya?

The same concept holds for last year. In those new numbers from the Census Bureau, Kenosha County lost 659 people last year to domestic migration, even more than Racine this time. 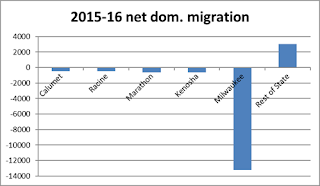 I’m struggling to put these two concepts together, where Kenosha County is allegedly adding all these jobs, but is losing hundreds of people a year. It isn’t all immigration, because that’s only +757 since 2010. Is it people from Illinois who are taking the jobs near the state line (and paying taxes to Illinois as a result)? Are these new warehouse jobs not making up for better jobs that have been lost in this time period, and/or the new factories don’t require as many workers due to automation?

It’s nice that we’ll be making gummy bears in Pleasant Prairie, but notice that this factory won’t even start production until 2020, and these “projected” jobs always seem to come up short if/when the new facility actually does open (naturally, Walker plans to be re-elected and/or promoted to DC at that point, so he won’t be held accountable for this). So I’ll wait and see how much we’re going to shell out of our already deficit-ridden budget before I break out the gummy bears in celebration of HARIBO coming to our state.

And the sizable amount of people moving out the state over the last 6 years makes Gov Walker’s and WMC’s proclamations of “3.7% unemployment, things are great!” ring very hollow. It is quite obvious that, much like our fellow Koch lab rats in Kansas, Wisconsin’s low unemployment rate is more because of a lack of people wanting to stay here than it is a huge boom in jobs. If things were truly going great here, we would see manufacturing wages be higher, instead of being the lowest in Midwest.

Much like with the “dark stores” question, I wonder how the remaining Kenosha area residents are handling the many tax incentives that keep getting handed out like gummy bears to companies to pretend that we are “open for business.” Those people are paying the property taxes that the distribution centers aren’t, and will pay for the Village of Pleasant Prairie’s investments of land and infrastructure that will go into the new HARIBO factory. Maybe that high price of “job incentives” helps to explain the paradox in Wisconsin’s most southeastern county- where lots of new jobs and development isn’t translating into people coming to live in Kenosha County.
Posted by Jake formerly of the LP at 7:51:00 PM