I see Governor Unintimidated backed down and finally allowed special elections in 2 districts in the State Legislature today. The elections will be held on June 12, 5 1/2 months after they first came open, but Scott Walker couldn't let the declaration go by without unleashing a string of Tweets whining about how he was forced to do his taxpayer-funded job.

Obama Attorney General Eric Holder and his Washington, D.C.-based special interest group are behind the legal push to force Wisconsin taxpayers to pay for special elections for seats that will be filled in a few months in the normal elections.

Holder’s group wants to win elections for governor with the hopes that they can use redistricting to permanently change the makeup of the U.S. House of Representatives and put Nancy Pelosi back in charge as speaker.

Click on those tweets, and you will see a sizable reply-to-retweet ratio. Want to know if someone unpopular has said something really stupid? It looks like that.

I understand that the favorite holiday of Scott Walker and other Wisconsin Republicans is tomorrow, because just like what many Christians will do on Good Friday, these people celebrate being persecuted. The whining and failure to take responsibility for being a crooked a-hole may be the thing I hate the most about Republicans in the Age of Fitzwalkerstan (well, that and the authoritarianism and failing policies that are turning the formerly great state of Wisconsin into a regressive craphole that can't attract talent). But then again, this has been a Republican tradition for at least 50 years. 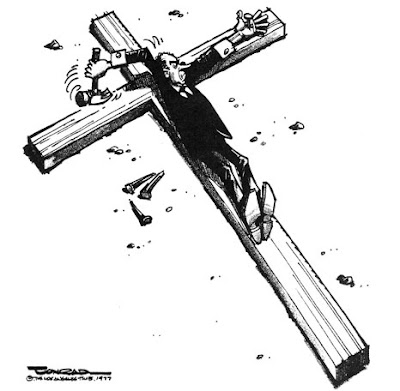 I couldn't help but respond on my lunch hour to the massive pile of cynical bullshit Scotty was trying to sell.

YOU delayed elections and caused extra elections and costs.
YOU wasted our tax dollars in court.
YOU aren't man enough to admit your scheme was a giant failure.
STOP WHINING, Gov Dropout.

And vote Dallet on April 3 to keep this boy in check. #LetWiVote #wiunion #Resist #ALEC https://t.co/b3YlhDH1oW

This is all on Scott Walker and the Wisconsin GOP for pulling this fascist routine. It's especially absurd given that Walker caused these vacancies when he hired the 2 legislators for big-money jobs in late December. He knew better than anyone else that these seats were becoming vacant, and he could have done the fiscally responsible thing by matching it up with the Spring elections that are taking place next Tuesday, April 3. HE CHOSE NOT TO.

And now Walker's campaign and likely the already-troubled Supreme Court bid of Michael Screnock has taken a notable hit, especially in the two usually-Republican leaning districts that Scotty screwed over. And it couldn't happen to a better group of scumbuckets.