Some Trump/Russia links, snooping is leading back to Wisconsin

With recent developments in the Trump/Russia investigation, one organization that has come up a lot recently is Cambridge Analytica, a data firm who has been accused of using profiles of tens of millions of Facebook users without their consent, and then bombarding them with propaganda ahead of American elections. And a few stories this week connected Cambridge's operations right back to elections here in Wisconsin.

Mary Spicuzza and Dan Bice put some of the pieces together in a story this week in the Milwaukee Journal_Sentinel. The Wisconsin connections start with GOP operative Mark Block, who not only was fined and banned from Wisconsin politics for illegally coordinating with a right-wing Supreme Court candidate 21 years ago, but he also headed up the Kochs’ American for Prosperity Astroturf group during Scott Walker’s and the Wisconsin GOP’s rise to power in 2010.

Block then left that job to become Herman Cain’s campaign manager during Cain’s 2012 presidential run, and was accused of using $40,000 from a Koch “non-profit” as an in-kind donation to the Cain campaign (this theme will come up again).

After the Cain campaign lost in the 2012 primaries, Block was on to his next venture, and that’s where a recent Mother Jones article notes a 2013 meeting between Block, now-suspended Cambridge Analytica CEO Alexander Nix, billionaire right-wing donors Robert and Rebekah Mercer,and Steve Bannon. Mother Jones goes on to say that the Mercers soon invested $15 million into what became Cambridge Analytica.

And sure enough, Spicuzza and Bice caught on to reporting from the Guardian which showed that Cambridge was getting paid very close to home.

Cambridge Analytica's mailing address in some FEC filings is a New Berlin, WI P.O. Box linked to Mark Block, a political operative who was Herman Cain's chief of staff. pic.twitter.com/0BeuyglEjr

This is sketchy enough, especially given Block’s direct ties to the Kochs and the way those guys have become a major puppetmaster of state government here. But then Spicuzza and Bice bring up even more intriguing connections at end of the article.

Matt Oczkowski, who worked on Walker's 2014 re-election bid and his 2016 presidential run, became head of product of Cambridge Analytica, working out of San Antonio….

And former Walker campaign staffer Molly Schweickert is now serving as vice president of global media for the company.

It would defy belief that fellow Wisconsinite Reince (“the Wisconsin GOP had complete unity with the Koch groups in Wisconsin”) Priebus wouldn’t have been tuned in to what Block and Walker’s campaign was up to since 2012. Which makes me wonder if the vaunted “GOP turnout operation in Wisconsin” is actually a Cambridge Analytica-style psyops and misinformation campaign on unsuspecting voters, mixed in with race and hate-baiting from GOP spokespersons on AM radio. 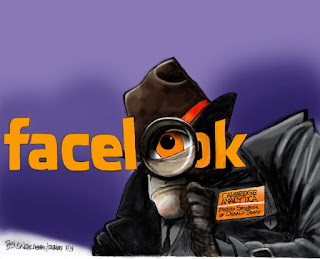 Related to that psy-ops work by Cambridge, Citizens for Responsibility and Ethics in Washington (CREW) just filed a complaint against John Bolton’s SuperPAC alleging that foreign workers from Cambridge Analytica were illegally working as de facto GOP campaign staffers in 2014 and other elections, using those .

Foreign nationals, including Christopher Wylie, were involved in providing strategic advice to the John Bolton Super PAC regarding the independent expenditures the super PAC made to support the election of several federal candidates, including Thom Tillis in North Carolina. “Chris Wylie, a 28-year-old Canadian who ran messaging for Cambridge out of its London office in 2014, said he worked on all the company’s U.S. political campaigns in 2014, ‘and stopped at most of them, like Thom Tillis’s campaign.’ Tillis ran for and won a U.S. Senate seat in North Carolina in 2014.” “Wylie said that many foreign nationals worked on the campaigns, and many were embedded in the campaigns around the U.S. ‘It was not just me,’ he said. ‘Like 20 other people were. We had Canadians, British, Eastern Europeans, Lithuanians, Germans, Romanians, Greeks.’” Most importantly, Wylie said that foreign nationals were participating in the decisions that U.S. political committees, including the John Bolton Super PAC, made with regard to how the political committees made campaign expenditures. “‘We weren’t just working on messaging. We were instructing campaigns on which messages go where and to who.’” “Wylie said that Bannon ... was deeply involved in [CA’s] strategy and approved spending nearly $1 million to acquire data, including Facebook profiles, in 2014. ‘We had to get Bannon to approve everything at this point. Bannon was Alexander Nix’s boss,’ said Wylie.”

Also note that Bolton’s SuperPAC is currently planning to pay up to $1 million to prop up the campaign of empty suit Kevin Nicholson for the US Senate in Wisconsin ….by promoting Nicholson’s “patriotism.”

If these allegations from CREW are true, and if it you put it together with Walker campaigners that have ties to Cambridge Analytica, it sure seems possible that WisGOP was illegally working with organizations like Cambridge that are supposed to be operating independently from candidates and parties in both 2014 and 2016. And if Walker and WisGOP were not reporting those expenses, that’s a major campaign law violation.

The Cambridge connections make the $1.1 million that Ukrainian oligarch and Putin buddy Len Blavatnik gave to Walker’s epic fail of a presidential campaign interesting, doesn’t it? It also makes me wonder what favors may have been returned to these outside groups from the Governor, Legislature, and other WisGOPs in return for all of this “research”?

There are so many strands in the Trump/Russia story that it’s often hard to keep things clear in your mind. But the money train is always a good track to ride on, and it seems like an unusual amount of that cash and the related collusion leads back to Wisconsin. Let’s see if others in our state media start following the trail, and ask why Scott Walker and the Wisconsin GOP keep getting connected with this type of sketchiness.