You may have heard this week that our Fair Governor got slapped down by a judge he appointed for failing to call special elections in two vacant seats in the Wisconsin Legislature. But what you may not have heard (or recalled), is the ridiculous argument that Scott Walker and Attorney General Brad Schimel tried to put in front of Dane County's Josann Reynolds.


The law states elections must be called if they occur before the second Tuesday in May in an election year. Walker argued that only covers vacancies that happen after Jan. 1 of the same year as the election, and since these happened on Dec. 29, 2017, he’s under no requirement to act. Plaintiffs contend the requirement applies to vacancies at any point prior to the second Tuesday of May in the election year, not just the same year as the election.

The judge agreed. Reynolds said Walker’s interpretation of the law “flies in the face of reason,” ‘’violates basic rules of grammar” and would lead to an “absurd result.” She said voters would clearly suffer harm if the seats were vacant all year, noting that Walker could be forced to call a special election if the U.S. Supreme Court orders Wisconsin lawmakers to redraw political boundary maps in a redistricting case awaiting a ruling.

Seems straightforward enough, but Judge Reynolds made the error of not ordering the elections herself, and for some reason trusting these scumbuckets to do the right thing now that the courts had spoken.

To little surprise to those of us who have paid an ounce of attention in this state for the last 7 1/2 years, Walker and WisGOP aren't going to do the right thing. Instead, they want to change the law so that they can mess with the open seats as they see fit.

Fitzgerald said he wants to "clean up the statutes" before the special elections would be held. The Senate could come in next month to take up the legislation, he said. He did not offer specifics about what the proposal would look like, but said special election timelines should align with the existing elections that are already on the calendar.

"We are very concerned where this whole thing is headed," he said.

In a joint statement issued Friday afternoon, Fitzgerald and Assembly Speaker Robin Vos, R-Rochester, said they will call an extraordinary session to take up the legislation.

Walker said he will sign the legislation once passed by the Legislature. 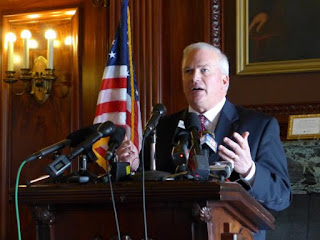 First of all, let me introduce these a-holes to a concept called ex post facto. It's in Article I, Section 9 of the US Constitution (you know, that document that Republicans claim they're all about following and never changing because they don't believe in "activism"), and is defined as thus.

Parts 1 and 4 sure seem to apply- you don't get to change the laws on special elections retroactively and then say "We're all good" just because you failed to follow the rules the first time.

And also, these are the same guys who were jamming through dozens of bills in an all-night session just to get out of town. Now these guys don't need to go on a 9 1/2 month paid vacation to take care of one more shot at rigging democracy in Wisconsin? And it kinda blows up Walker's whole spin of "Why are we having elections if the legislature is adjourning?", because apparently THEY'RE NOT ADJOURNING.

Just to review, here's the law that goes over the situation that occurred after those two legislators resigned on December 29, 2017. And I am going to emphasize the key parts that should be applying here.

December 29 was 54 days prior to the Feb 20 Spring primary, and 96 days before the April 3 Spring election, plenty of time for Walker have the election held when Rep. Kevin Ripp and Sen. Frank Lassee resigned to cash in. And IT WOULDN'T HAVE COST AN EXTRA DIME TO THOSE COMMUNITIES, because there already was going to be an election for the Supreme Court in this state.

All Scott Walker and the complicit WisGOP Legislature would have had to do is FOLLOW THE FUCKING LAW, and there wouldn't have been any problems. Instead, they decided to play games, spend taxpayer dollars trying to defend the indefensible, and then (like all abusers do) turn around and blame the people who dare to issue consequences to the Rethugs for not following the law.

If this mentality sounds familiar, it should. This is the exact type of garbage these people tried to pull during the recall elections of 2011 and 2012, when Scott Fitzgerald and Scott Walker encouraged GOP hacks to enter recall races as Democrats to force primaries and delay the elections for 4 more weeks. After the recalls, Robbin' Vos had the nerve to complain about the cost of the extra elections that were caused by the "divide and conquer" act by Scott Walker and the ALEC-GOPs .

And as a Dem candidate for Governor noted, it sure shows you what these GOP "public servants" truly find important.

So they will delay closing the dark store loophole that has bipartisan support and will benefit property taxpayers and local municipalities, but they will hold an extraordinary session to make sure the political system is rigged in their favor? https://t.co/pbQJ9gcT6s

These people truly do not believe in a concept of "consent of the governed", and clearly do not trust their own ideas to win out in a fair fight. They cannot be allowed to pull this shit any more.

Hey WisGOPS, you better pray that the only price you pay is at the ballot box for this disgusting abuse of power, and don't end up in the clink for contempt of court. You'd better let democracy take its course, and accept your losses like men. Because if you don't allow the democracy option to work out, the other option won't allow you to pull wingnut welfare paychecks after they're out of office. Do you really want that to happen?
Posted by Jake formerly of the LP at 5:37:00 PM