Is this good news? Or just “news that is less bad”?

The federal deficit will surpass $1 trillion in 2022, two years later than previously projected, according to a new report by the Congressional Budget Office.

Previous CBO outlooks projected that the deficit would surpass $1 trillion by 2020, but a reduction in emergency spending on disasters such as hurricanes in 2018 lowered the outlook. The central factors driving growing deficits, however, showed no signs of slowing.

Those figures are from the CBO’s Budget and Economic Outlook: 2019 to 2029, which came out this morning. In it, the CBO says deficits will still rise in future years, but at a slower pace than they had projected in December in a prior publication.

For 2019, the CBO says revenues will increase by $25 billion compared to the projections they previously had, and spending will be $51 billion less than last month’s projections. These are relative drops in the bucket when you’re talking total spending that’s projected to be more than $4.4 trillion for this fiscal year, but $897 billion is still less than $973 billion, so I guess we’ll take it. 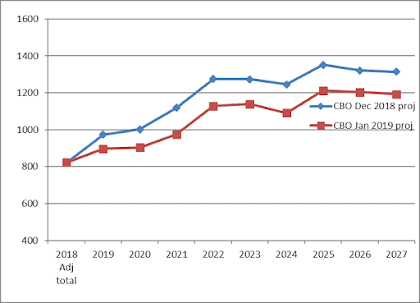 The CBO says that their economic projections in the Budget and Economic Outlook do not include the effect of the recent government shutdown . They talked about that in a separate document, where the CBO said the shutdown did have a small impact on the economy, especially at the end of 2018.

As a result of reduced economic activity, CBO estimates, real (that is, inflation-adjusted) gross domestic product (GDP) in the fourth quarter of 2018 was reduced by $3 billion (in 2019 dollars) in relation to what it would have been otherwise. (Such references are in calendar years or quarters unless this report specifies otherwise.) In the first quarter of 2019, the level of real GDP is estimated to be $8 billion lower than it would have been—an effect reflecting both the five-week partial shutdown and the resumption in economic activity once funding resumed….

In subsequent quarters, GDP will be temporarily higher than it would have been in the absence of a shutdown. Although most of the real GDP lost during the fourth quarter of 2018 and the first quarter of 2019 will eventually be recovered, CBO estimates that about $3 billion will not be. That amount equals 0.02 percent of projected annual GDP in 2019. In other words, the level of GDP for the full calendar year is expected to be 0.02 percent smaller than it would have been otherwise.

For the deficit side, the CBO basically assumed in the Budget and Economic Outlook that total spending for the 2019 Fiscal Year would be unaffected by the shutdown, which seems to contradict what the more recent report said.

CBO’s projections of discretionary spending were made in mid-December 2018, reflecting laws that were then in place. At that time, only five of the 12 regular annual appropriation acts for 2019 (and one supplemental appropriation for disaster relief) had been enacted. Many federal agencies were operating under a continuing resolution (the Continuing Appropriations Act, 2019, which had been extended through December 21, 2018, by P.L. 115-298), which, with a few exceptions, continued the appropriations and authorities contained in appropriation acts for 2018.20 Funding for those agencies subsequently lapsed when that resolution expired (which resulted in the 35-day shutdown we just had). For agencies affected by that lapse, CBO’s current baseline projections incorporate the amount of fiscal year 2019 funding that was provided before P.L. 115-298 expired on December 22, 2018, annualized (that is, as if that amount of funding had been provided for the entirety of the fiscal year).

As mentioned above, a reason spending is constrained in these newer projections is that the CBO figures that last year’s severe weather events won’t be repeated in 2019. That seems like a pretty risky assumption, given what seems to happen increasingly each year with severe weather events causing more damage in high-cost areas of the country (the CBO projects that this and other “nondefense discretionary spending” will go down by $104 billion).

If those disasters do happen, or if other spending needs crop up, or if we actually do get an infrastructure bill done in the Trump Era, then the deficit goes back toward the $973 billion that was originally projected for this year.

But wasn’t the cost worth it, and didn’t we get a big boost in our economy as a result of the tax cuts, causing a major jump in the economy? The National Association of Business Economics (NABE) says the effect was minor at best, at least from the business side,

“A large majority of respondents, 84 percent, indicate that one year after its passage, the corporate tax reform has not caused their firms to change hiring or investment plans,” said NABE President Kevin Swift.

The lower tax rates, however, had an impact in the goods producing sector, with 50 percent of respondents from that sector reporting increased investments at their companies, and 20 percent saying they redirected hiring and investments to the United States from abroad.

But as usually happens with stimulus, first it giveth, then it taketh away.

The NABE survey also suggested a further slowdown in business spending after moderating sharply in the third quarter of 2018. The survey’s measure of capital spending fell in January to its lowest level since July 2017. Expectations for capital spending for the next three months also weakened.

If true, that would seem to put into question the CBO’s expectations of revenue growth of 5.6% for this fiscal year.

But while the CBO does anticipate growth slowing, their economic projections (found around Page 56 of their report) only indicate slight differences from what they were predicting back in August. The CBO does have slower growth for real GDP (2.3% next year vs 2.4% last August) and corporate profits (8.9% vs 9.6% in Aug), and slightly higher unemployment (3.5% vs 3.4% in Aug). But the differences are very small, despite the volatility in the stock market and the federal government since then.

On the flip side, what seems to have helped to reduce the deficit projections is that long-term interest rates aren’t supposed to be as high next year (10-year note projected at 3.4% vs 3.6% in Aug), and inflation also seems to be slightly lower, which would reduce benefit costs and general costs of government services.

But despite a slightly better picture than what we had last year, the federal budget is still in a significant hole due to the GOP’s Tax Scam, as shown by this comparison, which shows the projected deficit for 2019 has grown by more than $200 billion since the Tax Scam was passed into law. 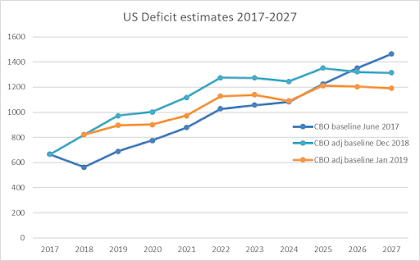 Now that the one-time bump in growth is going away, 2019 and future years will be left to deal with the fallout of a slower economy, increased deficits and increased inequality that have resulted. And that’s not going to be fun.
Posted by Jake formerly of the LP at 5:03:00 PM