Too much cheese is giving farmers not enough cheese. And shutdown makes it worse.

We've got a serious problem that's hitting a lot of Wisconsinites, and it's only gotten worse since Stephen Colbert reported about the issue nearly 3 years ago.

That's right, cheese is piling up everywhere and the Wisconsin Public Radio notes it's only gotten worse since then.


While Americans consumed 37 billion pounds of cheese in 2017, the nation’s surplus of cheese reached 1.4 billion pounds late last year, a record high since the United States Department of Agriculture has been keeping track.

Measuring in at 900,000 cubic yards, that mountain of cheese is equivalent in size to the U.S. Capitol building…
So, how did it happen? In short, the oversupply of milk is driving it.

The U.S. has increased milk production by 13 percent since 2008, yet at the same time the days of drinking milk with every meal are long gone as more Americans are opting out or replacing it with nut milk alternatives. In the 1970s, Americans drank about 30 gallons of milk a year, today, it’s closer to 18 gallons.

To pick up the slack of declining milk consumption, excess milk is turned into cheese because of its longer shelf life. While cheese consumption hasn't been able to break even with production, cheese consumption in the U.S. has remained strong — even increasing marginally each year.

Given the circumstances, we probably need to go further than the last Governor’s method of helping family dairy farms, which as basically this.


Overproduction is the main problem here, particularly among mega-farms who have a better chance of affording to crank out more product at a lower price due to their economies of scale. It’s this economic reality that makes it sensible for Tony Evers to limit the Manufacturing and Agriculture tax credit to the first $300,000 of income, as it’s the small farmer that is struggling the most in this era of milk and cheese surpluses, not the CAFOs.

We may also need to do more to stabilize these farms, and/or reduce the amount of product on the market. This report from earlier this month indicated that Wisconsin farmer groups want to see a national program to limit dairy production Both the Wisconsin Farmers Union and the Wisconsin Farm Bureau Federation have signed off on the idea, which proponents say is similar to a Canadian program that is intended to raise milk prices.

"We are willing to consider a dairy supply management system," said Joe Bragger, a Buffalo County dairy farmer who sits on the board of directors of the state’s Farm Bureau Federation. "The organization historically has always been very strong free market supporters, but I believe the delegates wanted all options on the table."

But Bragger said he doesn’t believe Wisconsin farmers want to copy Canada or any other country that manages agricultural supply and demand chains.

"Make it unique to the U.S. and maybe take some responsibility in managing that supply," he said. "A lot of discussion will have to go on, but the door is now possibly open."

Mark Stevenson, a dairy industry expert, said supply management programs like those in place in Canada and other countries can be effective.

"If you restrict the amount of milk that gets to the marketplace, you can keep prices much higher, but if you do that, there has to be a lot of restrictions in place," said Stevenson, director of Dairy Policy Analysis at the University of Wisconsin-Madison College of Agriculture and Life Sciences. "The state of Wisconsin, for example, couldn’t decide to do that because we would be inundated with milk from outside the state. It has to be done at the national level." 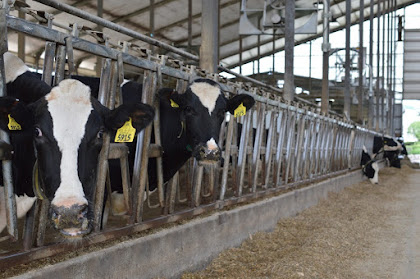 Hey, could you back off a little?
Speaking of the national level, another form of help isn't coming for many already-strapped farmers are being kept from needed help due to the federal government shutdown. Tim McGreevy is the CEO of the USA Dry Pea and Lentil Council, and notes that farmers have already lost revenue from lower prices, and now are in danger of not getting insurance payments that were intended to make up the difference.

Chinese tariffs on U.S. agriculture, imposed in response to U.S. duties on goods from China, have caused crop prices to drop. For pulse crops — dry beans, dry peas, chickpeas and lentils — that means a cut of 30 percent to 60 percent, [McGreevy] told CNBC on Monday.

However, last spring about 60 percent of pulse farmers took out what's called revenue crop insurance, which protects against price drops like this, he said on " The Exchange ."

"We expect to have a fairly significant revenue insurance payment, but we have to have the harvest prices announced," he said.

Those are supposed to be announced on Friday [January 15], resulting in payouts by the end of January. However, the analysts who analyze the data are on furlough. That means a delay for farmers waiting for much-needed funds.

Yep, the subsidy payments that the Trump Administration claimed would help farmers through this time of tariffs are one of many casualties of the Trump-supported shutdown in DC. Note this story in the Washington Post from a couple of weeks ago.

U.S. Agriculture Secretary Sonny Perdue said Tuesday that the government would extend the application deadline for support payments beyond the Jan. 15 deadline due to the shutdown, while urging Congress to pass a bill Trump would sign to “end the lapse in funding so that we may again provide full services to our farmers and ranchers.”…

About $5.2 billion in checks already have gone out since the program began, including 360,000 payments collectively worth $3 billion since the government shut down, according to Tim Murtaugh, a USDA spokesman. But farmers who did not certify their crop production before the shutdown began cannot do so until the government is running again because the offices of the Farm Service Agency, which is administering the bailout, are closed.

“A lot of these farmers had late harvests, so being able to submit that was a real challenge,” said Mike Steenhoek, executive director of the Soy Transportation Coalition, which works with soybean farmers. “There’s a lot of worry.”

The bailout checks have “made a significant difference” for farmers facing not only the trade war but also lower commodity prices after a bumper year for soybean crops, said Arlan Suderman, chief commodities economist at INTL FCStone Financial, a global financial services firm.

And while it may be freezing here for the next week, it’s still going to be planting season in a few months, and decisions will be made soon enough on farms about what to do in 2019. That’s true whether the US Department of Agriculture is open or not.

There's a lot of squeezing going on in the farm economy, and we already saw well over 600 Wisconsin dairy farmers decide they couldn't go on last year. If cash help and more responsible practices aren't coming soon from DC and Madison, you'll likely see more going under in 2019.
Posted by Jake formerly of the LP at 6:32:00 PM