I wanted to discuss what the Wisconsin GOP put out there to respond to Tony Evers’ first State of the State address last night. Fortunately, Assembly Speaker Robbin’ Vos put the whole speech up on the Internet, which makes it easier to laugh at examine point-by-point.

Let’s start with Vos trying to sell what is clearly the baseline WisGOP premise of 2019 – that Wisconsin is in good shape and can’t turn back from the road we’re on.

You simply can’t ignore the facts. The Wisconsin unemployment rate is at its 11th straight month at or below 3 percent. New businesses are up nearly 7 percent. We’re seeing the fewest mortgage foreclosures in 18 years. Exports have increased by 3.2 percent. Tourism spending now tops 20 billion dollars. And Wisconsin families have the lowest tax burden in nearly 50 years. Economists agree that the state economy is the best in decades.

A few things to unpack here.

Oh wait, here’s how. Wisconsin has been “helped” in this stat by our lousy population growth, which is likely related to regressive WisGOP policies driving people out of the state. In fact, the newest figures estimate that the number of people “employed” in Wisconsin dropped by nearly 1,700 last year. The unemployment rate only got lower because the Wisconsin labor force was estimated to have fallen by even more (9,200+).

2. No mention of where the “new businesses are up 7%” and “exports have increased by 3.2%” are from, or the time period involved. Are the “new businesses” the Boy Scout clubs that Walker used to count? And if exports are up 3.2% in Wisconsin since 2011, that doesn’t mean much when US exports are up 23.2% nationwide in the same time period, and 6.8% in the last 12 months measured.

3. Increased tourism spending and fewer foreclosures doesn’t really reflect Wisconsin’s policies as much as it reflects a US economy that’s been growing for each of the last 10 years. As with the other statistics, where is your “THANKS OBAMA”?

The cynical WisGOP “things are great because of us” spin continues.

….Wisconsin is on a roll and Republicans will not allow it to slip backwards. We’re committed to keeping your taxes low, the state pension fully funded and our budget balanced. We can increase our investment of K-12 education to two-thirds funding, without raising income or sales taxes.

1. The state pension has been fully funded for decades, and the only way it won’t stay that way is a multi-year bear market or a WisGOP raid on it.

2. Budgets have to be balanced at the end of the year on a cash basis, and have been for each of the last 16 years (although Scott Walker had to skip debt payments to do so in a couple of those years).

3. The question is not whether we can get to 2/3 funding for K-12 schools, but what we do with that funding. As the Legislative Fiscal Bureau noted last month, we are nearing 2/3 today, with funding reaching 64.9% last year. But what Evers wants to do is actually put more money into the classroom instead of having it go to a property tax cut, which is the direction Vos and the rest of WisGOP have chosen in the Age of Fitzwalkerstan.

As President Ronald Reagan once said, “As government expands, liberty contracts.” He also said, “Freedom is never more than one generation away from extinction.” Republicans in the legislature won’t forget Ronald Reagan’s sentiments. We won’t let government grow out of control and we won’t let socialism to take root in our state.”

Jud Lounsbury of the Progressive had the perfect response for this last night.


Great news!!! Robin Vos just announced that socialism won't take root in Wisconsin... Which means Foxconn and the 4.6 billion going to support it has been canceled!!!

In addition to ending the Fox-con, does this also mean that all of those Vos constituents who were threatened with having their land taken from them by eminent domain and other local government actions for the (now-delayed) Foxconn project can get their homes back?

I promise you: Republicans will fight for and protect your freedom, from unnecessary red flag gun laws to the expansion of government-run and controlled health care. We will keep spending in check, continue our successful school choice programs and most importantly, protect the unborn.

Let me repeat another point I made yesterday – How is expanding Medicaid, which pays for services that individuals usually get through PRIVATE PROVIDERS, “government-run and controlled health care”? It’s not. It just keeps working-poor individuals from being left to the mercy of insurance companies for their coverage (wait, that is a bad thing in Koch/ALEC-World, isn’t it?)

And the party of Foxconn, WEDC handouts, numerous tax-funded lawsuits to protect gerrymandering and other sketchy GOP acts, and unlimited vouchers are saying they’ll “keep spending in check”? COME ON.

By the way, when Vos claims vouchers are “successful”, what does he mean by that? The only way they’ve been successful in Wisconsin is by defunding public schools and funneling those tax dollars to Robbin’s Betsy DeVos-associated donors. 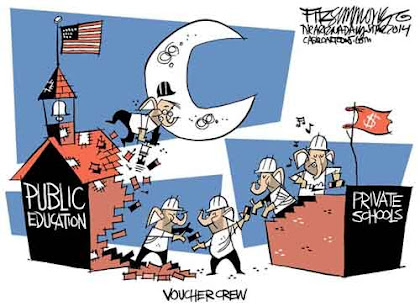 It’s also rich to see the thrice-married Vos pandering to the fundies with talk about “protecting the unborn” (dude, we have the Google). Vos also feels a need to fluff the gun nuts, which puts him out of touch with the results of November, where Dems made big gains in suburbs around America partly due to the GOP’s cowtowing to the NRA, including the Milwaukee area. See how well both of those strategies work for you in 2020.

Then there’s this idiocy.

This past week, Assembly Republicans moved forward on a middle class tax cut using the governor’s framework. Unlike Governor Evers’ original proposal, our plan doesn’t raise taxes on farmers or manufacturers. It uses the GOP surplus to pay for it. The tax cut is targeted to families making under $150,000 and individuals making under $100,000. It saves a married couple with a median income more than $300 annually. We can make this middle class tax cut a reality.

There is no “GOP surplus”. There may be some extra money left over in the state’s checkbook at the end of this Fiscal Year, but as the Wisconsin State Journal’s Matt DeFour reminds us, it would blow a hole in the budget unless other things happen that make up the difference.

A surplus is the annual difference between revenues and costs. The $588 million is a pile of cash, not really a surplus. Last year the surplus was $9.8 million. This year it's $33.9 million. How does it pay for an ongoing $338 million annual reduction in revenue?

Given that costs of prior Walker/WisGOP spending commitments and debt keep going up, there is no extra money lying around that can be given away in a tax cut. Taxes could be re-prioritized and/or other spending can be cut, but it can't just be given away. Go back to 2014 for proof, when a pre-election GOP tax cut led to a revenue shortfall and a $2.2 billion deficit in the budget that started in 2015.

Vos then turned around and told reporters last night that Evers' proposal to offset the tax cut by reversing prior tax cuts would be building a budget on a “house of sand”. WHAAAA??? Sorry Robbin, but a “house of sand” is giving the one-time money away and hoping for another 2 years of economic expansion to pay for everything. These guys truly think “up is down.”

Lastly, Napoleon doesn’t seem to understand that clever map-making does not make for a mandate for GOP policies.

Tonight Governor Evers said he expects the legislature to take up the budget that he crafts quote “by and with the people of our state”. We will consider the ideas in his budget but unfortunately, his ideas are only focusing on one side of the aisle and not the vast majority of Wisconsin. If his budget is merely a tax-and-spend wish list, one that would never pass this legislature, his budget would amount to political gamesmanship and the words of bipartisanship he said tonight will ring hollow. Every person who runs for public office wants to change their part of their world for the better.

In 21st Century GOPspeak, “focusing on side of the aisle” means “not giving the GOP everything we want.” The party that engineered a lame-duck Power Grab before Evers could take office has lost any right to talk about “political gamesmanship” and “the words of bipartisanship.” Tony Evers got a helluva lot more votes in November than Robbin’ Vos, as well as the combined vote totals of the gerrymandered GOP Assembly, so I think he’s earned the right to ask for some things.

By the way, what is a budget if it’s not a “tax-and-spend wish list”? You do need taxes to pay for services, you know. Now, Robbin’ and his fellow ALEC/GOPs can change what they like out of that and we’ll see what we end up with when/if that budget makes it out of the Legislature. But I dare them to name the cuts that they will have to put in without the $360 million or so in savings from Medicaid expansion, or show us how they plan to further neglect local governments that have had to hold pass numerous referenda and wheel taxes just to stay afloat.

I noticed those realities weren’t mentioned in Robbin’ Vos’ speech last night. Not surprising when you have a 2010s GOP that has made operating in cynicism and bad faith their trademark. And WisGOP’s contempt for voters shows in the easily-debunked rhetoric one of their leaders tried to throw out there last night.
Posted by Jake formerly of the LP at 5:47:00 PM