Just in time for Earth Day, a couple of Wisconsin GOP Congressmen decided to ridicule the idea that we should have cleaner air and slow down climate change. And they picked on a segment of Alexandria Ocasio-Cortez’s Green New Deal legislation that mentions a reduction in methane and other gases that help to heat up the planet.

What follows is apparently what you get for “humor” in WisGOP World, which appeared on a podcast that Congressman Sean Duffy (from the Real World) puts on.

"In Wisconsin — it's shocking — they want to get rid of our cows," said Duffy, the 7th District congressman from Wausau. "Because cows have too much gas."

The Green New Deal resolution didn't actually call for killing off cows. The cow reference appears to come from a fact sheet released in February that read, "We set a goal to get to net-zero, rather than zero emissions, in 10 years because we aren’t sure that we’ll be able to fully get rid of farting cows and airplanes that fast."

But Duffy and Steil still predicted the convention would have an anti-bovine bias. And they went on to compare security plans for Milwaukee to efforts to build a wall at the U.S.-Mexico border.

"I think it's great they're coming to Wisconsin, so not only are they going to talk about killing our dairy industry... But around the perimeter of the convention, do you know what they’re going to have Bryan?" said Duffy. "A fence or a wall. And they’re going to have a wall there because their walls are not immoral. Walls actually work." 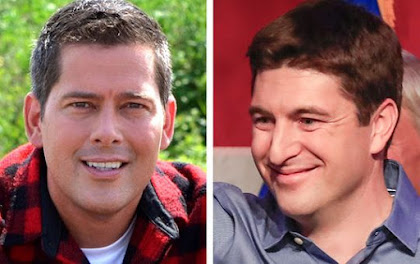 When you're hooked on Koch, you say and do stupid things.
I guess these GOPs think making these “jokes” are a way to avoid actually having to think about climate change. But outside of BubbleWorld it’s pretty pathetic, especially given the troubles that real dairy farmers continue to have in Wisconsin.

Esquire Politics writer and Marquette University graduate Charlie Pierce saw this idiocy, and put the callousness in its proper context.

Duffy is the former Real World contestant whose career in the Congress has been marked largely by success that is not his own; his wife, Rachel Campos-Duffy, occasionally pops up on The View to talk pullulation and politics. Steil is the guy who sat himself down in Paul Ryan's old seat. Both of them, of course, are lying about the Green New Deal's propensity for bovine genocide.

That farm crisis is showing little sign of slowing down in Wisconsin. There have been 265 dairy farm closings so far in 2019, which is a faster pace than the record pace of closings in 2018. And prices are not likely to rebound enough to keep others from giving up the business in the near future. 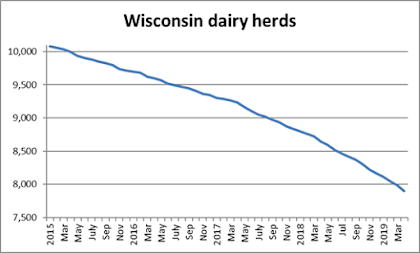 Pierce also notes this report by David Wahlberg in the Wisconsin State Journal from earlier this year, which said that the hard times have led to an increase in rural people deciding not just to end their businesses, but to end it all.

Wisconsin, which had a record 915 suicides in 2017, may be seeing a surge in suicides and suicidal thoughts among farmers, who are facing some of the worst economic challenges in years, experts say.

Exact numbers of suicides among farmers aren’t available, and authorities say some deaths reported as farm accidents are actually suicides.
But calls to the Wisconsin Farm Center, which helps distressed farmers, were up last year, including a 33 percent increase in November and December compared to the same two months the previous year….

The anguish is approaching that of the 1980s farm crisis, though interest rates today aren’t as high, said Frank Friar, an economic specialist at the farm center who has done similar work for decades.

“There’s so much volatility out there and so much unknown, it makes people think negative,” Friar said.

Oh, but Reps Steil and Duffy are the ones who understand the “little guy” and aren’t those elitist liberals, so they’re the ones to speak for rural Wisconsin, ain'a? Who cares if your community dies because of WisGOP policies as long as you get to stick it to us uppity types in Madison? Isn’t that right, 715? Ain’t that true, Walworth County, Burlington and Western Kenosha?

You folks want to keep losing with these pretty faces who are too bought off to do what it takes to stop the bleeding? Or do you want members in the Capitols of DC and Madison who actually care, and might give your farms and towns a chance? That’s the choice you have, and you need to choose better than these jokers if you want to survive.
Posted by Jake formerly of the LP at 5:27:00 PM