When Dems in E Wisconsin vote, Dems win the state. But they didn't in Supreme Court race

During the week, the Wisconsin Elections Commission released the finalized numbers from the state Supreme Court race earlier this month. And it allowed me to run a couple of comparisons that prove the vital role of the level of turnout in that race. There were less than half the total number of votes in April 2019 than there was in November 2018 (which is a big reason why statewide races shouldn't be in April in the first place), and only 14 counties didn't have at least a 50% dropoff.

But the smallest drop-offs were in Dem-voting Dane County (listed in blue ion this chart) and the GOP-voting WOW Counties around Milwaukee (listed in purple), which mean they made up a largest part of the electorate in April's Supreme Court election than they did in November. At the same time, the City of Milwaukee (marked in red near the bottom of the chart) dropped off by 70% from November's totals, which means that they made up a notably smaller amount of total votes this April. 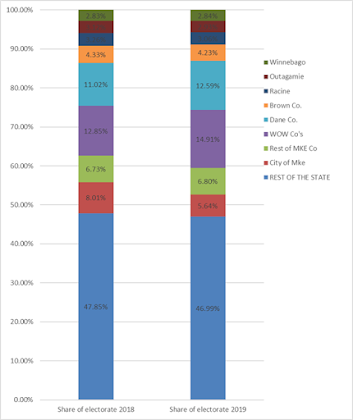 From these numbers, I took the Hagedorn vs Neubauer percentages in each county, and then looked at the vote totals of both the 2018 Governor's race and the 2019 Supreme Court race. I then created an index that asked this question "What if the percentages for Neubauer and Hagedorn remained the same, but every county had the same percentage of the total Wisconsin vote that they had in November 2018?"

What I found is that Neubauer gained in Dane County due to their higher turnout, but Hagedorn gained almost as much in the WOW Counties and in the rest of the state. But the race swung due to the lower turnout in the pro-Dem City of Milwaukee, which cost Neubauer more than 13,000 votes in a race that Hagedorn won by less than 6,000. 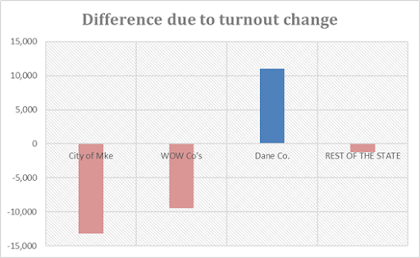 It's much like how lower turnout in Milwaukee was a big reason behind Hillary Clinton's loss in Wisconsin in 2016, and it tells us that Wisconsin Dems need to hammer down the point that ALL ELECTIONS MATTER. If voters in the majority-minority City of Milwaukee sit out elections, they will continue to suffer under the thumb of right-wing Republicans who want to disenfranchise and devalue the lives of people of color, along with everybody else in the state's largest city.

What's alarming is that the second-largest state to drop off as a share of the electorate in the Supreme Court race was Kenosha County, with a decline of 65% in the amount of voters. That likely played a significant role in switching that county from voting for Democrat Tony Evers in November to the right-wing Hagedorn in April, and it seems that Kenosha County is quickly becoming a state bellweather.

That helps explain why I've been getting emails from the Democratic Party about the State Assembly race in the 64th district, which is mostly in Kenosha County, but is gerrymandered to have a Dem in office in order to concentrate rural Kenosha County into 1 Republican district. That played out in 2018, when Republicans didn't even bother to run a candidate against Peter Barca, and Tony Evers won it 56-42 in the Governor's race.

But over 24,000 people voted in AD-64 in November. Now look at the results from that district for the Supreme Court race, which only had 9,000 votes cast in that race in AD-64.

So if there is a small enough turnout, you can see where the Republicans could steal an Assembly seat for at least the next 20 months, much like how they took advantage of lower turnout to sneak out a win in the State Supreme Court race earlier this month.

Which leads to a simple point - when more people vote in Dem-leaning areas, Dems are more likely to win. Last November proved that the corollary is NOT necessarily true - Republicans generally don't have the numbers on their own to win statewide elections in the face of a motivated Dem electorate. This is why Dems swept state offices last November, and won presidential and US Senate races in 2000, 2004, and 2012.
.
So Dems better be making sure they're getting the name of Tip McGuire out there and contacting people in Kenosha and UW-Parkside to get to the polls on Tuesday, if they want to avoid what would be an embarrassing and meme-setting loss in Assembly District 64.
Posted by Jake formerly of the LP at 11:33:00 AM