So now even Foxconn wants to change the Fox-con package?

I originally found myself concerned but also heartened by Governor Evers mentioning that he wanted to negotiate the Foxconn boondoggle this weekend. It’s an opportunity but also a chance to make this worse, especially for the Governor.

Because of recent media reports, I also want to clarify aspects of the conversation from our March meeting. At that meeting, you indicated that Foxconn intends to suggest several changes to the existing agreement to better align the terms with the evolving project and global marketplace. To my knowledge, this was the first time either Foxconn or the State of Wisconsin had mentioned amending or changing the agreement approved in 2017. I am also aware that you updated Assembly Speaker Robin Vos and Senate Majority Leader Scott Fitzgerald later that same day and outlined for them your intention to suggest changes to the agreement with the State of Wisconsin in 2019.

It is my understanding that Foxconn will be submitting the necessary documentation for proposing changes to the WEDC agreement in the coming weeks. As we have discussed with Foxconn representatives, the State is identifying areas we believe will enable greater flexibility and transparency as the project continues to evolve. We will offer those changes in the same spirit of cooperation and constructive dialogue with you that has marked these first few months of my Administration.

As I’m sure you understand, Wisconsinites have a keen interest in understanding how many jobs will be created for Wisconsin residents and the types and compensation levels of such jobs. As those details become more clear about your initial phase of work, I look forward to receiving them so that we can all view this project with as much relevant information as possible.

Wait, Foxconn met with Speaker Vos and Senate Leader Fitzgerald and mentioned the deal was changing? That's not what Vos and Fitz were spinning when they complained about Evers' announcement last week.

Vos and Senate Majority Leader Scott Fitzgerald of Juneau continue to back the subsidies and tout the pay-for-performance nature of the agreement, noting taxpayers don't provide subsidies unless the company meets its obligations.

“I am adamantly opposed to the governor making a one-sided attempt to reopen the contract,” Fitzgerald said in a statement. "The state is not in a vulnerable position and if the job growth and investment doesn’t come, the state doesn’t pay."

Vos in his radio interview said Foxconn is committed to creating 13,000 jobs. The project is in Vos' Assembly district.

"I have met with the company more times than I can count and every single conversation has always been focused on the idea that their goal has never wavered from creating 13,000 jobs," he said.

Oh, so you guys chose LYING TO THE PUBLIC to try to score cheap political points instead of trying to make the best of the awful situation YOU put the state in. Sounds like 2010s WisGOP "leadership" to me, alright.

But why would Foxconn want to change what seems to be a massive giveaway in their favor? Let’s go back to this excellent analysis of the Foxconn contract, which Jon Peacock of the Wisconsin Budget Project laid out two months ago. One point Peacock made is that Foxconn has likely already broken the terms of its contract with WEDC, but the GOP-controlled WEDC Board hasn’t been too keen on going after Foxconn for it.

There has been almost no public discussion of the fact that the contract makes a large portion of the cash payments to Foxconn (i.e., the so-called investment “tax credits”) contingent upon building a Generation 10.5 LCD factory. Yet Foxconn first announced last June that that’s not what it plans to build. That decision appears to make Foxconn ineligible for the 15% tax credit for its expenditures for land and buildings.

Perhaps one reason that aspect of the contract has not gotten much attention is that insiders may have thought that WEDC would be willing to ignore it. (WEDC CEO Mark Hogan suggested just that, in comments made last August, claiming that “The contract also provides the company the flexibility to make the necessary business decisions to ensure the success of the project,” and indicating that he was not concerned that the company has changed its plans.) However, it will be harder to ignore the original contract, now that it appears that the revised plans will yield far smaller state and local benefits than what Foxconn originally promised.

Sure enough, here’s Hogan saying earlier on Tuesday that there was nothing to worry about with Foxconn. Despite the downsizing of plans and numerous promises that haven’t been fulfilled, the Walker-appointed WEDC boss says nothing needs to be changed at this time.

If the company spends less or creates fewer jobs than originally envisioned, then "everything scales back as a result of that," Hogan said. "And that's already built into the contract. So from that perspective there's no need to renegotiate the contract."

He did not say whether the contract should be renegotiated for other reasons and declined to say whether Foxconn was seeking changes to the deal….

Hogan took a different stance on whether the company would create 13,000 jobs.

"I think they've continued to make that commitment," Hogan said. "And again I think the contract is scaled in a way that whatever they end up employing, that that's what they'll get. It's a pay-for-performance basis." 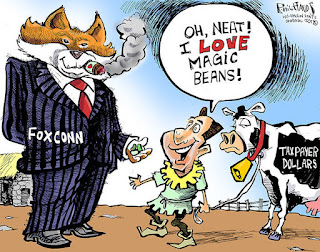 No, nothing to worry about despite the fact that the products that were promised will not happen, and because the company has hinted at automation across its product lines that will drive up the capital expenses that get paid back at a rate of 15%. We sure we have to wait 5 months to fire this bum, Governor?

Going back to John Peacock’s analysis at the Budget Project, he mentions that all Foxconn has to do to get 15% of their building expenses and 17% of their salaries written off is to have 520 people employed in the state at the end of this year. That number grows to 1,820 at the end of next year, which seems to be a maximum number of jobs that you can expect from the smaller plans that Foxconn has for today. Peacock says that this drives UP the cost to taxpayers for each job, and lowers opportunities that were promised to certain underserved populations.

In light of that factor, plus all the upfront subsidies that are independent of job creation, the total cost of state and local subsides will be much higher per job if Foxconn builds a smaller plant with fewer employees than initially promised. The huge subsidies for each job created are a concern for many reasons, including the fact that the revisions to Foxconn’s plans make it far less likely that project will have the purported employment benefits for blue collar workers and communities of color in southeast Wisconsin.

From here, it is worthy to review what the Walker Administration said in its “fact sheet” on the contract WEDC signed with Foxconn. Here are the thresholds required for Foxconn to get taxpayer cash sent its way for a given year, with the job having to pay a minimum rate of $30,000 a year ($14.42 an hour).

Peacock of the Budget Project notes that under this incentive timetable Foxconn would want to change the terms of the contract, to try to grab more money after the next two years (if it plans on staying here at all).

If Foxconn truly intends to go ahead with revised plans for the Mt. Pleasant facility, it will probably seek a new contract that helps it qualify for a larger portion of the nearly $3 billion of cash payments authorized by Governor Walker and the legislature. Whether the state should agree to any changes of that nature is an open question because a better option might be to cut the state’s losses. On the other hand, renegotiating the contract could be an opportunity to close loopholes and change other contract terms to make it a less costly and less risky deal for state taxpayers.

But before we can have those deliberations, state policymakers need to acknowledge that some of the presumed economic benefits of the Foxconn project are now in doubt and that the current contract poses potential problems for both Foxconn and the state.

So how would that work out? Molly Beck’s article in Monday's Milwaukee Journal-Sentinel pointed out that one option would be to reduce Foxconn’s package to the same type of handout that WEDC gives to most other businesses that pay up it feels is worthy of the help.

Where state incentive deals with companies typically have taxpayers covering 7% of salaries, Foxconn would get 17%. Foxconn would also get 15% of its capital investment paid back instead of the usual 10%.

"The fact of the matter is they have made a business decision and we're working with them and discussions are happening to consider changing the deal," Evers said.

On Monday, Evers said it is "premature" to elaborate on what changes he may be considering.

Would Foxconn accept a smaller amount of incentives and paybacks in exchange for lower thresholds to get payments? That seems to be a logical compromise.

Evers indicated that Monday Journal-Sentinel story that he held out hope for some kind of economic development from the foreign company that has had much of southern Racine County cleared for it.

Evers and Foxconn officials are in talks to rewrite a contract that lays out what size investments Foxconn must make in Wisconsin in order to receive taxpayer-funded subsidies — a deal that currently requires Foxconn to hit targets in job creation before any state tax credits can be paid.

"Maybe those goals are too expansive," Evers said Sunday in an appearance on WKOW's "Capital City Sunday." "Whether it's 1,300 jobs or 13,000 jobs, any governor of the state, including me, wants them to be successful and create as many jobs as possible."

Evers should be very careful with that, as he must understand that if he renegotiates the Fox-con deal, he will then own it. And as we saw with the lies Vos and Fitz spread last week, they will jump at any chance to shift the blame onto Evers if/when the Foxconn project fizzles out for good.

That’s yet another reason I think the best deal out there for Wisconsinites is to cut Foxconn a check that’s smaller than the $200 mil+ we are likely to give away next year of they reach 520 employees, and get them to GO AWAY. We can get this albatross off the books for future years if Foxconn leaves, and we can then use a more responsible incentive method with the infrastructure that is in place due to the Fox-con to attract a company that actually wants to have long-term roots in Wisconsin. 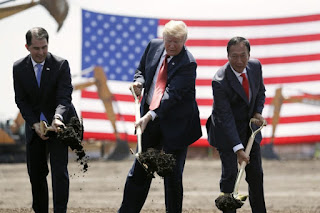 A deal with a better, more honest company would likely be at a fraction of the hundreds of millions we may have to shell out for a Foxconn project that won’t come close to what Trump and Walker tried to sell us 20 months ago. In addition, it would also take the state off the hook by not having to bail out the small-time GOP hacks in Racine County and Mount Pleasant that fell/were paid off by this white elephant, and borrowed hundreds of millions of dollars to buy up and build up the area.