Lots of industries are getting hit by the economic meltdown after the coronavirus breakout, and higher education is going to especially suffer from the COVID-19 recession.

The upheaval in higher education has been unprecedented already, with campuses closed for months, graduation ceremonies scrapped and entrance exams canceled. Administrators across the nation increasingly fear their schools may not reopen for the fall semester. In the meantime, many have canceled summer programs, sports camps and on-campus weddings – all of which would be lucrative most years. The double whammy of losing summer and fall income would hurt all schools, and it could be fatal to those that were already struggling.

“The hit is huge,” said Larry Ladd, a consultant with the Association of Governing Boards of Universities and Colleges. “They will have less financial cushion because that summer revenue is no longer is there.”

College finances are under siege on many fronts. Endowment values have fallen with markets. Fundraising is a steep challenge now. New and returning students may have increased need for financial aid, because many families have lost income in the Covid-19 downturn. Some colleges even fear they won’t be able to fill their freshman class for fall 2020 as students may decide to wait a year instead of starting online, which would strangle tuition revenue.

A lack of students and tuition revenue won't be the only hit the schools in the University of Wisconsin System, but even students that do end up taking classes may be less likely to live in campus housing...or may not be allowed to. That would be a major drop in revenue that universities count on to pay for dorms and the related food service that comes with it, while the food service and dorms will likely operate in some form if there are classes.

So something that usually breaks even or even makes money ends up being a lot of losses to take on, in addition to the cutbacks in jobs related to those on-campus operations. UW-Madison is an example of the difficulties that large schools with lots of on-campus housing are looking at.

UW-Madison anticipates a $100 million loss because of the COVID-19 pandemic that has thrown its campus into chaos as dorms are emptied, classes moved online and students told to stay away.

Chancellor Rebecca Blank said the $100 million estimate represents how much the university would lose if life largely returns to normal by June, a timeline that is up in the air as scientific models continue to shift depending on the public’s compliance with social distancing....

The financial loss includes reimbursing the majority of students living in residence halls for the time in which they could not live in the dorms or eat in dining halls. The university will also reimburse employees’ parking permits on a prorated basis.

“My expectation is there’s going to be a number of schools going out of business as a result of this,” she said, adding that she hoped none of the closures were within the University of Wisconsin System.

The largest step in the UW's fiscal adjustments was announced on Friday, as most staff are going to have to take some unpaid time off.

The University of Wisconsin System will furlough its nearly 600 administrative employees one day each month through June 2021 to save about $3 million.

Chancellors of UW campuses, where the bulk of the System’s 39,000 employees work, are making their own decisions on whether to furlough employees. UW-Milwaukee became the first to say it will “most likely” impose a campus-wide furlough for its roughly 3,700 employees. UW-Madison, which is bracing for the largest loss among the campuses with an estimated $100 million shortfall, expects to announce details by the end of the month.

The move marks the first time in at least five years that university employees will be placed on mandatory unpaid leave. Leaders have resorted to other measures — layoffs, buyouts and unfilled vacancies — to address budget shortfalls in recent years....

While UW-Madison can still get resources and staff with its research focus (which likely will become even more important in the Age of COVID-19) and its large donor base, lots of the other UW schools have little else to fall back on if there aren't going to be as many students around on campus.

And those schools are the bigger risk that I see going forward. Especially because there aren't reserves to fall back on for an extraordinary situation like this one. After a GOP fauxtrage regarding how much money the UW System had left over on July 1, in-state tuition was frozen, and all of the schools in the UW System were told to use up those reserves. So they have used them up. 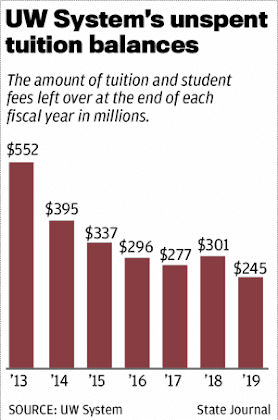 The other, self-sustaining funds have slightly increased over the last 5 years, but it's worth remembering that much of that is related to setting aside funds for projects and other future expenses, and the overall balance number has dropped. 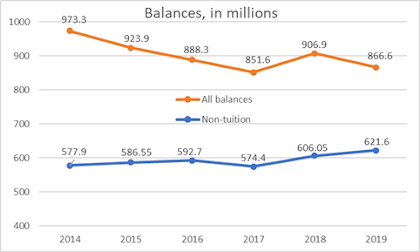 In 2019, this balance comes to about 19% of total costs, which sounds like a lot, but remember that is a number as of June 30, and the next 8 weeks have very little money coming in until the Fall semester starts up. Now add in the $170 million in losses that are coming Systemwide due to COVID-related sutdowns, and things get very tight.

And now let's throw in one last problem that'll mess up the UW System for next year. There is likely to be fewer international students, since you wouldn't think a lot of people would want to come over to and risk the health issues that might arise from the country that has the most COVID-19 cases in the world. Those international students pay full out-of-state tuition, and combined with fewer people likely taking classes or attending events on campus in the 2020-21, that's a lot of money that has to be made up for that isn't around for now.

There is some stimulus funding for higher education as part of the CARES Act and other bills ($14 billion in the CARES Act nationwide, much of it earmarked for financial aid). But that is temporary, and if we don't eradicate the coronavirus, it seems like we may not see a bounce-back to normal on UW campus any time soon. 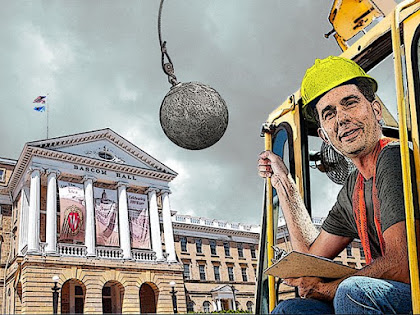 We already have put up with 9 years of defunding and denigrating of the UW in the Age of Fitzwalkerstan, but it would be a sad irony if Scott Walker and the ALEC Crew get their wishes of wrecking the UW beyond recovery after Walker is gone from office. Keeping the UW as a viable, competitive higher education system through this mess is going to be one of the biggest tests of former UW Regent Tony Evers' next 2 years.
Posted by Jake formerly of the LP at 8:02:00 PM