In March, Americans lost pay, but cut spending by much more

On the heels of Wednesday's big drop in GDP, we got an update on what happened to income and spending in March today. And as you'd imagine, both of those areas had a massive decline as the country shut down to deal with COVID-19.

These are historic one-month drops, as most recent recessions have had a gradual and continual decline in these statistics.


It matches up with the brutal consumption figures in Q1 GDP the 701,000 jobs lost through the middle of March, and the millions of new unemployment claims in the 2 weeks after that.

As you’d imagine, a big driver of the decline in income was because of fewer wages and salaries as the layoffs started to pile up in March. 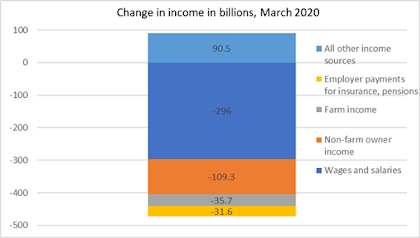 That increase in "other income sources" comes in 2 ways, and neither are good.

1. Employees not paying as much to Social Security and Medicare...because they're not working.

2. Unemployment income, which went from $26.2 billion in February to $65.3 billion in March. Given the $600 bonus unemployment and the large rise in number of people out of work, you can bet this number will be much higher in April.

Because consumption fell much faster than incomes had in March, that means the savings rate jumped to its highest level in nearly 4 decades, at more than 13%. 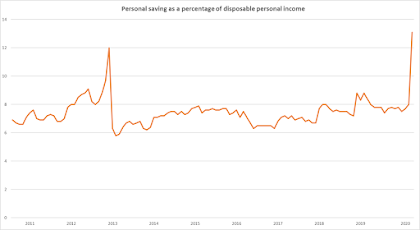 My guess is much of this is a lag effect on the income side when it comes to shutdowns, as people's paychecks are often delayed by 1-2 weeks vs the actual days they worked. The question here is whether the drop in income catches up in April to the drop in consumption, which would bring this savings rate back down to the 7.5-8% level that we were at in the last year.

Prices also went down in March with the decreased demand, leading to a 0.3% decline overall and goods in particular had prices start to fall (-0.9%). That be nice if you still are getting the same amount of income ass you were in February, but not so nice if you work for any of the companies having to deal with even lower prices for their products. Those lower prices help to explain a lot of the recent layoffs that have been coming outside of industries that are subject to Safer at Home restrictions.

While March was historically bad for income and spending, we know April will likely be much worse, with a full month of COVID-19 shutdowns and losses spreading across more sectors. And while a lot of righties are trying to claim that reopening the economy is all we need to get back to the levels of early 2020, there will be a massive hole to dig out of, and not much else to keep incomes afloat after the stimulus checks are received.

If incomes don't rebound, why would you think spending would? And why would companies hire back if there aren't as many customers paying for their products, either because they don't want to go out, or because they're sick/dead?
Posted by Jake formerly of the LP at 6:44:00 PM