Manufacturing slipped in March, except for cars and planes, which crashed

We know the overall US economy started falling apart in March, but there is wide variation depending on where you work. We got more insight in recent areas about one of these sectors - manufacturing.

While many of these types of businesses were not direct casualties of the COVID-19 shutdowns, the overall manufacturing sector still had a significant decline last month in new orders.

The 41% decline in transportation equipment included this amazing stat in aircraft production, which is understandably dead with no one traveling.

That’s not a decline of $16.35 billion. That a negative dollar amount of new orders. My guess is that means not only were there no new orders for planes in March, but that two months of prior orders got canceled on top of that, which is economically horrifying. 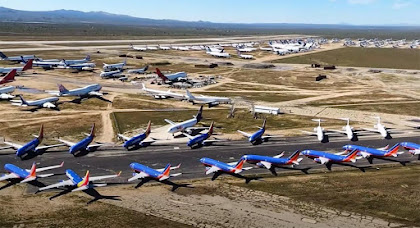 Not going anywhere for a while?
The pattern repeated in the other manufacturing statistics, with fewer items going out in March, and more goods piling up in inventory overall. And a lot of those losses were also in the transportation industry.

On the flip side, if you remove the declines in aircraft, auto, and other transportation equipment, then the decline was tepid. The decline in new orders was smaller than the one in the previous month (-0.2% in March vs -0.7% in Feb), and shipments were down by the same 0.3% rate that they were in February.

The bad news is that it means manufacturing was at-best flatlining before COVID-19 became a big deal in the country, and that the bigger downturn may come in April, as the lack of demand starts to ripple through. And sales to foreign markets aren’t picking up the difference, as that part of manufacturing also fell down in March.

A sizable amount of that drop was in exports came in automobiles, down nearly 18% for the month, and a 7.5% decline in petroleum and other industrial supplies, likely reflecting the crash in the oil markets that started in March, and sped into absurdity this month. And the drop in imports is also a bad sign, reflecting the lower demand in the US, particularly in automobiles (down 9.0%) and consumer goods (down 8.3%).

Both imports and exports of goods had fallen a bit from where they were this Summer, but this month had a much larger drop. 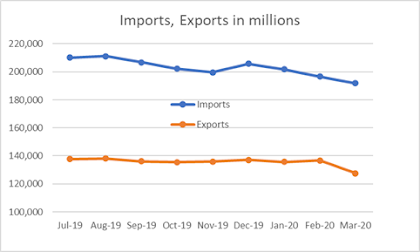 But much like a lot of other economic and social damage, the decline triggered (and/or accelerated) by the coronavirus breakout was merely beginning in March, with it likely to be significantly worse in April. Large-scale layoffs in manufacturing seem to be the next shoe to drop, and if you look at the Wisconsin WARN notices, they have already begun in many places in our state.

Those businesses aren’t being closed directly by workers having the virus or Stay at Home orders (well, outside of food plants, who are screwing themselves and us), but the loss of business and demand likely took them over an edge they had already gone near. And I don’t see how manufacturing rebounds any time soon, even if a ton of service businesses were allowed to open tomorrow.
Posted by Jake formerly of the LP at 6:29:00 PM