Once Dane County reinstated their mask mandate for indoor public places this week, you knew what was coming soon afterwards, and you knew who it was coming from.

ICYMI: WILL filed an original action with the Wisconsin Supreme Court urging a review of the authority of the Dane County public health officer to issue a new county-wide mask mandate.

This is where I remind you that the Bradley Foundation-funded WILL sued Governor Tony Evers last year for Safer at Home and mask restrictions, claiming that the Legislature needed to give approval to these rules from the State. The success of the lawsuit (and the WisGOP Legislature's refusal to do anything) meant that local communities ended up deciding the appropriate level of restrictions. Now that a local community is doing something the Bradleys don’t like, they find some tool claiming that they have a God-given right to put others at risk, and sue again. There’s no honest reason for this lawsuit, which exposes the real reason for it. Because the Bradleys want to play a divide and conquer game about “those liberals in Dane County”, and to try to turn the issue of public safety into an argument of “personal freedum” combating “those bureaucrats in those big cities.” And it reminded me of another earlier bit of Astroturf during the pandemic. Remember when there were all those rallies and Faux News time in Spring 2020 demanding to “reopen the economy?”, even as few people knew how this virus spread, without a vaccine available? Bradley money was helping to pay for that garbage.

The Milwaukee-based Lynde and Harry Bradley Foundation, a major source of funding for right-wing groups with over $854 million in assets, gave grants to FreedomWorks Foundation and the Wisconsin Manufacturers and Commerce Foundation this year to specifically assist with their efforts to rapidly reopen the economy amidst the coronavirus pandemic…. In a list of Quarter 2 grants posted to its website, Bradley staff lists $100,000 to the FreedomWorks Foundation to "support the Save Our Country initiative." Save Our Country was launched in April by FreedomWorks Foundation, the American Legislative Exchange Council (ALEC), the Tea Party Patriots, the Committee to Unleash Prosperity, and other right-wingers to push for a "quick" reopening of the states after many had enacted stay-at-home orders as confirmed coronavirus cases rapidly increased. Bradley added another $275,000 to FreedomWorks Foundation for "general operations." In June, The Guardian reported that Save Our Country had raised "just over $800,000 towards a $5m goal for projects including new ad efforts – online, radio and print – to rev up grassroots pressure to reopen states faster, plus curtail more federal spending and promote business-favored tax cuts." Bradley is the first Save Our Country donor identified.

And much like with the Safer at Home measures in Spring 2020, the Silent Majority understands the need to take action to preserve public health. Bruce Thompson has a great breakdown in Urban Milwaukee of the recent Marquette Law School Poll of Wisconsin that showed an overwhelming majority of state residents planning to be vaccinated, but a noticeable partisan divide between Republicans and everyone else. 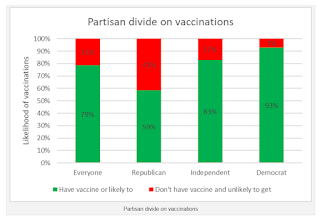 Also in that poll, 62% of Wisconsin residents said that last year’s school closings and capacity reductions at businesses were appropriate, and not an overreaction. And the same split among party members exists.

But where are our rallies and community “activism”? Well, there’s one obvious reason.

All these school board and other meetings get packed with anti-maskers/vaxers because the people who support mandates don't wanna be around a bunch of unvaccinated assholes who aren't wearing masks.

That’s another area of the masking/vaxxing debate that reeks of Astroturf – whether to require masks in schools (since kids under 12 can’t get vaxxed at all). And guess who’s recently stepped into that debate. 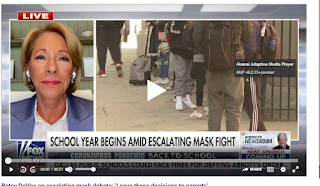 Former Education Secretary Betsy DeVos on Tuesday said masking children in schools is a decision that should be left to parents. "I think the right answer is that parents really need to be in a position to decide what is best for each of their children," DeVos told "America’s Newsroom."[on Fox News] "We know that, for some, kids feel more comfortable if they are wearing masks. Others do not and [feel they] are detrimental to them," DeVos said.

Yeah, how’s that working out for Florida these days, Betsy? Menawhile, in the real America, a nationwide Axios/Ipsos poll from this week shows nearly 70% of Americans support mandatory masking in schools. And like many other thing, Republicans are out of step with the rest of the country.

And guess who has used any excuse to defund public schools in the name of “giving parents choices” for decades? Yep, it’s the Bradleys. And if these guys can't capture public school boards like Oconomowoc and force out school board memebers who value classroom safety over parental "freedums", they will use mask mandates as an excuse to push vouchers and homeschooling. This will send tax dollars out of community schools and into the "Jesus rode a dinosaur" schools. Something stinks here, and it’s time we start following the money on it. And make these scam “charities” that are behind this Astroturf pay the same taxes the rest of us have to.
Posted by Jake formerly of the LP at 10:34:00 AM