Same old jobs story in Wisconsin - some gains, but maxed out at sub-3% unemployment

Following the trend in the country as a whole, Wisconsin’s job market followed the US jobs trend higher in May.

The Department of Workforce Development (DWD) today released the U.S. Bureau of Labor Statistics (BLS) preliminary employment estimates for the month of May 2022, which show the number of Wisconsinites employed at a historic high of 3,059,300. The data also show an increase in Wisconsin's total labor force for the sixth consecutive month. • Place of Residence Data: Wisconsin's labor force participation rate was 66.5 percent in May, unchanged from April, and 4.2 percentage points higher than the national rate of 62.3 percent. Wisconsin's unemployment rate in May was 2.9 percent, up slightly from April's historic low due to an increase in active participants in the labor force. • Place of Work Data: Wisconsin total nonfarm jobs increased from April 2022 to May 2022 by 2,200 while private-sector jobs increased by 1,800 over the same period.

Both “employment” and jobs have grown by decent amounts in the year since most Wisconsinites were able to be fully vaccinated, although the number of jobs has yet to reach the pre-COVID peaks like the number of workers has. 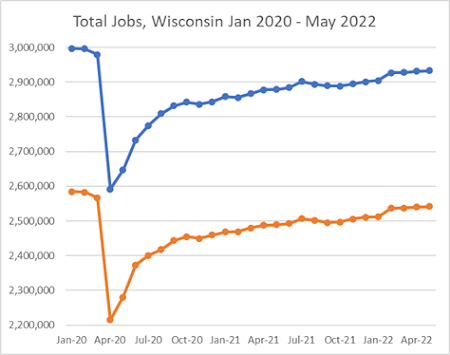 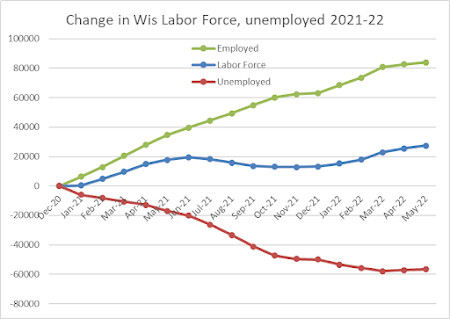 The difference between "employment" growth and job growth may not necessarily be a bad thing either, since wages and supports may be strong enough these days so that some people don’t have to have multiple jobs. There is a bit of concern in that construction and manufacturing had a seasonally-adjusted decline in jobs for May. But that also seems to be a reflection of lower-than-normal seasonal hiring. Job change, Wisconsin May 2022
Construction
Raw increase +4,900
Seasonally adjusted -1,700 Manufacturing
Raw increase +400
Seasonally adjusted -1,200 We saw a similar story in Leisure and Hospitality for May (+16,600 raw increase, +200 seasonally adjusted), and the low unemployment rate will make Summer hiring even more difficult to fill. And if we truly are maxed out on the number of people available to work, we may see job growth may “decline” or "stagnate" in months where employers can’t hire as many people as normal. But even with another 54,500 jobs added in the state since May 2021, Wisconsin's 1.9% rate of job growth is less than half the 4.5% rate of growth the nation has seen in that time period. And with 2.9% unemployment in a state that has labor participation more than 4% above the national average, it makes me wonder just how many more jobs can be added in the state today. June’s report should be intriguing to see if the gap for Summer employment is able to be closed, and why they might or might not be closed (needs lessen? More hiring? Or can’t find people to work at a certain wage rate?). We know for sure that Wisconsin still had a tight labor market in May, and those imbalances aren’t likely to all go away in one month. It also tells us that the longer-range challenge for the state is to get people to locate to a cold-weather place that traditionally hasn't paid as much as nearby big markets like Chicago or the Twin Cities. And a regressive Legislature that seeks to outlaw abortion and is outright hostile to public education isn't going to get anyone with talent to want to move here, so getting rid of those bums (and certainly not having them in the Governor's Office signing more bad laws) is necessary in order to increase this state's economic potential.
Posted by Jake formerly of the LP at 2:56:00 PM