Wisconsin's incomes rising fast, and above the rest of US

Earlier this week, we got a look at income growth by state for Q1 2022. And look who did really well! 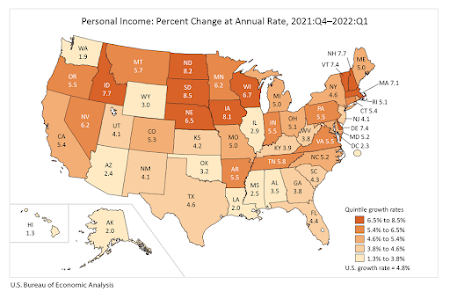 See Wisconsin in the dark orange? That means we were in the top 10 out of all the states for income growth in Q1 2022, at 6.7% income growth (annual rate). Given that Iowa, the Dakotas, Nebraska and Minnesota also scored high, I had suspicions over why the increase was so much. And indeed, farm earnings took a big jump in the Heartland for the first 3 months of this year. Change in farm earnings (annual rate), Q1 2022
Iowa +$1.56 billion
Minn +$1.34 billion
Wis. +$1.28 billion
Neb. +$1.08 billion
S. D. +$0.73 billion
N.D. +$0.59 billion But while that amount of earnings is large among all of these states, Wisconsin also got a lot of increased income from other areas, and had non-farm earnings give a bigger contribution to the gains than any of these other 5 states. 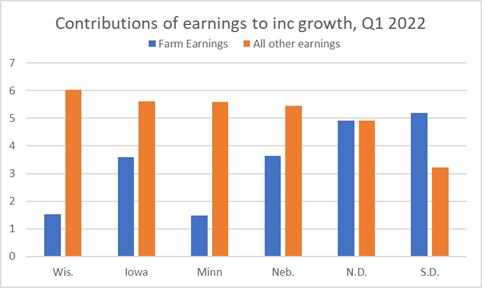 This report also had revised figures for all 4 quarters of 2021. Every state had a big jump in income in Q1 2021 and then dropped off severely in Q2 of last year because of stimulus checks that were sent out in March, so I think it’s fair to start from Q3 and look at how Wisconsin’s income growth has fared vs other states in the 9 moths measured since then. When you do that, you’ll see that Wisconsin did quite well for income growth, beating the US average in all 3 quarters, and up more than 15% (annual rate) in that time. 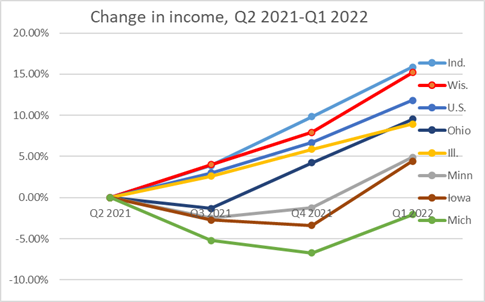 Yes, inflation eats away some of those gains. But still about half of those gains are real, which may help explain why state tax revenues continue to fly by estimates and adding to our already-massive budget surplus. Economic issues seem pretty trite to discuss after what's been going on in this country the last 2 days. But these numbers for Wisconsin might give a good indication why I'm not seeing any evidence of the "recession" theme that so many in GOP/media want to spin. Because things looked pretty darn good on the income side here, at least through March.
Posted by Jake formerly of the LP at 11:51:00 AM