Today's big headline in Wisconsin job news involves the release of the feds' Quarterly Census on Employment and Wages (QCEW). The Wisconsin DWD had pre-released some of these numbers in February, but now we got to look at how we measured up to the rest of the nation (use the handy BLS map to make your own stats and comparisons). You'll notice a certain pattern when it comes to looking at how we fared nationwide over the last 12 months.

Hey, we may suck in these job metrics, but at least we're consistently sucky! We also remain near the bottom of the Midwest for these stats (by the way, I define Midwest as the original 7 states that had Big Ten teams, not the 10 states I saw in other stories today)

The amount and rate of 12-month private sector job growth does seem to have steadied in the last few months, after declining for most of the first 2 years of the Age of Fitzwalkerstan. This chart shows that stabilizing (bottoming?) trend, and you can also clearly see the 1-month delay in hiring caused by the cold, rainy April, which is something to keep in mind as we still see snow on the ground with sub-freezing temperatures in mid-March. 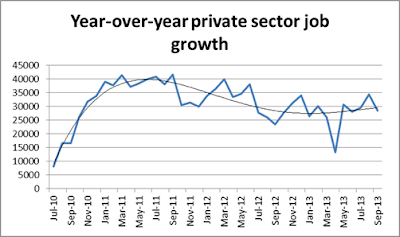 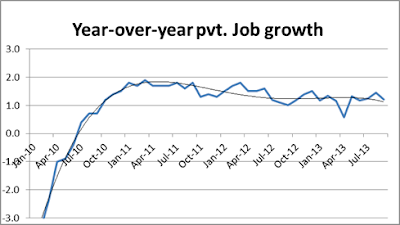 The last 3 months of 2013 initially looked strong in the monthly job releases, but I wouldn't expect a major increase from the 28,351 jobs gained from September 2012 to September 2013, just because a lot of those jobs seem to be seasonal, and the QCEW picks up a lot of these differences in the raw data. And even if the state measures up stronger than 35th place in the one-year report for all of 2013, it also will give us a complete look of the years 2010, 2011, 2012 and 2013 for all states, and given the poor performance the state put in for job growth in 2011 and 2012 (especially after Act 10 got passed), I'm not thinking that would be a report the Fitzwalkerstanis would be interesting in propping up.

Despite the happy talk from yet another lame and misleading DWD press release (still doing the "23rd in total number of jobs increased" thing when we're 20th in population? REALLY?), the 3rd Quarter QCEW did not have much good news for the state of Wisconsin. We're still in the bottom third for private sector job growth, we continue to trail most of our Midwestern neighbors, and the overall result of Walker/WisGOP job creation policies leave the state well below where it should be.
Posted by Jake formerly of the LP at 8:49:00 PM