Tomorrow is scheduled to include the release of the first Wisconsin jobs numbers for 2014. As usual, these have been delayed for the start of the year because the Bureau of Labor Statistics goes back and benchmarks 2013 and other years to more data, and they also update the seasonal factors that they use to translate raw data into the more commonly-used seasonally-adjusted data

As I've said before, I don't expect too many changes out of last year's numbers, as it appears to largely match the Quarterly Census on Employment and Wages, unlike in previous years when the QCEW was coming in higher than the monthly numbers, which led to higher revisions with the annual benchmarking.

As for January's numbers, a good indicator is the amount of unemployment claims that have been coming in. As you can see here, the numbers for the first 4 weeks of the year were less than previous years (to be expected in a growing economy), spiked up in early February (including a jump of more than 5,000 in one week), and has since retreated to a more normal number for late winter. 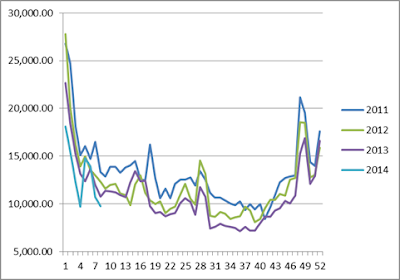 What's also worth mentioning in that January jobs "increases" are usually a reflection of lower-than-normal post-Holiday layoffs. For example, here are last year's figures.

So the drop in new unemployment claims may be a sign of a decent January jobs report, except that Michigan and Illinois have both reported their numbers for January, and both had significant losses. Neither of those states were reporting unemployment claims that were all that different than what they had this time last year, so maybe the bad weather kept anyone from hiring at the start of the year, even at January's suppressed rate.

It'll be sure to ignite the progress report on Gov. Walker's failing promise of 250,000 new jobs, but the benchmarking will be even more of an indicator of how that's going than the seasonally-adjusted January report will. Stay tuned on it, because you can bet whatever the number is, a whole lot of people will spin it as bullshit.