Labor being stolen from, so Walker wants more of it!

With Scott Walker announcing his plan to take his union-busting policies nationwide today, it seems like a good time to go over a paper released this month by Josh Bivens and (UW Ph.D) Lawrence Mishel for the Economic Policy Institute. I discovered this article through a post by Laura Clawson at Daily Kos (thank you Laura), and it illustrates just how the last 15 years of low taxes for the wealthy combined with 40 years of anti-worker economic changes have led to a massive increase in inequality, with gains in worker productivity being taken by the capital class.

Bivens explains the topline finding, which should infuriate any of you that aren’t greedheads and/or psychopaths.

Between 2000 and the second quarter of 2015, the share of income generated by corporations that went to workers’ wages (instead of going to capital incomes like profits) declined from 82.3 percent to 75.5 percent, as the figure shows. This 6.8 percentage-point decline in labor’s share of corporate income might not seem like a lot, but if labor’s share had not fallen this much, employees in the corporate sector would have $535 billion more in their paychecks today. If this amount was spread over the entire labor force (not just corporate sector employees) this would translate into a $3,770 raise for each worker. 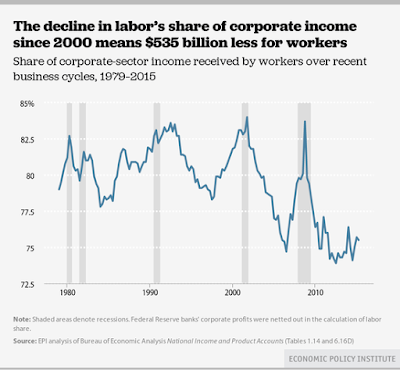 Notice that the only time this number spikes up since 2000 is when the stock market was crashing during the financial crisis and recession of 2008-2009, which gave a heavy hit corporate profits and capital incomes. Once the markets and corporate profits started to recover in the middle of 2009, you see how this number falls back down to the levels of Bush's second term.

Bivens and Mishel add that all levels of the workforce have taken advantage of better technology and attained better skills, which have increased productivity at their jobs. But that hasn’t translated into better wages for most of those worker segments.

Because one of the most widespread versions of our pay–productivity analysis tracks the pay of a subset (though a large majority) of American workers (private production and nonsupervisory workers, as in Figure A), critics have sometimes asked how we know that the productivity gains of recent years have not been driven nearly entirely by the much-smaller group of workers who are seeing well-above-average gains. Essentially, they are claiming that the productivity of the typical worker has stagnated….

However, the circumstantial evidence seems quite convincing that the pay–productivity gap is not driven by actual returns to individual productivity. Consider the following. Pay for the vast majority of workers and average net productivity tracked each other quite closely for decades before decoupling. Further, about 40 percent of all measured productivity growth in the post-1979 period was due simply to “capital deepening”—workers having more and better capital equipment to undertake production. This capital-deepening seems widespread across most workers in the economy. Highly credentialed workers today work with better capital than their predecessors did (lawyers and doctors now have Internet databases and imaging machines, for example), but so do less-credentialed workers (cashiers and construction workers have bar-code scanners and prefabricated materials to work with). Unless evidence is marshaled to show capital deepening was more pronounced among certain types of workers, one should imagine capital deepening alone should have broadly boosted productivity in recent decades.

Given the boost from capital deepening, if the decoupling of pay and productivity were driven by stagnation in the underlying productivity of the vast majority of American workers, one would expect fingerprints of this to show up as a stagnation of educational attainment or labor market experience of this group (the two observable characteristics of workers most associated with productivity). But the age and education of typical American workers did not stagnate or reverse in the post-1973 period. In fact, the BLS measure of “labor quality,” reflecting changes in experience and education levels, grew more quickly each year between 1973 and 2014 (0.33 percent) than it did from 1947 to 1973 (0.27 percent) (Fernald 2014). This improvement in labor quality did not occur just for the top 20 percent of the workforce. Among low-wage workers, for example, the median age rose from 32.4 to 35.1 between 1979 and 2014, and the share with at least some college attendance rose from 24.6 percent to 45.0 percent (Bucknor 2015). Similarly, the median worker went from having no college experience in 1979 to having at least some college experience by 2000 (Mishel et al. 2012).

So workers are more educated and better skilled than they were 40 years ago, can produce more due to better machines, but aren’t reaping the wages and benefits from these improvements.

What’s also remarkable in this Bivens and Mishel paper is that while some of the unhinging of productivity gains to wage gains is due to what they define a general “rising inequality of compensation (more wage and salary income accumulating at the very top of the pay scale),” in the last 15 years, just as much of this gap is due to capital being advantaged over labor. This is in sharp contrast to what we saw before 2000, as inequality of compensation used to be the overwhelming factor in any gaps that may have existed.

Contribution to gap between productivity and wages
1973-2014
Inequality of Compensation 50.4%
Loss of labor share of income 17.1%

Bivens’ and Mishel’s data note that while there was also a gap between productivity and wage gains from 1973-2000, “inequality of compensation” usually accounted for 4-5 times of that gap compared to labor’s share of that income, reflecting a general structural change in the economy that rewarded the richest Americans at the expense of most everyone else. Of course, preferring capital over labor also does this, as the 1%ers are much more likely to have money in stocks and assets compared to the poorer classes.

So a big reason why these wage-productivity gaps continue becomes obvious- the gains of workers’ increased efficiency are being taken from them by CEOs, and these CEOs are empowered by puppet politicians who promote policies that prefer capital over labor. And to solve this economic problem, Scott Walker wants to put the screws to labor even more, and give up even more of a share of the pie, without asking corporations or the wealthy to do the same (likely resulting in the rich and the corporate to steal even more)?

You wonder why we have one of the worst economies in the Midwest with this guy and his mentality in charge?
Posted by Jake formerly of the LP at 7:28:00 PM