So how do you grow business in Wisconsin?

The Republicans in the Legislature are having a series of "Economic Development Committee listening sessions" around the state with various captains of industry invited to speak their opinions on how to improve Wisconsin economic performance and attractiveness. Of course, representatives of labor aren't being invited to these meetings, but a lot of people connected to the scandal=plagued Wisconsin Economic Development Corporation (WEDC) are, which gives you an idea that much of these meetings have a GOP propaganda element intended to make the state's underperforming economy seem better than it really is.

The first of these meetings took place after the WEDC Board meeting last Thursday in Oak Creek. However, a WisBusiness report indicates that the WisGOP legislators who set up these meetings might not be hearing all of the "it's working" testimonials that they wanted these things to be.

But many expressed frustration at Wisconsin's reputation as a low-tech bastion of football and cheese, saying the Badger state lacks the "cool factor" needed to retain millennials and attract global businesses.

"To attract millennials we need to create an image that's we're a high-tech state," said Lisa Johnson, CEO of Madison-based BIOForward, a professional association for the bioscience, pharmaceutical, medical device and research industries. "We won't have any young people left and it's going to cost us a fortune," said Johnson, "unless we turn to a different message that we're high-tech in water, high-tech in engineering, in energy and bioscience ... if we could start having that image and we're all believing in it and we're all stressing our assets, like our university system, those are selling points."

This is the same Lisa Johnson who used to be WEDC's VP of Entrepreneurship and Innovation, and looked at Wisconsin's January 2013 rank of 47th for entrepreneurship and famously said "We suck, we're bad." She then left WEDC 6 months ago to take her current job at BioForward, which makes me wonder what she saw at WEDC, and if she realizes that the corporates in charge of that slush fund really don't care (or don't know) about how to generate true innovation and job creation.

There was one speaker in this "listening session" of this committee meeting that thought the "lower-tax, lower-service lower-wage" trend in Wisconsin is just swell, and needs to continue. And you won't guess where he works!

The WMC hack was immediately shot down by a real job creator.

But Harald Steltzer of Dohmen Life Science Services said, "I'm happy with the taxes here," adding that tax rates in his hometown of Boston are much higher. Steltzer said word just isn't getting out that Wisconsin is generating high-paying bioscience jobs that spawn "indirect" jobs as well.

Huh? It's almost like attracting talent and having a high quality of life is a better option for economic growth than the WMC model of stealing from workers and giving corporations free reign to screw things up as they please.

There was a great cartoon in Isthmus this week that went over this discussion over what really drives job growth, and how the Wisconsin GOP and their corporate puppetmasters completely ignore the reality around them when it comes to figuring out how to improve the state's lagging economy. 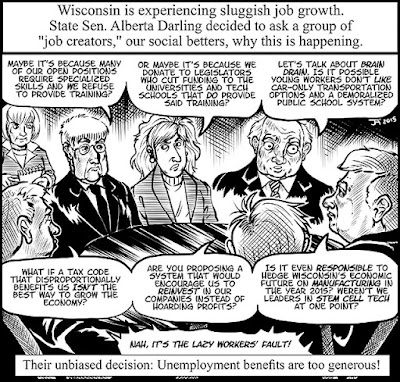 And you can add "screw over the ability for anyone in the middle class to improve their wages" to the corporatists' and WisGOPs' "solution." With 4 straight years in the bottom half of job creation, and Wisconsin's investment in higher education projected to stay at these reduced levels, how can anyone say this mentality is working?
Posted by Jake formerly of the LP at 9:04:00 AM