Wisconsin boomed in 2014? Guess you missed it

Today featured the Census Bureau's annual release of figures on incomes, poverty, and health insurance. The big headline is the drop in the uninisured nationwide, in the first year that Obamacare exchanges and expanded Medicaid were in full effect, and feel free to click on that report to break down the numbers further.

In addition, you also can look at the state-by-state data to see how Wisconsin measured up, as well as all the other states. We had the smallest drop in uninsured in 2014 in the Midwest (1.8 percentage points), but our uninsured rate is still 7th lowest in the U.S., at 7.3%. We'll see if that comes up at tonight's GOP debate.

But I want to look at the income part of that report, because those numbers were intriguing, especially in Wisconsin's case. First of all, the country's real median household income continued to stagnate, showing that while more people are working in the U.S. compared to the start of the decade, it doesn't mean they're making all that much more.

Interestingly, this official figure was bumped up in 2013 as part of a new survey that the Census Bureau created, as shown in the footnotes.

This resulted in 2013's median household income rising in 2013 of $52,789 for those who answered the old survey, compared to $54,462 in the new one (with a higher margin of error, due to the lower amount of people surveyed). But this is the higher base that 2014 was compared to, hence the small drop in income.

This change in survey resulted in some wide differences in incomes among the states in 2013, and Wisconsin was no different, looking much poorer than previously thought.

But by the same token, this means that Wisconsin had one of the largest increases in median household incomes in 2014, because last year's number is compared to the "new survey" in 2013.

10.5% increase in median income! Holy crap! Scott Walker and his spokespeople on AM radio must be right! It's really working!

Or not. I'm more than a bit skeptical of that figure (it is a sample, after all), and while the increase of more than $5,500 is enough to be statistically significant, it's not translating into most other economic measures, including Wisconsin ranking 38th in the nation for private sector job growth in 2014, and overall tax revenue having a massive shortfall in Fiscal Year 2014, and income tax revenues continuing to lag in Fiscal Year 2015. If we were really having increases in income of more than 10%, we'd likely see that reflected in strong job growth and robust income tax revenue growth- neither of which happened in Wisconsin in 2014.

And if Scott Walker tries to talk up these allegedly great numbers on Wisconsin income growth in 2014 at tonight's debate, he also should be forced to answer why Wisconsin was by far the worst in the Midwest in the same statistic in the first 3 years of his tenure in office. Especially in contrast to who was Number 1.

Take a look at how Wisconsin (in red) shoots up in stark contrast to everyone else in 2014. That leads me to think this number is an outlier that won't hold up. Also, I've put the old and new surveys for 2013 incomes, so you can see how those changed (and in many cases, it changed quite a bit). 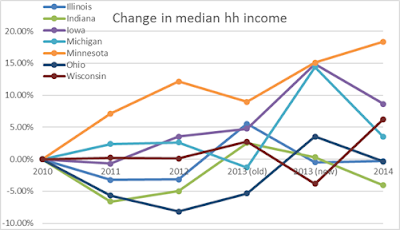 So why were we so badly beaten by our two neighbors to the west in the previous 3 years when it came to income growth? This especially should be asked in the case of Iowa, since Scott Walker is trying to convince voters in that state to follow the Wisconsin Way (and failing miserably).

Seems like something that might be worth investigating even more, but I'm betting Mr. Unintimidated won't want to talk about it. Like a lot of issues that he can't give a good answer for, come to think of it.