Wanted to follow up on Thursday's release of the Quarterly Census on Employment and Wages, with a couple of other looks at the data.

Not only did the June 2015 figures show a decline from the year-over-year increase in private sector jobs from the last report that ran through March, the 1.27% figure is the lowest since the end of 2013, and you can see a clear decline in growth levels starting around the start of this year. 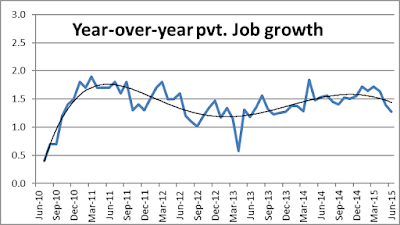 It's also worth noting that over 4 years since the passage of Act 10, the state has still never reached the 1.90% growth in private sector jobs that we had in March 2011...the month that Act 10 was jammed through the State Legislature. This is despite the U.S.'s job growth picking up over the same time period, and I have a hard time believing those two events are happening in isolation.

In addition, Chris Walker at Political Heat took a step back and looked at the record of the last 4 years, and the record in Wisconsin isn't good, nor acceptable.

When looking at jobs growth from the start of Scott Walker’s first budget in June 2011, however, there’s no mistaking it: we ARE dead last overall in the Midwest.

Wisconsin ranks 37th in the nation in job growth from June 2011 to June 2015. During that time, our growth rate was about 5.73 percent over four years.

I'll jump off that point and compare the 12 months before Walker's first budget took effect (going through June 2011), and then look at the individual 12-month periods since.

Not really the direction Wisconsin needs to be going, is it?