The WARNing about the state's unemployment claim stats

In the wake of the announcement of the Oscar Mayer plant closing in Madison, Assembly Democrats and others have questioned the direction of the state’s economy. In a press event last month, Katrina Shankland, the Number 2 Dem Rep. in the Assembly, claimed that Wisconsin was “on pace to double layoffs since 2014,” citing evidence from the state’s WARN notices.

To backtrack for a second, the Worker Adjustment and Retraining Notification (WARN) Act requires the State of Wisconsin to be notified if there is a large-scale layoff at a business, to help the state’s Department of Workforce Development move resources to help workers that may need assistance after such a massive job dislocation. The U.S. Department of Labor has a nice fact sheet which shows when WARN notices must be given.

Plant Closing: A covered employer must give notice if an employment site (or one or more facilities or operating units within an employment site) will be shut down, and the shutdown will result in an employment loss (as defined later) for 50 or more employees during any 30-day period. This does not count employees who have worked less than 6 months in the last 12 months or employees who work an average of less than 20 hours a week for that employer. These latter groups, however, are entitled to notice (discussed later).

Mass Layoff: A covered employer must give notice if there is to be a mass layoff which does not result from a plant closing, but which will result in an employment loss at the employment site during any 30-day period for 500 or more employees, or for 50-499 employees if they make up at least 33% of the employer's active workforce. Again, this does not count employees who have worked less than 6 months in the last 12 months or employees who work an average of less than 20 hours a week for that employer. These latter groups, however, are entitled to notice.

With the most recent WARN report for Wisconsin, dated last Friday, December 18, the state at just over 11,700 large-scale layoffs for 2015, vs a little over 7,200 in all of 2014. Not quite double yet, but likely to be reasonably close to it by the end of the year (especially if you count the over 1,000 people slated to lose their jobs at Oscar Mayer, which is not included in that 11,700+ number).

However, Wisconsin Politi-fact took a look at Rep. Shankland’s claim of "layoffs doubling" and said that it was "False." . With that in mind, I wanted to look into that ruling, and then go inside the numbers they use as well as other numbers to see if this ruling makes sense.

Here is Politi-fact’s argument. They say that WARN notices should not be used as an indicator of actual layoffs, and aren’t even that big of a factor when it comes to assessing the overall economy or total job losses.

In some cases [with WARN notices], layoffs take place immediately. In other cases -- such as with Oscar Mayer -- the plant closing is expected months later. In still others, they never take place.

So the numbers don’t represent actual layoffs. As such, experts say they are a lousy tool for assessing the state’s economy….

Shankland said Wisconsin "is on pace to double the number of layoffs this year."

She cited layoff notices received by the state. But those aren’t actual layoffs. And while she’s about right on the number of notices received, she’s wrong to suggest that the employment numbers are headed downward this year.

In the time frame she cited the state’s added about 30,300 jobs. We rate the claim False.

Actually, job growth is heading slightly downward (as I pointed out last week), but we aren't losing jobs on a year-over-year basis, so I get where Politi-fact is trying to go. In addition, the total number of unemployment claims has been consistently lower on a year-over-year basis in 2015 vs 2014 in Wisconsin, which underscores the differences between mass layoffs and overall layoffs. 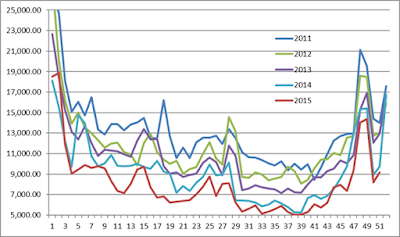 Sure, if a Republican said the same thing as Shankland did, I have no doubt Politi-“fact” would have found a way to turn it into a “mostly false” or “half true” (arguing, “well, she did mean mass layoffs……”), but I’ll agree things aren’t as disastrous economically as Shankland’s words would make them appear (“THANKS OBAMA!”).

However, note the part about Oscar Mayer in Politi-fact’s analysis, because it also gives a hint that things aren’t as good as the state’s reduced unemployment claims would indicate. Many of these pre-announced layoffs and plant closings haven’t happened yet, and many of those who lost their jobs have been receiving severance pay from the now-former companies, so they haven’t filed for unemployment as of this time.

That non-filing situation might change soon enough, which likely means unemployment claims will go up in Wisconsin during the early part of next year (even more than we usually see with the end-of-Holiday seasonality and cold weather). If those people that were laid off aren’t finding work to replace the jobs they lost, THEN you will see the real damage in the economic statistics for the state of Wisconsin, and Rep. Shankland’s claims might even pass the Politi-“fact” muster.

There is also something else that we should be skeptical of when we look at the state’s unemployment claim numbers. Workers in Wisconsin struggled to file their claims a couple of years ago using the state’s phone system, resulting in 1.7 million calls from people trying to get benefits being unanswered and later dropped in Fiscal Year 2013-14. Despite assurances that Scott Walker’s Department of Workforce Development fixed that problem, and that there aren’t any more calls being dropped, there has been no major follow-up report in the last year confirming that.

In addition, Walker and the GOP-run State Legislature has put up increasing barriers to citizens trying to file for benefits, including adding a one-week waiting period to receive benefits and requiring a drug test before getting unemployment. Both moves could keep some unemployed people from receiving benefits that they would have received in the past, or keep them from making the extra effort to apply even though they are entitled to do so.

Given that we already know that this administration came up with reasons to cut 15,000 people off of food stamps, despite there not being jobs available to get them off of assistance, is it unreasonable to think there might be a similar attitude out there to deny certain people from the unemployment benefits? Especially since a rise in unemployment claims would make the Walker/WisGOP leadership look bad, and go against their “It’s Working” spin?

In other words, just because Politi-“fact” decided to shoot down a claim from State Rep. Katrina Shankland on layoffs doesn’t mean it allows the GOP to claim there isn’t a problem. And it doesn’t mean that more shoes may well drop in 2016 that makes those claims of Wisconsin’s economic despair a lot more true.
Posted by Jake formerly of the LP at 5:23:00 PM