The fallout from December's rushed and partisan acts from the GOP Legislature and Governor Walker continues to bubble up. This week, it showed when new Attorney General Josh Kaul had to hold up a settlement in a case with the GOP-run Joint Finance Committee, instead of being allowed to complete the case on his own, as all previous AGs had. And since Kaul could not get Finance members to sign a non-disclosure pact regarding the proposed (and not finalized) settlement, nothing proceeded.

After Tuesday’s messy JFC meeting, we found out from the Milwaukee Journal-Sentinel’s Molly Beck that it wasn’t just that case that had been held up due to these new rules. The open cases include the resolution of defaulted debt at UW-Oshkosh Foundation (a scandal that led to the resignation of the university’s chancellor, and felony charges against that chancellor and an Oshkosh Vice-Chancellor), and several other cases that involve big money.

In another case, the state Department of Employee Trust Funds may have only a short time to resolve a lawsuit it brought against IT contractor Vitech Systems Groupbecause Vitech has been purchased by another company, Gibson wrote. Millions of dollars are at issue in the case, which is scheduled to go to trial in January.

Another case centers on a dentist who prosecutors allege owes the government as much as $8 million for cheating it out of Medicaid funds. The dentist has filed for bankruptcy and DOJ is trying to make sure that his filing won’t get him out of having to pay the government.

A fourth case involves a sewer service in Waupaca accused of improperly disposing of waste. A trial is scheduled for September.

The leaders of the committee, GOP Sen. Alberta Darling of Rivers Hills and GOP Rep. John Nygren of Marinette, told Kaul in a letter this month that they didn't consider the cases at a meeting last month because they didn't have enough information about the cases and weren't given enough notice about them.

A more cynical person might think that Nygren and Darling didn’t want some of these cases to go forward, especially if they involved certain friends/donors of WisGOP. And especially since most of the same JFC members tried to remove accountability for themselves 4 years ago by attempting to gut the state's Open Records Laws. 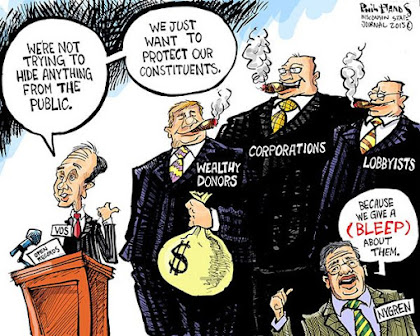 But I won’t be that person.

And then on Thursday, things got even screwier.

Republican leaders of the Legislature's finance committee hired an attorney at taxpayer expense Thursday to sign a secrecy agreement in an effort to end a standoff with Attorney General Josh Kaul.

But it's unclear whether the move will resolve the dispute triggered by new laws requiring the Democratic attorney general to get legislators' permission to settle lawsuits. …

The decision to hire Phillips was made by Darling and Nygren alone. The rest of the committee members didn't vote on the matter.

He will be paid $290 an hour, according to his contract with the committee. That's well below the $500 an hour that other attorneys recently hired by Republican lawmakers are being paid. Phillips specializes in assisting governmental entities, according to the bio on his firm's website.

Darling and Nygren said in a statement the action should meet Kaul's confidentiality needs and requested information related to a settlement he had asked lawmakers to take action on earlier this week but left their meeting empty handed.

But it turns out that there isn't a need for such a confidentiality agreement after all.

That's in a memo today from Rick Champagne, director of the nonpartisan Legislative Reference Bureau.

So taxpayers are shelling out $290 an hour on a no-bid contract that was never voted on or even debated in public, to “represent” the entire Joint Finance Committee when discussing settlements with AG Kaul. And it might not even be necessary to do so.

Prior to the Lame Duck laws, the AG got to handle these negotations and settlements, and then the Joint Finance Committee had a chance to review and/or change where the money went. Instead, WisGOPs are now putting in an extra layer of bureaucracy at taxpayer expense, and tying the hands of an AG elected by the people from doing the job he was voted in to do.

Remember when GOPs claimed they were the party of “fiscal conservatism” and “efficiency”? Not this ALEC Crew in Wisconsin! They want to screw up governance, make taxpayers pay more, while shielding their corporate donors from accountability for the damage to society that they have caused.

Maybe this possibility should have been discussed when the Lame Duck Laws were being jammed through back in December. But NOOOOO, GOPs only cared about taking away powers from the newly-elected Dem Governor and AG, and actually figuring out how this was going to work was a secondary thought. 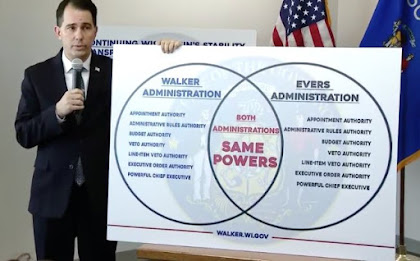 Did you think about this situation, Scotty?
I’ll remind you that every GOP in the Assembly and State Senate but one voted for this garbage. So THEY ALL GOTTA GO.
Posted by Jake formerly of the LP at 8:48:00 AM