Apparently there are fewer jobs in America than we thought.


The U.S. economy had about 500,000 fewer jobs in March 2019 than previously reported, government revisions show, suggesting that hiring was not as strong in the past year as it seemed. Hiring was weaker in retail, restaurants and hotels. The annual revision is much larger than is typically the case. The preliminary revision in 2018, for example, was just 43,000. Every year the Bureau of Labor Statistics updates its figures based on unemployment data that nearly all employers are required to file with the states. The current revision is one of the largest ever.

That news comes from the BLS’s mid-year benchmarking of total jobs, and complements today’s release by the “gold standard” Quarterly Census of Employment and Wages.

Worse, the current monthly jobs reports (the ones you hear the headlines on) claimed that there was a gain of 2.517 million jobs from March 2018 to March 2019. Now, the QCEW says the gain actually was 1.967 million jobs over that time period. That’s a decline in job growth of 550,000 jobs, and the monthly totals are now likely to be reduced by a significant amount next February, when the full-year benchmarking takes place.

UW's Menzie Chinn notes this downward revision is reported on job growth that had already slowed down during the Trump presidency. That slowdown came despite whatever stimulus might have come out the GOP's Tax Scam. 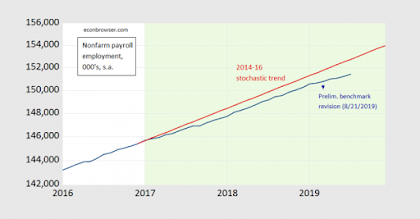 And oh yeah, that Tax Scam and the lower job growth led the Congressional Budget Office to tell us today that the US budget deficit will be even larger than the massive levels that were already projected.

Wisconsin also suffers in the QCEW report, as it says we only gained 3,395 jobs between March 2018 and March 2019. That’s less than what was being reported back in April, which was already a low 9,200 jobs, and ranks Wisconsin 46th in America for job growth over those 12 months.

It continues a disturbing trend where Wisconsin job growth has been consistently revised down for Scott Walker’s last year. In additions the year-over-year rate of growth for Wisconsin declined to the lowest levels since the jobs economy began its recovery in 2010. 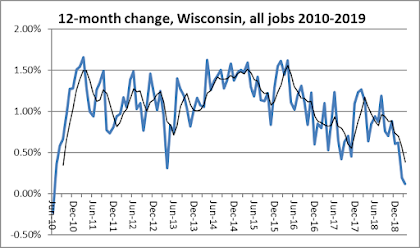 Wage growth was also muted for Wisconsin in this report, with average weekly wages up 2.6% from March 2019, slightly below the US rate of 2.8%. Our neighbors to the south and west had average salaries go up slightly more on a dollar basis.

That expanded the wage gap that Illinois and Minnesota has had on Wisconsin. All 3 states had wages grow from March 2011 through March 2019 (as you'd expect due to inflation and economic recovery), but Minnesota and Illinois each had their weekly wages grow by approximately $60 more than Wisconsin over those 8 years. 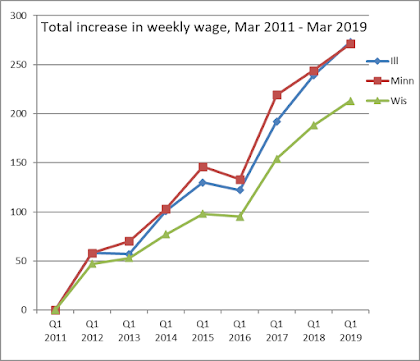 March 2011 is a fitting benchmark, because that was the month that Scott walker signed Act 10 into law. Didn't really make us better off, did it?

We pretty much knew GOP policies weren’t working out for America, but today’s information shows things weren’t even as good as we thought in 2018 and early 2019. And we know things have gotten shakier in the 5 months since then. Hoo boy.
Posted by Jake formerly of the LP at 5:34:00 PM