Wisconsin getting hit worse than most as US manufacturing goes down

We know manufacturing in the US has been struggling so far in 2019, and that especially seems to be the case for one of the most manufacturing-heavy states in America – Wisconsin.

Let's start with this headline that hit the wires today.


BREAKING: Manufacturing sector contracts for the first time in nearly a decade, according to IHS Markit https://t.co/TbbCmUnkeG


That comes from IHS Markit's monthly survey, and the reasons for the drop in manufacturing are especially concerning because future prospects look worse than the mediocre present , both in America and overseas.

The decline in the headline PMI mainly reflected a much weaker contribution from new orders, which offset a stabilization in employment and fractionally faster output growth.

New business received by manufacturing companies fell for the second time in the past four months during August. Although only marginal, the latest downturn in order books was the sharpest for exactly 10 years. Latest data also signalled the fastest reduction in export sales since August 2009.

Survey respondents indicated that a drop in sales often cited a soft patch across the automotive sector, alongside a headwind to manufacturing exports from weaker global economic conditions.

Those headwinds were already hitting the Upper Midwest, as the Milwaukee Business Times told us that a number of economic indicators show business conditions in Wisconsin's largest metro area were already in decline.

The Milwaukee-area manufacturing sector contracted for the second time in three months in July, according to the latest Marquette-ISM Report on Manufacturing.

The Milwaukee-area PMI dropped from 56.11 in June to 46.44 in July. Any reading below 50 suggests the Milwaukee manufacturing sector is contracting. The index has declined in seven of the last 12 months. 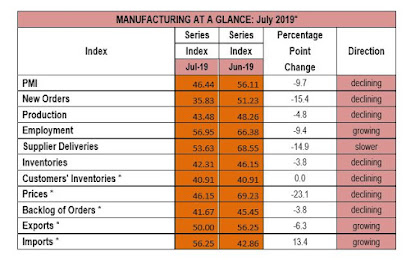 These are not good trends.
That supplements a report from a few weeks back that showed Wisconsin manufacturing falling faster than the rest of the nation.

Production workers in Wisconsin’s manufacturing sector averaged 39.7 hours per week in July, the lowest level for the month since 2009, according to Bureau of Labor Statistics data.

It was also the first time since February 2014 that production workers logged an average of less than 40 hours per week. The average number of hours worked has dipped below 40 just four times since the start of 2011.

The July hours worked number could be just a one-month dip below the 40-hour threshold, but it is the tenth straight month Wisconsin’s average has declined from the previous year.

In the past 12 months, Wisconsin has averaged a decrease of 1.14 hours compared to the prior year. The average decrease is 1.58 hours over the past six months. In both cases, Wisconsin has the sixth largest decrease among all states.

Along the same lines, last week’s Wisconsin jobs report showed manufacturers in the state shed 2,800 jobs in July, and have lost 4,100 total since January. It is reminiscent of the swoon that hit the state in 2015 and 2016, when 3,700 manufacturing jobs went away, and many blue-collars in Wisconsin turned to Donald Trump to turn their flagging fortunes around. Doesn't look like that gamble's paying off, is it?

Hmm, sure seems like Wisconsin's "Big Giveaway" tax cut to manufacturers isn't doing much to keep Wisconsin's factories humming these days, does it? We sure could use that $250 million a year to do something better than stuffing the pockets of "job creators" who aren't creating jobs or products these days.

Good luck having Trump and other GOPs showing up at factories to claim "we're tax-cutting our way to prosperity" by this time next year. Well, unless the workers in those factories are forced to show up at these photo ops in order to get paid.
Posted by Jake formerly of the LP at 5:47:00 PM