On Friday, we got more evidence that whatever job growth we have left in this country is largely leaving the Midwest behind. That came from the Bureau of Labor Statistics state-by-state report, which came out on Friday and noted that of the 25 states that have had statistically significant job growth over the last 12 months, exactly ONE is in the Midwest.

That one Midwest state? The "failing state" of Illinois!, at just over 1%. Meanwhile, there are 5 states in the Rust Belt/Midwest that Democrat Barack Obama won in both 2008 and 2012, but flipped to the GOP's Donald Trump in 2016. And all of them have seen their job growth stall out, especially compared to the rest of the nation.

And all 5 of those states have either complete GOP control of government, or have gerrymandered GOP legislatures tying up any progressive moves to adjust those states' economies. Seems noteworthy.

UW economist Menzie Chinn followed up with this note at Econbrowser, which shows that the three closest states that Trump won in 2016 are all showing declines in manufacturing jobs in 2019. This is even while manufacturing jobs throughout the country have continued to grow (albeit at a slower pace) in 2019. 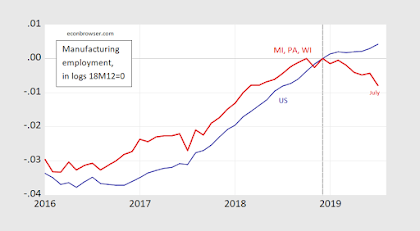 This is a story that Coastal corporate media doesn't see, but is quite obvious to us in the Heartland. And if Dems want to win big in 2020, they should hammer on Trump/GOP's economic policies, which might have made things better for the rich and corporate, but have left the Midwest even further behind the country than they were in 2016, when many rolled the dice with Trump to improve their stagnant lives.

That gamble's not really working out for those folks, is it? And it'll likely be worse by the time November 2020 rolls around, if 2019's declines in manufacturing and this week's drop in US consumer confidence is any indication.
Posted by Jake formerly of the LP at 11:53:00 AM