I noticed there was another Marquette University Law School Poll dropping today, and given the events going on in DC and Wisconsin's bellweather status, this seemed like kind of a big deal. And then I read the topline numbers and started laughing.

Support for impeachment has slipped in Wisconsin, according to Wednesday's Marquette University Law School Poll.

And for the first time, President Donald Trump has surged ahead of all four top Democratic rivals in potential head-to-head matchups....

In head-to-head matchups, Trump led former Vice President Joe Biden by 47% to 44%, within the poll's margin of error. In August, Biden led the president by 51% to 42%.

"Call it a small advantage to Trump," Franklin said.

That defied any kind of common sense, given recent events. So I immmediately went to the crosstabs for both October and November to see what might have changed.

At first glance, there’s not necessarily a huge shift in the (self-described) ideological breakdown of the MU Poll from last month. But it still went further right than the last poll, and that was already out-of-whack with who voted in Wisconsin 4 years ago.

Ideology of those answering, MU Law Polls vs 2016 exit poll

You add 2.8% conservatives and pull away 2.4% of liberals from the electorate and Trump does better. I’m shocked, SHOCKED!

Which explains a lot, because when you look at the head-to-head matchups, moderates didn’t change much at all in their preference for president between the two Marquette polls, with the exception of Joe Biden, who morphed down into “generic Democrat” in this poll.

But it’s not just the weighting, as some of the preferences of certain groups make NO sense when given the sniff test. For example, after a month’s worth of stories about Trump corruption and meltdowns, are we to seriously believe that “True independents” are now switching to TRUMP in big numbers? 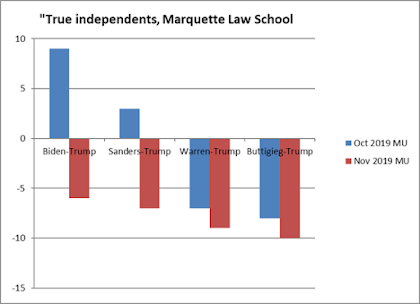 That doesn’t ring remotely true. Neither does this break down of alleged “liberals”, who were allegedly less likely to want to see Trump voted out after the last month.

Methinks Chuck Franklin got catfished by some righties thinking they were clever enough to hide what they really believed in when they were demographically screened. That's the nice version of what I think happened (the mean one is that he gave the Bradleys a result they wanted).

There’s one other finding that makes zero sense, and that involves the answers from ages 30-44. This is largely the Milennial generation that hates Trump, and many people in this age group voted for Hillary Clinton in 2016. But the November MU Poll says they have changed a lot in the last 3 years…and in the last month.

Does anyone honestly think that Milennials and Gen Xers under 45 have turned toward Donald Trump by 10-15 points in the last month? HELL NO. It's an absurd number, and even the MU Law Poll seemed to admit it, if you read between the lines.

Overall, new @mulawpoll finds consistent, although modest, shifts in WI opinion away from supporting impeachment and toward supporting President Trump in next year’s election. #mulawpoll


The impeachment part of the MU Poll is equally absurd, but I'll get to that at a later point. I'll just say that the numbers that came out with today are literally unbelievable, and should be thrown in the trash. But that won't stop our lazy media from reporting a Trump "gain" that is highly unlikely to exist in the real world.