Wisconsin and Minnesota - similar unemployment rates, not similar reasons why

I wanted to pass along this tidbit from the state-by-state unemployment numbers for October, which were released today by the Bureau of Labor Statistics.

At first glance, Minnesota and Wisconsin seem to be similar cases. Both states have had job growth level off in the payrolls survey (which usually delineate the "jobs added/lost" statistic), and both had their unemployment rates bottom out in 2018, with slight increases since then.

But when you break down the household survey that goes into determining the unemployment rate, the two states look very different. At the start of 2018, over 80,000 more Wisconsin residents were working compared to Minnesota. And now, after this most recent report, more Minnesotans have jobs than Wisconsinites. 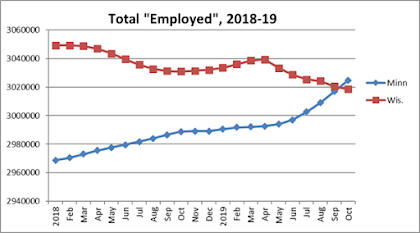 So how can they have a similar rise in unemployment over the last 12 months (with Minnesota’s being slightly more)? Because while Minnesota keeps adding people to their work force, Wisconsin has lost 20,000 since the start of 2018. 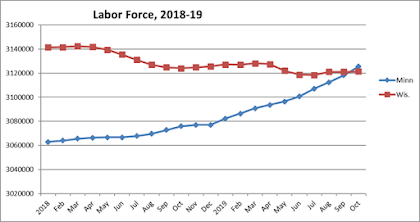 On the payrolls survey, the BLS says 27 out of 50 states have enough job gains over the last year to be considered statistically significant. But only one of those states are in the Midwest (Illinois), and none of the Midwestern states have job growth above 1% over the last 12 months. 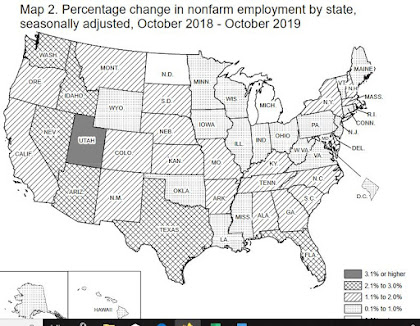 A small amount of this is a one-time effect due to the UAW strike, which was still going on as the October surveys were being done. That lowered job numbers, particularly in Michigan, which had a loss of 22,000 manufacturing jobs in a month where factory workers were on strike, and Indiana, which lost 5,400 manufacturing jobs in October.

But it’s still a noticeable lagging in a group of states that Donald Trump cannot afford to lose in 2020. And with most economic indicators stalling out and most of these Midwest states (outside of Minnesota) lacking growth in its population and work force, it's highly unlikely to be better in a year from now, as the election occurs.
Posted by Jake formerly of the LP at 7:06:00 PM