Wisconsin still declining, but many other states are also sputtering

The Federal Reserve Bank of Philadelphia released its updated coincident indexes of economic activity in all 50 states on Friday. And the map which accompanies this report seems to be quite telling. 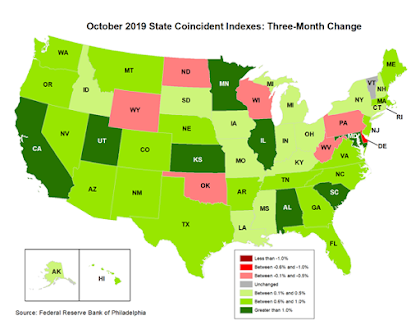 In addition to Wisconsin’s red shape of decline, note the pale growth in most of the Midwest (except for Minnesota and Illinois – the two Midwest states that voted for Hillary Clinton over Donald Trump).

What’s more disturbing is the 1 and 3-month diffusion indexes, which looks at how many states are doing good vs the ones doing bad.

That may sound good, but it’s actually the worst number for both of those statistics since early 2010, when we were dragging ourselves out of the Great Recession. And we’re at a similar type of decline to what was happening a year before each of the last 2 recessions hit. 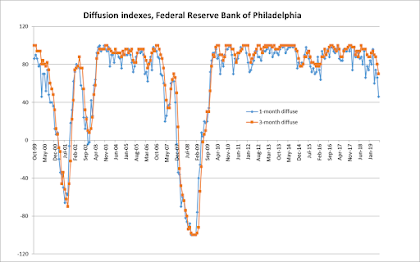 That being said, the recent economic news hasn't all been bad. Home sales and prices in America had a decent climb iin October. In addition,
consumer confidence had a bounce-back this month (although consumers indicated uneasiness going forward), and IHS Markit said there was a slight recovery in growth for both manufacturing and services in November after several months of slippage.

There has been a slight bump up in unemployment claims in the last few weeks, but it's not yet at the point that we are likely to see a decline in overall jobs in the US. But I'll also note that the DOW Jones hit a record high in October 2007, and 377,000 jobs were added in the last 4 months of that year, even though the chain of events leading to the Great Recession was already underway. As November has dragged on, it seems like we see more indicators that the 10-year expansion is on shaky ground, and that's especially true in the Midwest, where the economy has flatlined in many places.
Posted by Jake formerly of the LP at 11:12:00 AM