A massive March for both incomes and spending in America.

Given other recent economic reports and with tens of millions of Americans getting stimulus checks, we could have figured that US incomes and spending would have a big increase in March. And it sure did.

U.S. consumer spending rebounded in March amid a surge in income as households received additional COVID-19 pandemic relief money from the government, building a strong foundation for a further acceleration in consumption in the second quarter…. Consumer spending, which accounts for more than two-thirds of U.S. economic activity, increased 4.2% last month after falling 1.0% in February, the Commerce Department said. The increase was broadly in line with economists' expectations. The data was included in Thursday's gross domestic product report for the first quarter, which showed growth shooting up at a 6.4% annualized rate in the first three months of the year after rising at a 4.3% pace in the fourth quarter. Consumer spending powered ahead at a 10.7% rate last quarter. Most Americans in the middle- and low-income brackets received one-time $1,400 stimulus checks last month which were part of the pandemic rescue package approved in March. That boosted personal income 21.1% after a drop of 7.0% in February.

And while the stimmy checks are one-offs that won’t be as much in effect for April, it’s clear we took a big step toward getting out of the hole that we were in as 2020 ended. That’s true for the overall economy and in battling COVID-19, which played off each other to make things even more positive as Q1 ended.

The stimulus checks were even larger than the first checks that hit this time last year, and made up the biggest chunk of that income surge. But we also got a good bump up in wages and salaries, and Americans are finally earning more (in aggregate) on the job than they were in Feburary 2020. 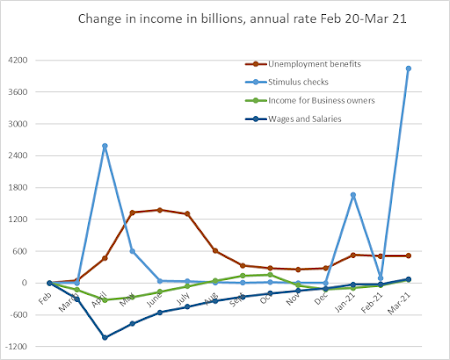 Likewise on the spending side, we have finally exceeded the level of real consumption that we had in February 2020, the last month before the COVID World started hitting the economy. 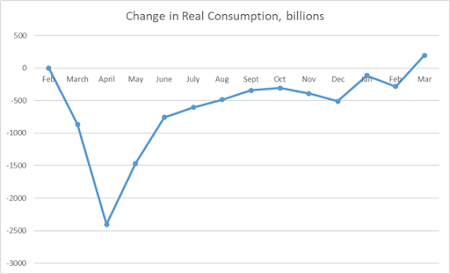 Consumption of goods boomed, with a 7.3% increase in March. Durable goods did even better, jumping by a massive 10.3%. Vehicles of all sorts had big Marches, with RVs and related recreational goods rising by 10.6%, and regular autos up by 13.6%. And Americans are buying many more of both types of vehicles than they were a year ago. 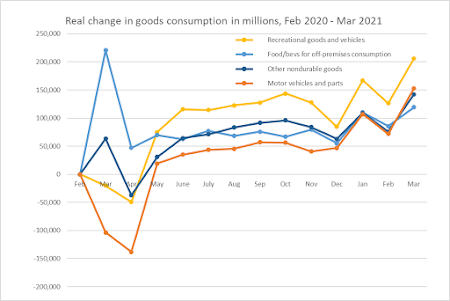 But we also saw a runup in spending on services as well, with an (annual rate) increase of nearly $140 billion. That's the largest one-month increase in that area since last Spring, when America emerged from the first wave of COVID lockdowns, and we especially saw a comeback in spending for food and accomodation services, which had been beaten up for well over a year of the COVID World. As more people felt safe enough to eat out and travel, that spending sector accounted for nearly $80 billion of that $140 billion increase in services for March. 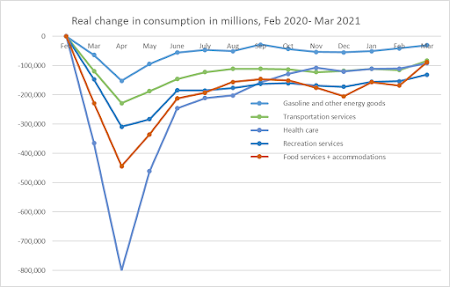 You can see that we are still not back to the pre-COVID levels for these services, so more work is needed to be done as 2021 progresses. But it is a strong sign of hope after a bleak winter in many of these areas. Combine that with stimulus assistance for restuarants that starts taking applications on Monday, and it helps explain why you are starting to see "Help Wanted" signs popping up at eating and drinking establishments in recent weeks. Overall, March was a time of great optimism and income boosts, as Biden’s stimulus package became law, weather warmed, COVID cases plummeted and immunizations were on the rise. There is no question that after a rough COVID Winter, our recovery from the virus-induced economic collapse got shifted into a new gear as we ended Q1 2020. But April saw weather moderate, COVID cases rise in several areas of the country, and the rate of immunizations start to slow down. Fortunately, unemployment claims continue to decline, but we have to keep working hard to defeat the virus and restore an economy that is still operating below pre-COVID levels in many areas.
Posted by Jake formerly of the LP at 8:43:00 PM