Retail sales figures confirm that US made big progress in March.

How’s a 10% surge in spending sound? Because that’s what just happened in the month of March (okay, 9.8%, to be precise). And don’t be fooled into thinking that number only sounds big because it’s compared with last March, the nadir of the pandemic. No, no. U.S. retail sales surged that much in March from February. In one single month. If they kept up that pace, that’s a nearly 120% annualized increase, or in other words, a more than doubling of total U.S. spending on retail items. Now, of course that pace won’t be kept up. But it helps to illustrate just how strong March sales were. Even if you average it out with the decline we saw in February and add in the nearly 8% surge in January, we’re now talking about a 35% annualized spending pace in the first quarter. I mean, that is really, really, extraordinary, unusual, jaw-dropping stuff. If you’re curious, March sales were up 28% from the prior (pandemic) year. Where is this all coming from? Stimulus payments “were a definite positive, but the main force driving sales up was an outsized increase in earned wages and salaries in March,” wrote economist Brian Bethune. Recall the U.S. added nearly a million jobs last month. Bethune thinks we could now hit 7% GDP growth this year.

That’s quite the jump, and the retail sales report from the Census Bureau shows that the growth was in plenty of different sectors. Change in retail sales, March 2021
Sporting goods/hobby/music/book stores +23.5%
Clothing stores +18.3%
Autos/auto part stores +15.1%
Bars/restaurants +13.4%
Department stores +13.0%
Home/garden stores +12.1%
Gas stations +10.9% It seems to be a good combination of stimulus checks, increased optimism on COVID, and warmer-than-normal March weather. And only the gas station number seems to be reflective of significantly higher prices. Even the one “disappointing” number in that report is due to these positive developments, as grocery stores went up by 0.5%. Which adds up because fewer Americans chose to stay tied to their homes in March. That being said, 1 year of the COVID World still shows how our buying habits have changed. While overall retail spending is up a seasonally-adjusted 17.1% compared to February 2020, (!) those increases are notably larger in the auto and for items to be consumed at home than they are for mall-type stores and bars/restaurants (who still have yet to reach pre-COVID levels). 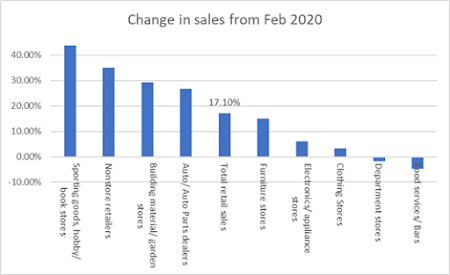 But overall, this is a big-time report, and indicates that we will see a big GDP number for Q1 2021 when it is released in a couple of weeks. Even with a cutback during a cold February, the Census Bureau says overall retail spending was up 7.7% in Q1 vs Q4 of 2020, with several sectors up by double-digits. The Atlanta Fed reacted to these big retail sales figures by boosting their estimates for Q1 by more than 2%, to 8.3% overall. 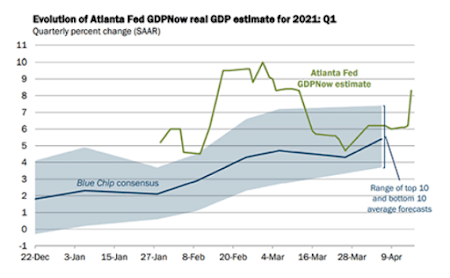 That being said, the damage from 2020 isn’t entirely fixed, and April has shown another resurgence of coronavirus cases along with an end to above-average temperatures for many of us. In fact, you have to wonder if the higher amount of COVID cases in April is related to March’s optimism, especially among the dimwits who traveled before they were fully vaccinated. So we can’t let up, either on the COVID front, or in having our government try to actively help the economy. Stay smart out there, folks, and don’t let GOPper-ganda sidetrack the progress that we’ve been making.
Posted by Jake formerly of the LP at 6:05:00 PM