Evers may be getting less stimulus funds that we thought, but lots is still in use

The Legislative Fiscal Bureau gave an update today as to how Gov Evers’ Administration has used the stimulus funds (officially known as the State Fiscal Recovery Fund (SFRF)), and how much more they will get. What the LFB found is that Wisconsin will get less money than expected, because its unemployment is lower than most other states.

To implement this provision, the U.S. Treasury Department used Local Area Unemployment Statistics (LAUS) data from the Bureau of Labor Statistics (BLS). Treasury was also required to make pro rata adjustments to the final allocations, pursuant to the requirement in ARPA that no state or the District of Columbia would receive less from the SFRF than it did from the Coronavirus Relief Fund established under the CARES Act. Based on the LAUS data, Wisconsin will receive approximately $2,033.2 million in SFRF funding based on its share of seasonally-adjusted unemployed individuals. Along with the $500 million equal share payment, the state will receive a total of $2,533.2 million from the SFRF. Wisconsin's total SFRF allocation declined compared to earlier estimates due to the state's seasonally adjusted unemployed individuals making up a smaller share of the national total of those individuals compared to earlier estimates. In order to receive its SFRF allocation, the state was required to submit a certification to the Department of Treasury that the funds were required and that the state would use the funds in accordance with the provisions of the Act. Treasury has indicated that it will provide payments from the SFRF in two equal payments to all states, unless the state's unemployment rate is greater than 2.0% above its pre-pandemic level at the time of the certification. Wisconsin therefore received half of its SFRF allocation in May, 2021, and will receive the remainder in 2022. If Treasury determines that any funds are subject to recoupment in 2022, due to improper use of the funds, the state's 2022 payment will be reduced by the amount that is subject to recoupment.

The LFB adds that local governments are still going to get similar amounts to what was expected back when the stimulus was signed in March. 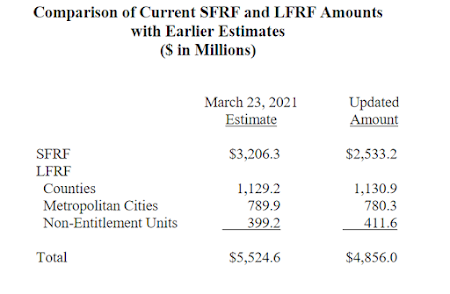 The Fiscal Bureau also gave an update on how much of this year’s $1.265 billion that the Evers’ Admin has handed out, and where it has gone. As you can see, almost $900 million has been designated, leaving less than $375 million to be determined out of the 2021 payments.

We've got a new update on how WI is allocating Am Rescue Plan dollars for state fiscal relief. The state is sending most of it to pandemic-affected businesses in the form of grants to small businesses, live event venues, and tourism-related companies. https://t.co/vwEhH9fthv pic.twitter.com/YtUApKeots

That last item reveals where the $100 million that Evers plans to add to Wisconsin schools would be coming from. It’s COVID relief funds from 2020, and then Evers plans to use the 2021 money to pay for other needs. But there are still details to determined, including how much each district would get.

In his message of the 2021-23 budget (2021 Act 58), the Governor announced that he would invest "more than $100 million in federal funds into our kids and our public schools." According to the administration, $100.0 million of the state's SFRF allocation has been transferred to cover costs previously covered by the CRF allocation received by the state in April, 2020. This allocation is being made to free up an equivalent amount of CRF funding in order to make $100.0 million in CRF funding available for school districts in the state. However, the actual CRF allocations that will now be funded with SFRF monies are not known at this time. In addition, the administration has not yet indicated how these funds will be distributed to school districts. Treasury guidance indicates that CRF monies may be transferred to school districts, and that school districts may use these funds to cover costs associated with either providing distance learning or re-opening in-person facilities. Treasury indicates that as an administrative convenience, expenses of up to $500 per pupil will be presumed to be eligible expenditures. As a result, school districts will not be required to document the specific uses of funds up to that amount. On a statewide basis, $500 per pupil would total an estimated $410.0 million in 2021-22.

Well, at least they can use it for however they want, which is a nice sign. It originally seemed like two separate payments would be a drawback on the billions in state aid, but it might actually work out for the better. It buys time for Evers and others at the state level to help smooth out the disruptions that the post-COVID world will have, and fill in gaps that may still exist due to the WisGOP Legislature's (in)actions on the state budget. On the political side, it allows for Evers to keep parceling out funds closer to the 2022 elections, when the average voter may be more likely to remember how this targeted aid made a difference, and kept things afloat in a still-challenging time.
Posted by Jake formerly of the LP at 7:49:00 PM